ISIS: Still Beheading Like It's the End of the World

Timothy Furnish continues to shine the light of knowledge on the foul darkness of the Islamic State Caliphate (formerly ISIS) and its apocalyptic dreams. 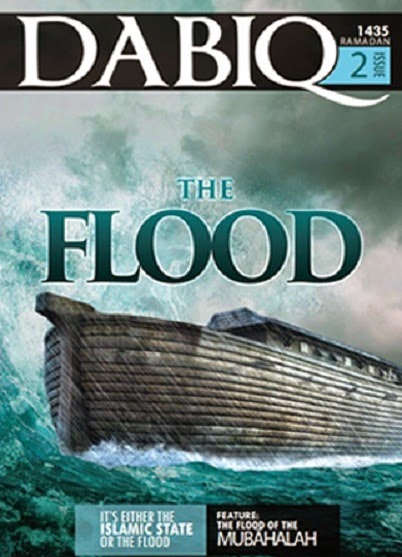 The “Islamic State” [IS], formerly the “Islamic State of Iraq and al-Sham” [ISIS or ISIL—the latter if one prefers “Levant”], ended Ramadan 1435/2014 with another issue of its propagandistic “Dabiq” magazine. (Issue #1 thereof, which had come out at the beginning of the Islamic holy month, I dissected here.)

This second issue is book-ended with apocalyptic references: p. 2 repeats the Abu Mus`ab al-Zarqawi (who went to meet the huris, 2006) quote—adduced several times in issue #1—about the spark that had been lit in Iraq eventually burning the “crusader armies in Dabiq;” while the final page excerpts a hadith foretelling the Muslim conquest of Arabia, Persia, Rome and the defeat of the Dajjal (the “Deceiver,” the Islamic antichrist figure).  IS’s flagship publication also brags that the group is coming for Palestine and, as per another hadith, that it will “fight the barbaric jews and kill those of them hiding behind the gharqad trees…” But the second installment of “Dabiq,” unlike the first, does not obsess about the End Times breaking into today’s Middle East; rather, it focuses like a Bond supervillain laser beam on two related topics: the Biblical/Qur’anic flood, and the Islamic practice of mubahalah.

The Flood, which is the title of the entire issue, is adduced because the Islamic State posits  the state of the world to be just as it was in the time of prophet Nuh—with even the Muslims so ignorant of true religion (Islam, of course) that they are in need of saving. And the Ark today is none other than the Islamic State, where true shari`ah is enforced and where no one is “free to choose”—because the witless masses are incapable of choosing religious truth, and so must have it imposed upon them.  Moderate Muslims who believe in choice and “peaceful means of change” are fools spouting “twisted methodology.”  Just as in prophet Nuh’s time, “it’s either me or the flood.”

“Dabiq”#2 goes on at length about “the widespread ignorance amongst the people”—meaning Muslims, who “are like a hundred camels amongst which you can’t find any that are fit for riding.”  Only by fleeing to the Ark of the Islamic State can Muslims be saved from “baathism, secularism, liberalism, democracy or anything else that would contradict the essence of tawhid [Islamic teaching of strict “oneness” of Allah].”

IS also devotes almost ¼ of this entire publication to explicating mubahlah and invoking it over against their opponents—mainly Jabhat al-Nusrah. Mubahalah comes from the verb bahala, which can mean either “to curse” or “to supplicate/implore Allah.”  It is, in essence, a religious ordeal in which two disputing religious parties summon Allah as witness to curse the incorrect/dishonest one.  It is referenced in Sura `Ali ‘Imran [III]:39ff, and explicated by later Muslim commentators as referring to a dispute between Muhammad and some Christians from Najran over the position of Jesus.  IS, perhaps feeling the sting of criticism from its erstwhile allies, challenges JN (as well as Syria’s Islamic Front) to trial-by-mubahalah—confident that it is entirely within Allah’s will.

The only other major theme which IS pushes in this issue of “Dabiq” is the demand for (Sunni) Muslims to migrate to the domains of the new caliphate, or if that is not possible at least to “organize bay`at (pledges of allegiance) to the Khalifah Ibrahim” among family, friends and neighbors and post them on the Internet.

Much of the rest of this magazine—some 18 pp. out of the total of 44—consists of photographs of the usual jihadist favorite subjects: dead Kurds and Shi`is, dynamited Shi`i shrines and mosques, triumphant bearded and heavily armed caliphal warriors “liberating” areas of Syria and Iraq. It ends with the aforementioned hadith predicting that the Muslims would go from conquest to conquest, ultimately prevailing over even the Dajjal.

1) This issue of “Dabiq” appears more defensive, indeed apologetic, than the first one.  The invoking of mubahalah clearly indicates that criticism from other Muslims (not from Obama or David Cameron) has had some effect.   Perhaps the rector of al-Azhar or the Grand Mufti of Saudi Arabia should take IS up on the mubahalah challenge, since the group clearly takes the issue very seriously and would have its legitimacy degraded by Allah failing to curse the Egyptians or Saudis (although IS spokesjihadists might try to claim that any negative events in those countries amounted to evidence of divine retribution for failing the test).

2) Once again, creating such a glossy and lengthy publication in English demonstrates that the newly-minted caliphate is trying to manipulate Western, or at least Western Muslim, public opinion.  Considering how many British (and perhaps also, now, American) volunteers it has attracted, continuing such a strategy makes sense.

3) Although, as already noted, this second installment of “Dabiq” is less eschatological than the first one, it does nonetheless continue to invoke Islamic apocalyptic themes—showing either that the IS leadership is enamored of the End Times, it knows the resonance of such a theme for many (Western/Westernized) Muslims—or both.

4) I would maintain that IS atrocities like the beheading of James Foley and the mass murders of Shi`is and Yazidis are, in effect, "bizarre rituals intended to bring about the end of the world"--or at least to spark the Mahdi's coming.  I truly think that IS has passed into the realm of trying to hotwire the apocalypse.   God willing no one is stupid enough to try and find "moderate ISIS" with whom to negotiate.