"We need to respect their ways and be tolerant... it’s our fault we get attacked." 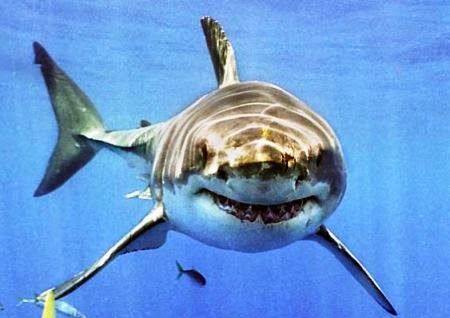 I recently spent some time watching Shark Week on television.  Being fascinated with large predatory fish, I’ve watched many shark programs throughout the years.  And I’ve reached one conclusion: the “liberal” response one is accustomed to when the topic of Islam and Islamists come up—that they are misunderstood, that we need to respect their ways and be tolerant, that it’s our fault we get attacked—has become so embedded in the Western psyche that it now colors our understanding of the animal world as well.


Almost every shark program follows the same pattern: the large predators are portrayed in all their grandeur, roaming the seas; then we hear of several anecdotes of shark attacks on humans, often with the survivors recounting their experience.

The prevalent theme is this: it’s not the shark’s fault that it attacked and maimed this or that surfer, swimmier, or kayaker.  Rather, humans are responsible for entering the shark’s domain, the ocean.  If anything, then, it’s the human’s fault for getting attacked.  Even great whites, so we are assured, only attack humans by mistake, never intentionally. Finally we get the speech about how sharks are in fact the one’s being mistreated by humans, etc.

To those familiar with the way liberal talking heads constantly whitewash the violence and intolerance of Islam, does this not all sound familiar?  From the notion that “it’s our fault” we got attacked, and we “had it coming,” to the idea that we need to be more “understanding and respectful,” the “progressive” memes are all there.

Similarly, two types of survivors often recount their experiences.  Most explain how they do not at all blame the shark that attacked them; more magnanimously, others say that, since they lost this or that appendage, they have dedicated their lives to protecting sharks.

The second, more atypical kind of survivors openly demonize sharks and come off less “enlightened.”  Such was this one Australian survivor I watched, who seemed the quintessential “hillbilly”—missing teeth and all.  He appeared on one of the programs emphatically declaring that all sharks are “evil.”  In other words, he was something of an ignorant, bigoted “sharkaphobe.”

One important caveat: I am not “hating on” sharks, suggesting they are “evil,” or siding with this or that perspective.  But as a rational person, I know that sharks—especially great whites, bulls, and tigers—are dangerous creatures.  As animals of instinct, I do not believe they have the capacity to act “good” or “evil,” but I do not doubt that, given the chance and especially if hungry, they will attack and eat humans.  (See this atypical article, for example, which suggests that “thousands of missing drowning victims actually die of shark attacks.”)

Rather, the point here is that this business of always apologizing for Islamic violence, insisting that it is some sort of misunderstanding, which “enlightened” Western persons should be patient of if not completely overlook, has so penetrated society that it has metastasized to almost anything and everything that is potentially dangerous, including ravenous sharks.

Nor does the analogy end here.  When Western liberals hold Muslims to a lower standard than the rest of humanity—ignoring the beheadings, massacres, rapes, enslavements, and church burnings habitually committed by the likes of the Islamic State, Boko Haram, Al Shabaab, et al.—are they not, in essence, placing such Muslims on a “subhuman” level?  Are they not placing them on the level of wild animals—sharks for instance—that are not responsible for their actions?

In the end, however, the shark analogy fails.  After all, sharks attack and kill for survival—like the rest of us carnivores—whereas the Islamists intentionally attack, torture, rape, massacre, mutilate, and incinerate humans simply for not being Muslim.

That is the definition of evil.