"The International Society for Human Rights (ISHR) explains that attacks against Christians are far from isolated cases and that all Christians and Christian converts arriving in Germany are victims of harassment, threats, pressure" and physical violence from Muslims. 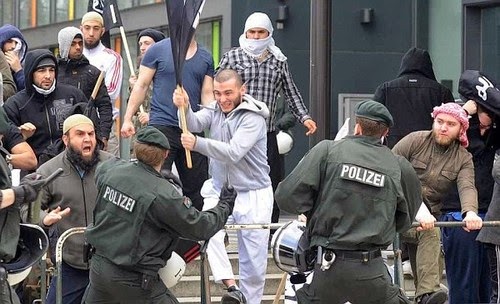 Christians persecuted by Muslims in Islamic countries who think they are escaping their fate by fleeing discover that the same treatment awaits them in Europe, which after all has simply imported Islam's barbarism by opening its doors to large numbers of Muslims.

The German daily newspaper Die Welt reports on the terrible exclusion and violence suffered by Christian refugees at the hands of Muslims in Germany's asylum centres.

Germany is the second country in the world, after the US, for number of asylum applications received, with 13% of them last year, and the first in Europe, with 23.2% last year.


The report starts with some figures:

In Iraq, there are currently 30,000 Christians fleeing. But these are only those who are currently in the main news. Worldwide suffering estimate by humanitarian organisation Open Doors is around 100 million Christians under persecution. The organisation World Watch List 2014 has particularly strict Islamic countries - such as Somalia, Syria, Iraq, Yemen, Iran, Saudi Arabia and Pakistan - among the ten states with the worst persecution of Christians.

An example of the discrimination suffered in German reception centres for refugees is what happened to Leyla S, an Iranian whose Christian faith compelled her to flee to Germany about three years ago with her husband and daughter.

The woman related to Die Welt her experience in the reception centre in Hessen, where about 20 of the approximately 100 other refugees cursed the family from the beginning again and again as “infidels” and “dirty dogs” and banned Leyla from the two kitchens.

"For two years", she says, "we always had to cook in our room. Once I tried to go in the communal kitchen, but the Muslim refugees from Afghanistan housed in the centre immediately chased us away, claiming that our presence rendered the food impure.

"Why then are these people coming to Germany, home to millions of Christians, who for them are unclean, although not their money?"

Die Welt also exposes the wall of silence of the authorities. In the refugee camps of Baden-Württemberg, North Rhine-Westphalia and Hesse, those responsible say that there are no cases of discrimination, while in reality they happen under the roofs of the refugee camps. The incidents take place in silence, hidden from the police.

Max Klingberg of the International Society for Human Rights (ISHR), an organisation that for 14 years has been working with refugees, explains that attacks against Christians are far from isolatd cases and that all Christians and Christian converts arriving in Germany are victims of harassment, threats, pressure.

And psychological violence sometimes leads to physical violence. In the case of an Iranian Christian convert, a woman, Muslim men urinated on her clothes and other personal effects to humiliate her.

The situation is so bad that in Bavaria, in order to stop the violence, separate accommodation for different religious groups of refugees has been requested.

Since the moment of his arrival at the reception centre Ramin, an Afghan refugee who converted to Christianity, has been threatened by three Muslim countrymen with whom he shared the room. He recounts: "They said that I belonged to the Dar al-Harb [house of war, as Islam calls all the part of the world which is non-Muslim] and not the Dar al-Islam [house of Islam]." For the three Afghan Muslims, Ramin deserved death as an infidel and apostate.

The man tells of various attacks, including one that led very close to his death: "We were in the room when my three roommates beat me in the kidneys with the remote. When I managed to wriggle out, one of them went into the kitchen and took a knife. I then attempted to flee in another room, but another had blocked the door with his foot. At that moment I was shaking, I turned to Jesus asking Him to save me. Then one of the men pointed the knife to my chest, saying that it would be impossible for me to stay alive for much longer. Fortunately, the other two reminded the man that he had to suspend for the time being his revenge, since he had yet to complete his application for political asylum."

In line with the constant denial of Muslim supremacism and Islamic persecution of Christians, authorities more often than not don't deal with these cases of hatred. An Iranian 19-year-old Christian tried to escape his Mohammedan tormentors by asking for a transfer to another city. The local council refused the application on the grounds that the dispute had nothing to do with religion but was purely personal.

Peter Ulrich, director of a free school for asylum seekers managed by the Evangelical Free Church, says that Christians are much closer to European culture and far better capable of integration than Muslims. No surprise here.

"In my work as a teacher of German language" he adds, "I have observed that many refugees from Syria, Iraq and Iran seek asylum precisely because of religious persecution. They are disappointed and irritated by how often their problem is not taken seriously by the authorities of our country, from which they instead expect understanding and support."

The solution is pretty simple not just for Germany but for all of Europe: give asylum to Christians, deny it to Muslims.