Exiled Archbishop of Mosul: 'I have lost my diocese to Islam; you in the West will also become victims of Muslims'

"You must consider our reality in the Middle East, because you are welcoming in your countries an ever growing number of Muslims. You are in danger... If you do not understand this soon enough, you will become the victims of the enemy you have welcomed in your home." 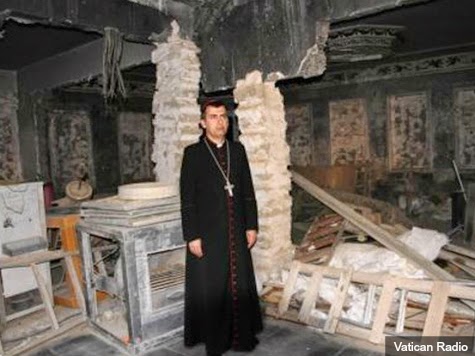 The exiled Chaldean Catholic archbishop of Mosul, Iraq, is warning westerners about welcoming an increasing number of Muslims into their countries, naively believing that they too believe in democratic principles.

“Our sufferings today are the prelude of those you, Europeans and Western Christians, will also suffer in the near future,” said Archbishop Amel Shimoun Nona in an interview by Corriere della Sera. “I lost my diocese. The physical setting of my apostolate has been occupied by Islamic radicals who want us converted or dead. But my community is still alive.”


The archbishop’s interview was reported by the blog Rorate Caeli.

Nona, whose Eastern Rite church is under the authority of Pope Francis, now lives in Erbil, in Kurdistan, Iraq.

Please, try to understand us. Your liberal and democratic principles are worth nothing here. You must consider again our reality in the Middle East, because you are welcoming in your countries an ever growing number of Muslims. Also you are in danger. You must take strong and courageous decisions, even at the cost of contradicting your principles. You think all men are equal, but that is not true: Islam does not say that all men are equal. Your values are not their values. If you do not understand this soon enough, you will become the victims of the enemy you have welcomed in your home.

CNSNews.com observes the Chaldean Catholic Church can be traced back to Thomas the Apostle, one of Jesus’s original twelve apostles. The actual diocese of Mosul was established in 1967, with the main church being St. Paul’s Cathedral.

As Breitbart News reported last month, over one million Christians have been killed or have had to flee Iraq because of persecution by radical Islamists.

Breitbart News National Security Editor Dr. Sebastian Gorka explained: “ISIS has basically given an ultimatum to all the Christians left: You can either flee or convert to Islam, or we will kill you.”