St Kosmas of Aitolia (Aug 24) - Equal to the Apostles, Holy Neo-Martyr under the Muslim Turks

- Life, Teachings, and Significance of a Modern-Day Apostle -

"The impact Father Kosmas had on the people-both lay and clergy-was such that he was considered a saint many years before he was cruelly put to death by the Turks. The secret of his great success was due, above all, to the fact that he not only preached the Gospel but lived it in such a way that many who heard him were moved to follow in his footsteps."  (Nomikos Michael Vaporis, Life of St. Kosmas Aitolos together with an English Translation of his Life and Teachings, Source.)

During these early years of the Third Jihad, where Christians from Africa to the Middle East, and from Central Asia to Indonesia, are being just as viciously persecuted by Muslims as Christians were in previous centuries, we must turn for sure and salvific guidance to the lives and teachings of the Holy Confessors and Neo-Martyrs under the Turkish yoke, as well as those under the first wave of jihad in the seventh and eighth centuries, and the second jihad in the twelfth through fifteenth centuries. This is why I feature posts on the saints of the Orthodox Church, who balance bold refutations of the false religion of Islam with pure Christian catechism, and who witness to Christ by their very lives.

So it is with St. Kosmas Aitolos, who embraced the call of missionary to the Greek people, strengthening them in their faith and through his patient preaching, teaching and establishing of Christian schools, rallied the Christians to resist the pressures exerted on them by their Muslim overlords:

Kosmas had made up his mind to do missionary work, and he could think of no better place to do so than in his homeland, particularly in the remote corners of the rugged peninsula where the lack of churches and flight from persecution had dimmed the light of Christianity. He was determined to revitalise the Christian spirit of every isolated village of Greece and to bring back to the forlorn the age-old Hellenic pride which the Muslims had ground into the dust. (Source)

At the same time, St. Kosmas taught his Christian flocks to love and forgive their enemies with the love of Christ Himself:

"We who are pious Christians, should love our enemies and should forgive them. We should feed them. We should give them drink. We should pray to God for their souls and then say to God: 'My God, I beg you to forgive me as I forgive my enemies'. But if we don't forgive our enemies, even if we shed our blood for the love of Christ, we'll go to hell." (Source)

For one who is growing in Christ, striving to abide in Him and to incarnate His divine commands by the grace of the Holy Spirit, the resisting of evil while showing practical love and forgiveness for one's enemies poses no dilemma. We stand for Truth and resist the lies of the enemy of mankind — for Jesus Christ is the Way, the Truth and the Life — yet in standing for Truth we deny ourselves and take up our cross, following Him who forgave His enemies even as they crucified Him.

Truth is undiminished by suffering but rather exponentially magnified, and forgiveness of our enemies takes nothing away from the Truth, but rather expands to cosmic dimensions, uniting us to Christ who forgave all mankind through His Passion.

The lessons provided by St. Kosmas are especially important for us today, when Christians may be tempted to murderous hatred and vengeance by their Muslim persecutors. And the obverse is also true, that a vigorous Christian catechesis is needed now in our post-Christian wasteland, to strengthen Christians against the false religion of Islam, the "Same God" and "Abrahamic Faith" heresies, inter-religious dialogue, and the spiritual deception which lulls even noble Christian hierarchs and patriarchs into defending Islam as a "religion of loving peace" and other such absurdities.

May the Lord Jesus Christ strengthen us to abide in Him, He who is the WAY, the TRUTH and the LIFE, and preserve us against false teachings, against a "different Jesus, a different spirit, a false gospel" (see 2 Cor. 11:3-4, Gal. 1:6-8).

Seventeen centuries after the eminent St. Paul travelled across Greece, a solitary man of God traversed the sandy country from border to border, sea to sea, and island to island in a magnificent religious tour de force which stoked the fires of Christianity and the flickering hopes of a people straining under the yoke of Turkish oppression and despairing of a return to their ancient culture after nearly four centuries of brutality. This rare specimen of Hellenic Christianity was named Kosmas, a man whose devotion to God and country brought about a resurgence of the Christian spirit of Greece and anticipated the revolution which was to cleanse this proud country of the oppressors with which it had too long been infested.

St. Kosmas was not only a priest but a prophet, scholar, patriot, and miracle-worker as well, and each of these to a degree that merited sainthood. The beginnings of Kosmas were inauspicious enough; he hailed from a village called Mega Dendron, Aitolia, where he was born in 1714, the son of a simple weaver whose wife was extremely devout and who undoubtedly influenced her son in his selection of a religious career. He was baptised Konstas and attended public schools, thereafter to be tutored by a family friend, Archdeacon Ananias. After spending some time as a teacher, Konstas decided to attend a school at the Monastery of Vatopedi on the Holy Mountain of Athos, after which he entered the Monastery of Philotheou where he was tonsured a monk and given the name Kosmas. In rapid succession he became a deacon and then priest.

Kosmas had made up his mind to do missionary work, and he could think of no better place to do so than in his homeland, particularly in the remote corners of the rugged peninsula where the lack of churches and flight from persecution had dimmed the light of Christianity. He was determined to revitalise the Christian spirit of every isolated village of Greece and to bring back to the forlorn the age-old Hellenic pride which the Muslims had ground into the dust. He prevailed upon Patriarch Seraphim II to give him a carte blanche to travel wherever he may be needed for whatever period of time necessary for his mission, and as a preacher at large was given a patriarchal blessing to carry out his noble purpose without interference and with complete independence of action. In some of the more remote villages, where no priest had been seen for years, Kosmas found adults who had not been baptised, a situation which he remedied and which gave him added impetus in his crusade. 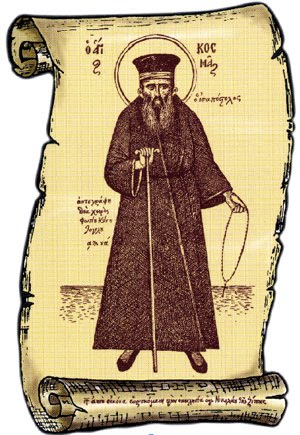 When word of his valiant missionary zeal reached his old monastery, one of his fellow monks saw fit to make public Kosmas' prophetic powers. Some of his prophecies the people of the time could not comprehend, for Kosmas is not only on record as having predicted that people would be able to converse with each other even though they were miles apart (the telephone), but he also foresaw in the eighteenth century that man would devise a means of flying, and while in flight, unleashing a powerfully destructive force. Over a period of twenty-five years of undiminished zeal, Kosmas travelled not only throughout Greece and its beautiful islands, but he even journeyed through neighbouring Albania.

His prodigious feats in the name of the Lord included the founding of over, 200 schools, charitable institutions, and small churches in rural areas where itinerant priests could conduct the sacred liturgies as often as possible. Wherever he preached he had a habit of planting a cross, as a result of which his crosses dotted the countryside and served as reminders to passersby that somebody cared what happened to them and that God had not forsaken them. 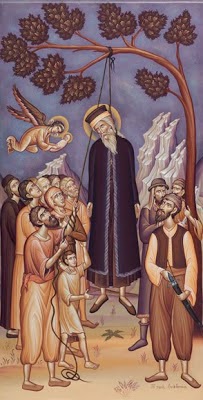 St. Kosmas had trod on Muslim toes, and in the area of Ioannina he was arrested on spurious charges of conspiracy, found guilty, and hanged on 24 August 1779. On 21 April 1961 he was canonised a Saint by the Church -- although he had been revered as one since his death in ceremonies presided over by the late Patriarch Athenagoras who had always admired the gallant Kosmas.

Icon at right: The Martyrdom of St Kosmas by hanging. Notice the angel receiving his soul in the form of a little baby.