Robert Spencer investigates the fatwa issued by the Spiritual Directorate of Muslims of Russia and finds it contains certain historical inaccuracies and misleading assertions. 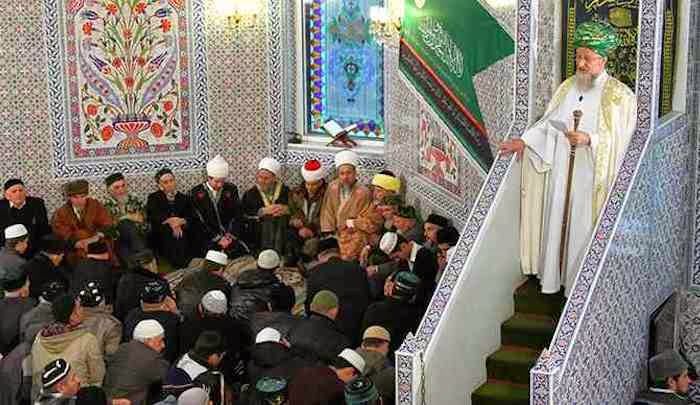 It is telling that the Spiritual Directorate of Muslims of Russia recommends that Islamic State members should be killed — apparently it takes for granted the Sharia death penalties for heresy and apostasy. Also, this is still more window dressing to lull the Infidels into complacency, as I show in my comments below.

A major Russian Muslim group has issued a fatwa against the so-called Islamic State (IS, formerly ISIS/ISIL) reviling them as ‘enemies of Islam’ and calling for the punishment of all its members as criminals.

The Spiritual Directorate of Muslims of Russia published the text of the fatwa on its website on Tuesday.

“The members of the Ulama [Islamic scholars] council, on the basis of the Koran and Sunna and other legal sources, have shown and proved that all actions of the organization that calls itself “Islamic State” are contradicting Islam – starting from the creation of the group and calls for resettlement and finishing with their cruelty and public executions,” the document reads.

“From the point of view of the Muslim canon the members of such criminal groups deserve either capital punishment or full lifelong isolation from the society,” the Russian Muslim leaders stated. However, they noted in the fatwa that every suspect must be convicted by a court verdict that would fully exclude all doubts of his or hers complicity in violence, robberies and killings.

“The followers of ISIS are mistakenly interpreting Islam as the religion of brutality and cruelty, of violence, torture and killings of all discontent,” the Russian Muslims stated. In reality, the basic principles of Islam forbid to kill civilians, prisoners and envoys – and journalists and workers of humanitarian missions can be described as the latter, they added.

Where could the Islamic State have possibly gotten the idea that brutality and cruelty and violence had anything do with Islam?

Koran 5:33: “This is the recompense of those who fight against Allah and His Messenger, and hasten about the earth, to do corruption there: they shall be slaughtered, or crucified, or their hands and feet shall alternately be struck off; or they shall be banished from the land. That is a degradation for them in this world; and in the world to come awaits them a mighty chastisement.”


“Narrated Abu Qilaba: Anas said, ‘Some people of ‘Ukl or ‘Uraina tribe came to Medina and its climate did not suit them. So the Prophet ordered them to go to the herd of (Milch) camels and to drink their milk and urine (as a medicine). So they went as directed and after they became healthy, they killed the shepherd of the Prophet and drove away all the camels. The news reached the Prophet early in the morning and he sent (men) in their pursuit and they were captured and brought at noon. He then ordered to cut their hands and feet (and it was done), and their eyes were branded with heated pieces of iron, They were put in ‘Al-Harra’ and when they asked for water, no water was given to them.’ Abu Qilaba said, ‘Those people committed theft and murder, became infidels after embracing Islam and fought against Allah and His Apostle.'” (Bukhari 1.4.234)

Most importantly, the creation of a caliphate is only possible by approval of all Muslim communities and otherwise is considered a mutiny. “A single-sided declaration of caliphate would cause numerous competing caliphates to appear and this would cause strife and disagreement between Muslims,” the fatwa reads.

“Most importantly, the creation of a caliphate is only possible by approval of all Muslim communities and otherwise is considered a mutiny.” In that case, the Umayyad, Abbasid, Shi’ite Fatimid, and Ottoman caliphates, as well as the caliphate of the Rightly Guided Caliphs Abu Bakr and Ali ibn Abi Talib, were all “a mutiny.” The Umayyad caliphate was established with violent disapproval from the party of Ali — the Shi’ites. The Abbasids supplanted the Umayyads. The Ottomans declared a caliphate while there was still an Abbasid caliph in Cairo. Abu Bakr was chosen despite the objections of the party of Ali, and Ali’s caliphate was contested by Muawiya.

In December last year, the Russian government listed the Islamic State and the Al-Nusra Front as terrorists, outlawing membership or any support for these organizations under threat of criminal prosecution. In addition, the Russian Foreign Ministry called upon all nations to recognize the two groups as terrorists, noting that such a step would be backed up by UN Security Council resolutions.

In March this year, the head of Russia’s State Security Council, Nikolay Patrushev, called upon the international community to abandon double standards on terrorism and start fighting the threat in line with universally-recognized norms of international law.

Patrushev also told reporters that he and other Russian officials preferred to use the term ‘Islamic State’ in quotation marks to avoid insults to true Muslims who, in his view, had no relation to terrorists and extremists. For the same reason he called to refer to it by its original name – the Islamic State of Iraq and Levant, or ISIL.