Armenian Orthodox Church to Canonize All Victims of the Armenian Genocide

As I have written here before, the term 'genocide' is a secular one, but as Christians, we speak of the 'Martyrs', the 'Witnesses for Christ' (the Greek word 'martyria' means 'witness').

The Canonization of the Holy Armenian Neo-Martyrs of the Early 20th Century should be seen as one of the Great Symbols of the 21st Century. The Armenian Genocide — which actually endured from 1894 to 1923, and in which some 1.8 million Armenians were killed by the Muslim Turks — was one large component of what Archimandrite Nektarios Serfes has written of as The Orthodox Christian Holocaust.

During 1914-1922, 1.75 million Greek and Pontian Christians were also killed, and another 100,000 Syriac and Nestorian Christians were slaughtered, bringing the total number of Christians martyred by the Turkish Muslims from 1894-1923 to approximately 3,650,000.

This is a great cloud of witnesses, indeed.

Armenian Orthodox Church to Canonize All Victims of the Armenian Genocide
Interfax via Pravoslavie, April 22, 2015

The Armenian Apostolic Church will canonize all victims of the Armenian genocide on April 23.


"The main event is scheduled for April 23: canonization by the Armenian Church of all genocide victims. Over half a million of people will be named as martyrs for faith and the fatherland," Archbishop Yezras (Nersisyan), the head of the Novo-Nakhichevan and Russian Diocese of the Armenian Apostolic Church, said in an interview published in the Monday edition of the magazine Ogonyok.

Archbishop Yezras said events devoted to the 100th anniversary of the genocide of Armenians in the Ottoman Empire will be conducted in different countries in the next few days. Church services will take place and all organize Armenian communities will hold memorial events, including concerts, the opening of khachkars (traditional memorial steles bearing a cross) and exhibits of archive materials.

One hundred bell chimes will be given in Christian churches.
"We have received a blessing from His Holiness Patriarch Kirill of Moscow and All Russia. On this day, which is important to our brotherly Churches, bells will also chime on the cathedral of Christ the Savior and a cathedral choir will sing Our Father and Holy Lord in Armenian," the archbishop said.

The exhibit entitled "Russian View of the Genocide of Armenians" will open in the Great Patriotic War Museum in Moscow's Poklonnaya Gora. 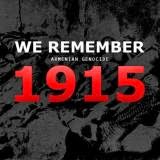 On April 24, the world will mark the 100th anniversary of the genocide of Armenians in the Ottoman Empire. Some 1.5 million people fell victims to the mass killings. However, Turkey does not officially recognize this fact.

On April 12, Pope Francis served a mass in memory of the victims of the genocide of Armenians. The mass was attended by Armenian President Serzh Sargsyan.

During the mass, the pope called the mass killing of Armenians in the Ottoman Empire genocide. That was the first time a pope used the term "genocide" referring to the 1915 events.

The Turkish Foreign Ministry sharply criticized the pope's statement and summoned the Vatican ambassador to Turkey for explanations.