Boston University is hosting a conference on Mahdism, May 3-4, entitled 'Apocalyptic Hopes, Millennial Dreams and Global Jihad' with some impressive speakers, including Islamic history and eschatology scholar Timothy R. Furnish, whose articles are often featured here at Facing Islam.

The two other speakers with whom I am familiar are:
If you are able to attend, by all means make every effort, as this promises to be a significant event. Anyone attending, I would be very interested posting your review, summary and impressions of the conference. Contact me through my profile listing in the left-hand column. 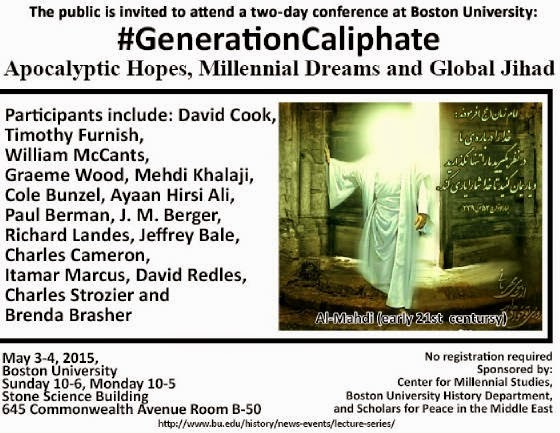 Tim exuberantly shares, "My paper is entitled 'Rejecting Millennial Time: The Ottoman Empire's 700-year War against Mahdism in its Realm'.  I'm honored to be sharing the stage with the likes of the august folks listed above!"


Read more of Tim Furnish's preview of his talk at his website,  MahdiWatch.

Below are the highlights from the Boston University Event Listing:

Sponsored by the Center for Millennial Studies, Boston University History Department and Scholars for Peace in the Middle East.

Most Westerners associate the terms apocalyptic and millennial (millenarian) with Christian beliefs about the endtime. Few even know that Muhammad began his career as an apocalyptic prophet predicting the imminent Last Judgment. And yet, for the last thirty years, a wide-ranging group of militants, both Sunni and Shi’i, both in coordination and independently, have, under the apocalyptic belief that now is the time, pursued the millennial goal of spreading Dar al Islam to the entire world.

In a manner entirely in keeping with apocalyptic beliefs, but utterly counter-intuitive to outsiders, these Jihadis see the Western-driven transformation of the world as a vehicle for their millennial beliefs, or, to paraphrase Eusebius on the relationship between the Roman Empire and Christianity: Praeparatio Califatae.

The apocalyptic scenario whereby this global conquest takes place differs from active transformative (the West shall be conquered by Da’wa [summons]) to active cataclysmic (bloody conquest). Western experts have until quite recently, for a wide range of reasons, ignored this dimension of the problem.

And yet, understanding the nature of global Jihad in terms of the dynamics of apocalyptic millennial groups may provide an important understanding, both to their motivations, methods, as well as their responses to the inevitable disappointments that await all such believers.

The now defunct Center for Millennial Studies at Boston University (1996-2003) brings to the public one final conference on apocalyptic beliefs, co-sponsored by the BU History Department and Scholars for Peace in the Middle East (SPME).

This event is free and open to the public.

*All events will take place in the Stone Science Building (645 Commonwealth Ave), room B50

Paul Berman
Read “Why is the Islamist Death Cult So Appealing?” (2015) Here

Cole Bunzel
Read “From Paper State to Caliphate: The Ideology of the Islamic State” (2015) Here