“Russia is fraternally sharing this sorrow with us.” —Ara Abramyan, Union of Armenians of Russia 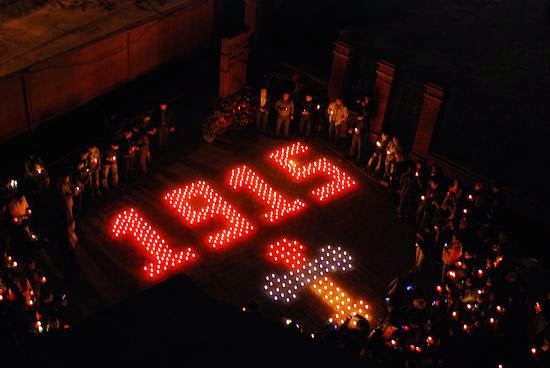 (Moscow) Several hundred events dedicated to the 100th anniversary of the Armenian genocide will be held in the Russian Federation, reports TASS. This information was received on Monday by the journalists from head of the Union of Armenians of Russia Ara Abramyan.

“Hundreds of events will take place in 640 Russian cities and towns. They will include a memorial concert at the Column hall of the House of the Unions, round tables with participation of politicians, members of the Russian Academy of Sciences, the Civic Chamber, the State Duma,” he noted. “Russia is fraternally sharing this sorrow with us,” Abramyan added.

The mournful anniversary will be marked on April 24.


In Moscow on April 22 the World without Genocide memorial evening will be held at the Column hall, and on April 19 the Armenian diaspora will give a performance entitled, “The Court is in Session!” featuring Armen Tzhigarkhanyan, Dmitry Kharatyan, Olga Kabo and other noted actors. The drama will present to the audience the documentary evidence collected on the basis of the Berlin archive of 1921.

Furthermore, in April the Russian Academy of Sciences will hold a large-scale academic conference called Genocide in the History of the 20th Century. Photo exhibitions, memorial concerts as well as film screenings dedicated to the tragedy will be arranged in Moscow as well.

The international recognition of the Armenian genocide (including recognition by Turkey) is an inevitable historical process, also said Abramyan.

“Today Armenians have no hatred for the Turkish people, we all understand that the genocide was initiated by the politicians,” he stressed. In Abramyan’s view, “even at the time of the massacres in Turkey there were people who saved Armenians, and nowadays the majority of representatives of the Turkish intelligentsia circles cannot help but recognize the fact of this genocide.”

“The reasons behind the genocide as well as elimination of its consequences depend on the politicians,” said Alexander Mkrtchyan, board member of the Union of Armenians of Russia. “However, various countries still have certain political interests that may lead to a new genocide of different nations: we have witnessed the ongoing tragic events in the Ukraine, for example in Odessa,” he accentuated.

“The present spreading of this policy of tyranny worldwide indicates that now it is especially necessary to raise the voice of the international community in order to prevent repetition of a genocide against other nations,” said Abramyan in conclusion.