Kenya: Laughing Muslims taunted Christians as they massacred them, 'This will be a good Easter holiday for us'


“We have come to be kill and be killed,” the Muslims screamed out as they shot the Christians.

Where did they get the idea to scream out something like that? From the Qur’an:

“Indeed, Allah has purchased from the believers their lives and their properties for that they will have Paradise. They fight in the cause of Allah, so they kill and are killed.” (9:111)

Not that this has anything to do with Islam! 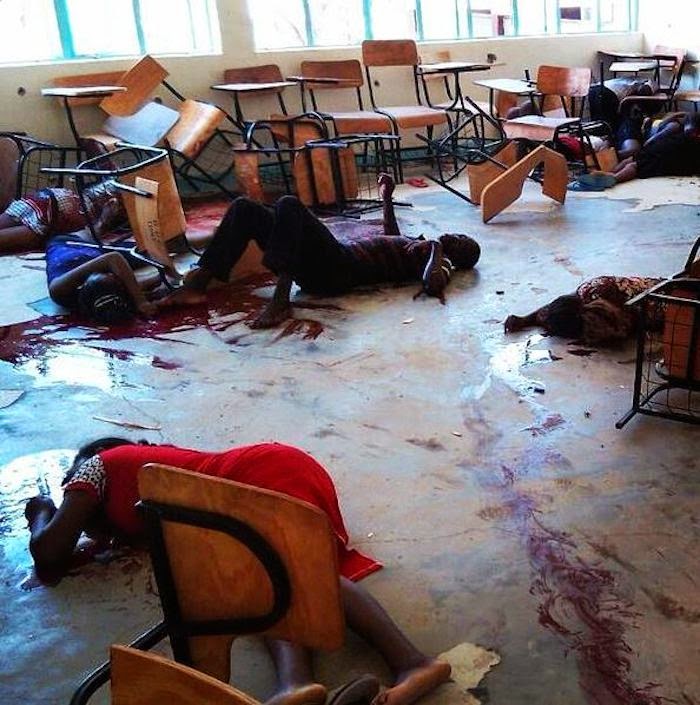 Garissa (Kenya) (AFP) – Piles of bodies and pools of blood running down the corridors: survivors of the Kenya university massacre described how laughing gunmen taunted their victims amid scenes of total carnage.

Salias Omosa, an 20-year-old education student, said the victims were woken up at gunpoint in Thursday’s pre-dawn attack, and Muslims and non-Muslims picked out by “how they were dressed”.

“‘We don’t fear death, this will be a good Easter holiday for us,’ the attackers were shouting in Swahili, then shooting their guns,” Omosa recounted, still trembling with terror and sitting in the refuge of a military camp.


Omosa managed to escape amid the carnage at Garissa University, after seeing two of his friends executed by the Al-Qaeda-linked attackers, who he said were wearing masks and military-style uniforms.

“I have seen many things, but nothing like that,” said Reuben Nyaora, a clinical officer working for the aid agency International Rescue Committee (IRC).

“There were bodies everywhere in execution lines, we saw people whose heads had been blown off, bullet wounds everywhere, it was a grisly mess,” Nyaora told AFP.

Nyaora had rushed with colleagues from his normal work with an IRC ambulance team in the giant Dadaab refugee camp, some 90 kilometres (50 miles) away.

He was one of first frontline medics to enter university halls, providing first aid to both survivors and troops wounded in the heavy fighting.

“We were giving first aid during the fighting – and there were soldiers being shot right in front of us, as well as the casualties among the hostages,” the 32-year old Kenyan told AFP, his voice trembling.

“Then when we went into the halls, it was too horrible, too awful to imagine, and yet we saw it,” he said.

“Everyone seemed dead, but then as we talked, some students who had been hidden for hours came out – some from wardrobes, others from the ceiling, and then others who had lain down with the dead, covered in blood, hidden among their friends who had been killed.”

He described how he witnessed three women apparently dead, covered head to toe entirely in blood but in fact physically unharmed, pick themselves up from a pile of corpses.

“The ladies said the gunmen had screamed out in Swahili as they shot the men: ‘We have come to be kill and be killed,'” Nyaora said.

“Then they told the women to ‘swim in the blood'”, as though they were making fun of them, playing games and apparently enjoying the killing, he said, before moving on after apparently forgetting to shoot them too….