Saint David, the Great Komnenos and Last Emperor of Trebizond, and His Martyrdom for Christ 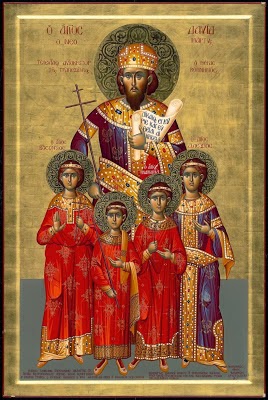 Today marks the first celebration of the feast of the newly-canonized Holy New Martyrs David the Great Komnenos together with his three sons and his nephew Alexios. Below is some information about these Holy Martyrs and the reasons for their honor and celebration:

It was 15 August 1461. Mehmed the Conqueror, after a brutal siege, occupied the capital of the Great Komnenoi, in Trebizond. The final strong bastion of Orthodoxy and Hellenism in the East ceased to illuminate. The empire was extinguished and our heritage was turned over to others. The Greeks of Pontus lived difficult and critical moments. Many times they felt the breath of death. And yet this death in this bastion of Hellenism, which is called Pontus, saw nothing but upright souls and indomitable resolve.

David, the Great Komnenos and last emperor, was a hostage in the hands of the Conqueror together with his three children and his nephew and successor Alexios V and displaced in Adrianople. The salvation of Trebizond was certainly impossible.

It is certain that the brutality of the conquest was lessened because of the capitulation. It is common that for any catastrophe only the leaders bear responsibilities. But the real causes are inherent in complex situations and a sober diagnosis cannot be determined. He who had the misfortune to govern in the last hours and experience the shock of catastrophe, is also charged offhanded as a coward and traitor. Such a double victim was the emperor David.

Here we must stress that there were many who considered resistance futile and were urging to resolve through capitulation, hoping that it would lessen the evil and wrath of the Conqueror. But we are interested in the end of the Emperor.

The anonymous synaxarion in a few lines refers to his martyric end:

"On the 26th of March of the 11th Indiction in the year 1463, on a most bitter Saturday, at the third hour, our Holy Master and King of Trebizond lord David the Great Komnenos, was incarcerated in the Tower of Adrianople, in chains."1

"On November 1st, a Sunday, in the fourth hour of the night, he was executed by sword together with his three sons and his nephew, in the year 1463, the 12th Indiction, in Constantinople."2

These above notes of the synaxarion are found in a Gospel parchment manuscript of the Monastery of the Theotokos on the island of Halki. Now the manuscript with its memories can be found in the skeuophylakion of the Ecumenical Patriarchate.

When David appeared before Mehmed he gave him two choices: to stay alive as long as he renounced his faith or for him and his entire family to be killed. From this terrible proposal David chose the second option, saying boldly to Mehmed: "No torture is going to bring me to the point of renouncing the faith of my fathers." So David went to eternity exchanging his royal crown for the halo of a martyr.3

Whoever has occupied themselves with the tragic end of the Trebizond Empire has classified David among the chorus of martyrs, expressing the common consciousness of the fullness of the Church.

Savvas Ioannides in his History and Statistics of Trebizond writes:

"The Greeks, to their honor, boast of two emperors: one who died bravely fighting for his country, Constantine Paleologos, and one who was martyred for his faith, David the Great Komnenos, the last Emperor of Trebizond.

"For there have been many martyrs for the faith in many places, and even today in inaccessible Christian villages there have been martyric prosecutions. And it is fair that the first of all to be remembered is the last of the Great Komnenoi, David, together with his children and relatives, who preferred a martyric death instead of living and receiving honors, as we have seen others do: those who wished for the temporal rather than eternal and ephemeral honor, instead of that which comes from God and man."5

The scholar Archimandrite Panaretos Topalidis, abbot of the historic Monastery of the Honorable Forerunner Vazelonos, in his erudite work titled Pontus Over the Centuries, comments as follows regarding the martyric end of the Emperor:

"... and then after some months he was cruelly faced with the dilemma, either to forswear or be slaughtered with his children. He preferred the second and saw the slaughter of his sons and his nephew Alexios, and together with them he was slaughtered on the hill called 'Pegioglou' by the Turks, which according to texts, on the other side of this hill Constantine Paleologos fell in battle and was killed. And so was fulfilled the martyrdom of Hellenism in the person of its two emperors: the one who was killed in battle for the defense of freedom, and the other slaughtered in testimony for the faith."6

"David was a tragic hero, and by his death he sealed the history of the Great Komnenoi. Fate did not desire to grant him the death of a warrior, but ordained for him a martyric end by being 'perfected with the sword'."7

From these testimonies and opinions, we effortlessly conclude that we stand before a crowned martyr vindicated by God the just Judge, yet unjustly treated by all of Hellenism, since his sacrifice is neither highlighted nor his martyrdom honored. There are many reasons why the martyred King was not properly honored. But now we, the descendants and heirs of the Trebizond Empire, should highlight the common consciousness regarding his martyrdom for Christ, and pay him what he is due as sons of the beloved homeland, and verify the golden-mouthed saying which says: 'Just as the sun will not embarrassingly extinguish, the same goes for the memory of the martyrs."8

The ever-memorable former Metropolitan of Leontopolis, Sophronios Efstratiadis, in his scientific work titled The Hagiologion of the Orthodox Church, writes the following regarding our debt to the martyrs who were in obscurity without due honors being attributed to them:

"Wherefore we have a sacred duty to resurrect the dead of the earth and the living in heaven, and for the Church to ascribe to them her glory - the beauty, the forms and the names of the heroes of the faith - who through their blood and through their life established her foundations and are part of her undefiled crown, diamonds fallen from the precious crown, a sacred treasure of our faith. We have a sacred duty to seek and find the stars hidden by the clouds and place them among the heroes of the faith."9

King David willingly sacrificed everything: fatherland, nation, existence and family for the love of Christ the heavenly King. He is the good beginning among the New Martyrs of Pontian Hellenism. For this reason we should not neglect and cover over with a veil of silence the martyric death of David the last emperor of Trebizond for many serious reasons related to our nationhood, our Orthodox consciousness and the future of our historical development.

We must honor the day of his martyrdom, proving to all those who delivered to obscurity this person and his martyric end, that the children of those who were uprooted, as the years go by, that not only are they not forgotten, but rather with sacred awe they address their sacred history, they study and learn the lessons, values and power and proceed to sail around the world in the Argo that did not stop her journey. The children of the Pontians do not forget, because they have within them the voices of their fathers, as trumpeted by the ever-memorable Leonidas Iasonides: "May our throats become dry, if we forget you, O Pontian earth."