Book of Jihad (In the Vast Majority of Mosques in America)

For related info, see my post, Challenging Mosque Expansions, which presents four separate studies over the last fourteen years which document that upwards of 80% of mosques in the U.S. preach violent jihad, Islamic supremacism, sharia and the overthrow of the U.S  Constitution, and/or sell books (like the below Riyadh Salheen) which advocate the same.

See also my post, 'Time for Some Serious Questions' Revisited, which discusses the doctrine of jihad, how it is obligatory on all Muslims, and how it is mandated in the Koran, the hadiths, and the text published by Al Azhar University in Cairo (the foremost authority in Sunni Islam), The Reliance of the Traveller.


As you travel your city, stop in the local Muslim bookstore or the local convenience store with the “We Sell Halal’ sign out front. As them if they have a video or book section. See what you find.

via For the American Public: Riyadh Salheen: Book of Jihad (In the Vast Majority of Mosques in America) 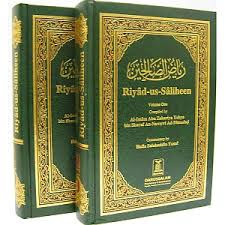 Riyadh Salheen is a set of Sunni books discussing all aspects of Islam. This violent and hate filled manual is in virtually every Sunni mosque around the world, and yes in America. If you have the desire to self study and to become educated on ‘Pure Islam’, you must study Riyadh Salheen. It is not fun, easy, and it will take you a lot of precious time, but you must decide if understanding the enemy (The Islamic Ideology) is worth your time. This manual alone should be enough for the IRS to take away the protected 501 non profit status of mosques in America. —Dave Gaubatz

Allah, the Exalted, says: “And fight against the Mushrikun (polytheists, pagans, idolaters, disbelievers in the Oneness of Allah) collectively as they fight against you collectively. But know that Allah is with those who are Al-Muttaqun (the pious).” (9:36)

“March forth, whether you are light (being healthy, young and wealthy) or heavy (being ill, old and poor), and strive hard with your wealth and your lives in the Cause of Allah” (9:41)

“Verily, Allah has purchased of the believers their lives and their properties for (the price) that theirs shall be the Jannah. They fight in Allah’s Cause, so they kill (others) and are killed. It is a promise in truth which is binding on Him in the Taurat (Torah) and the Injeel (Gospel) and the Qur’an. And who is truer to his covenant than Allah? Then rejoice in the bargain which you have concluded. That is the supreme success.” (9:111)

“O you who believe! Shall I guide you to a trade that will save you from a painful torment? That you believe in Allah and His Messenger (Muhammad (PBUH)), and that you strive hard and fight in the Cause of Allah with your wealth and your lives: that will be better for you, if you but know! (If you do so) He will forgive you your sins, and admit you into Gardens under which rivers flow, and pleasant dwellings in `Adn (Eden) Jannah; that is indeed the great success. And also (He will give you) another (blessing) which you love: help from Allah (against your enemies) and a near victory. And give glad tidings (O Muhammad (PBUH)) to the believers.” (61:10-13)

The Qur’anic Ayat relating to the subject under study are many. The Ahadith are also many; these include the following:

1285. Abu Hurairah (May Allah be pleased with him) reported: The Messenger of Allah (PBUH) was asked, “Which deed is the best?”

He (PBUH) replied, “Faith in Allah and His  Messenger.”

He (PBUH) replied, “Jihad (holy fighting) in the Cause of Allah.”

Then he was asked: “What is after that (in goodness)?”

He (PBUH) replied, “Hajj Mabrur (which is accepted by Allah).” [Al-Bukhari and Muslim].

Commentary: This Hadith has already been mentioned. See Hadith No. 1274. Different acts have been regarded more meritorious in different Ahadith. For this reason, some scholars have performed the justification that the word mun “whoever” is the keynote in such cases. That is, such and such acts come in the category of eminent acts or they have been mentioned with reference to circumstances and time or place. For instance, at certain times or at certain places or for certain persons, performing Salat in the early prescribed hours is more meritorious, or Hajj through representative or Jihad is more meritorious, etc.

Some scholars are of the opinion that the eminence of different acts has been stressed keeping the person addressed in view. Linguistically, the word “Hajj” means `journey to a place one respects’. Technically, it means `journey to Makkah in order to perform the pilgrimage rites.’ The word “Mabrur” is from “Birr” meaning obedience, piety, but it signifies here an act which is done sincerely without committing a sin.

1286. Ibn Mas`ud (May Allah be pleased with him) reported: I asked the Messenger of Allah (PBUH): “Which action is dearest to Allah?” He (PBUH) replied, “Performing As-Salat (the prayer) at its earliest fixed time.” I asked, “What is next (in goodness)?”

He (PBUH) said, “Kindness towards parents.” I asked, “What is next (in goodness)?”

He (PBUH) said, “To participate in Jihad in the Cause of Allah.” [Al-Bukhari and Muslim].

In 2009 we told you about another book on sale in Islamic bookstores across the U.S. is Maududi’s Jihad in Islam:

Islam wishes to destroy all states and governments anywhere on the face of the earth which are opposed to the ideology and programme of Islam regardless of the country or the Nation which rules it. The purpose of Islam is to set up a state on the basis of its own ideology and programme, regardless of which nation assumes the role of the standard-bearer of Islam or the rule of which nation is undermined in the process of the establishment of an ideological Islamic State.