Why Putin is ‘Most Powerful’ 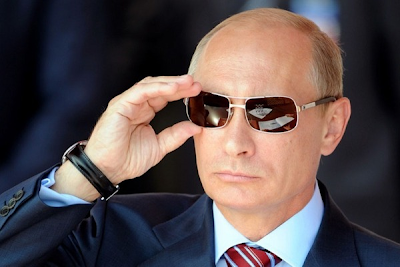 In her presentation of the list, Forbes correspondent Caroline Howard writes,

Putin has solidified his control over Russia while Obama’s lame duck period has seemingly set in earlier than usual for a two-term president — latest example: the government shutdown mess. Anyone watching this year’s chess match over Syria and NSA leaks has a clear idea of the shifting individual power dynamics.

According to the World's Most Powerful People 2013 list compiled by Forbes, recent weak displays on the international stage - from inaction on Syria to the Government shutdown - have seen the US president knocked off the top spot he held last year.

Putin's strengthening control in Russia, meanwhile, has resulted in what Forbes described as a clear "shifting of individual power dynamics"...

However, neither Forbes, nor the Independent, nor ABC, nor any of the other news sources I checked for this story mention Putin's firm repudiation of Islamic extremism as a factor in his standing. Yet it is precisely Putin’s famous scolding of Obama and UK Prime Minister David Cameron back in June for their insipid support of cannibalistic jihadists in Syria, and his equally strong rejection of Western military intervention in Syria during his toe-to-toe with Obama at the G20 meeting in St Petersburg, Russia which stand out among this year’s most dramatic tête-à-têtes on the international stage.


At the end of it all, Putin won, checkmating Obama, even while providing him with a relatively gracious exit from the limb of military strikes onto which he had climbed and on which he had been busily sawing away for the last year with his puffed-up, “red-line” rhetoric. 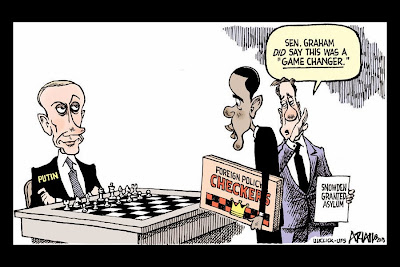 Domestically, Putin has moved decisively against Islamic extremism, recently having some 300 jihadists rounded up. Russia under Putin’s leadership has also this year banned a certain translation of the Koran as “extremist literature,” and earlier did the same with a collection of Hadiths about Muhammad.

These “power dynamics” tell the “how,” but when it comes to the “why,” Putin stands on principle concerning Syria, Egypt and Muslim persecution of Christians generally, standing head and shoulders above the feckless US and UK Islamophiles, who are enabling the jihadists’ goal of the extermination of Christians from the region.

A recent conference of scholars and historians in London termed the persecution of Christians “genocide” and even “apocalyptic.” Much of this can be directly attributed to the jihad-enabling policies of the Obama administration over the last four and a half years.

Witness the outcry of Christian leaders across the Middle East, who have had enough of Obama’s support of the Muslim Brotherhood in Egypt, and of Al Qaeda and Al Nusra in Syria, and even of Boko Haram in Nigeria, prompting Syrian Christians to press the U.S. Congress, “Why is America at war with us?”  Raymond Ibrahim has analyzed Obama’s policy as a “proxy war on Mideast Christians.”

Indeed, it is now open season on the globe’s must vulnerable population, a tiny and dwindling Christian minority amidst a sea of Muslims, expedited by the Obama administration’s support of Muslim extremists in literally every theatre. Small wonder then that protesters in Egypt display posters and placards condemning Obama for supporting terrorists, and that human rights organizations in Egypt are filing suit in the International Criminal Court against Obama for “crimes against humanity.”

What significant effect comes from inner orientation. Obama has consistently sought to empower the Muslim Brotherhood (recall how he insisted to Mubarak in 2009 the then-outlawed organization be invited to his speech at Al Azhar University in Cairo), and then — in Libya and Syria — Al Qaeda and Al Nusra, perhaps hoping to rehabilitate them into partners for democracy. But the net effect has been a dramatic escalation of genocidal persecution against not only Christians, but other Muslims (such as the Alawites in Syria) as well.

Putin, on the other hand, has gone on record with his intent to protect indigenous Christians against Islamic extremists, even while reaffirming his country’s Orthodox Christian heritage as the foundation for Russian civilization, both in the past and looking ahead to the future. 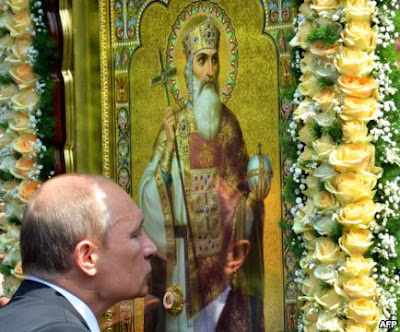 Contributing to Putin's strength is the symphony of theology, thought and policy between the Russian government and the Russian Orthodox Church. The Russian President’s personal involvement with events this past Summer celebrating the 1025th anniversary of the Baptism of Rus into Orthodox Christianity, and his extensive meetings with Orthodox Christian leaders in Moscow and St Petersburg during the event, were clearly in concert with conciliar efforts by Patriarch Kirill of Moscow to affirm Orthodox and Eastern Christian ties in the face of rapidly escalating persecution at the hands of extremist Muslims.

The linkage is clear from Putin’s remarks to the hierarchs:

At a time when people are again in a search for moral supports, millions of our fellow citizens see them in religion and trust the wise pastoral guidance of the Russian Orthodox Church. Her selfless service of education is extremely called for and her public authority and peace efforts are aimed at strengthening harmony and stability and restoration of historical relations between our peoples and with our compatriots abroad…

This strengthening of Orthodox Christian ties is central to Russia’s foreign policy as well:

Putin noted that in many regions of the world, especially in the Middle East and North Africa, inter-confessional tensions were growing and the rights of religious minorities including Christians were infringed upon. “I believe” he said, “this acute problem should become a subject of close attention of the international community. Our country will continue pursuing an active creative policy towards the soonest possible settlement of conflict situations. And here, of course, the active stand, participation and support of Local Orthodox Churches and their primates are very important for us.”

Putin’s ranking by Forbes also stems from his strength and clarity in defending Russia’s homeland and traditional Christian values against a complex assault from international homosexual activists, Protestant proselytizers, domestic Muslim extremists, and other opponents of traditional Russian-Christian culture.  Many have criticized Putin’s Russia for its at times “heavy handed” approach, but Rod Dreher considers the issue with some fairness, giving Putin 1.5 cheers in the process. 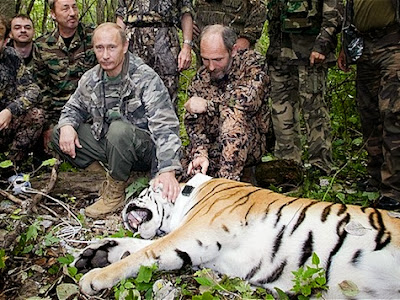 It is always important for us to remember than no earthly ruler is perfect, and there shall be no earthly paradise. Anyone who promises that is an antichrist, and attempts to create paradise by communists and fascists have led to tens of millions killed over the last century alone. “Put not your trust in princes, in sons of men in whom there is no salvation,” we are reminded in the scriptures. But at the same time, we can thank God for His providence in raising up leaders who stand for and defend what is right against what is perverse and evil.

In spite of the lack of reference to Putin’s tough approach to Islamic jihad and his defense of indigenous Christians in the Forbes article, one can readily form the impression that among power-brokers, Putin the "strongman" is preferred over anyone else on the world stage when it comes to confronting Islam.

Simply put, Putin towers over Obama and commands respect. This ranking by Forbes confirms what I have been asserting in recent articles and posts: