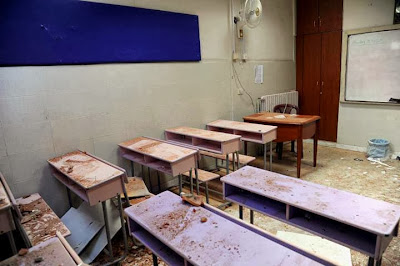 The website of the school can be found here.
The Patriarchate has published the following pictures, here:

Damascus (AFP) – Nine children were killed and 27 people wounded when mortar rounds hit a school and a  school bus in the Syrian capital Damascus on Monday, state television  reported.

“The toll in the  terrorist targeting of the St. John of Damascus school with mortar  rounds has risen to five dead, all of them children, and 27 injured,” a  news alert on Syrian state television said.

Another four students  were killed when a mortar hit the vehicle they were in, in the central  Bab Sharqi district of the capital, state news agency SANA said, adding  that the driver was also killed.

Six others inside the bus, including four more students, were wounded in the “terrorist attack,” SANA said.