The Re-Islamicization of Turkey — Deja-Vu All Over Again

Hagia Sophia Church in Trebizond Now Functioning as a Mosque


by Ralph Sidway (As published at RaymondIbrahim.com) 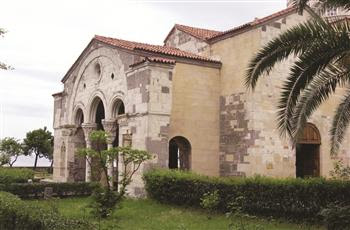 (This is an update to my posting here, and Raymond Ibrahim’s recent article.)

The relentless Muslim initiative, to roll back Turkey’s secular stance implemented by Kemal Ataturk nearly a century ago, is seen in efforts to turn former ancient Christian churches — converted to mosques during the Ottoman era, then converted into museums in the twentieth century — back into mosques.

The ancient, 13th century Church of Hagia Sophia (Holy Wisdom) in Trebizond (Trabzon) is officially on its way to becoming a full-fledged mosque, as Muslims are now empowered to cover the Christian frescoes and hold prayers there. The official announcement was made back in early February, but it was only in late June that the first Muslim prayer service was held.

Unfortunately, the Church of Hagia Sophia in Trebizond, which has been a museum for the past 52 years, now functions as a mosque.

It functioned as a mosque since the fall of Trebizond in the 15th century, and in 1961 it was converted into a museum. Recently Ecumenical Patriarch Bartholomew stated that it would be better for the church to remain a museum than to become a mosque once again.

On Friday 28 June 2013, 50 Muslims held their first prayers. The Director of the Directorate for Foundations of Trebizond, Mazchar Yildirim, said that "today launched the personal prayer of the faithful. Next week we will do a formal ceremony." He said that besides the hours of prayer (Muslims pray five times a day) the specific location will continue to operate as a museum.

The iconography and mosaics of Hagia Sophia Museum were covered during the time of prayer with carpets and curtains, without the use of nails that would cause damage, Mazchar Yildirim assured, who is the protector of the museum.

Videos of the transformation from museum (showing the Christian frescoes) to mosque, from which this report is taken, can be seen here and here.

The tiny, beleaguered Christian community in Turkey gamely tried to preserve Hagia Sophia-Trebizond as a museum through conciliatory negotiation:

“As is known, Trebizond is not urgently in need of a mosque, and it is also known that there is no Orthodox community there. The best way is to keep the church as a museum,” Dositheos Anagnostopulos, the press officer for the Ecumenical Patriarch Bartholomew told the Hürriyet Daily News back in February.

But, the issue was never about whether Trebizond needed another mosque, and consideration towards the Christians and their history was not a concern. Rather, there is an urgent Islamic push for the symbolic conversion of former churches into mosques. From the same Hurriyet Daily News story in February:

Turkish Foundations Directorate Head Adnan Ertem said five of the seven Hagia Sophias nationwide were currently functioning as mosques, but two were still inactive, adding that the culture minister was the “occupying force” in the decision to reopen Trabzon’s Hagia Sophia.

So, with the Hagia Sophia-Trebizond now functioning as a mosque, that leaves only one Hagia Sophia on Ertem’s “inactive” list. That would be the 6th century crown jewel of Eastern Christendom, the Hagia Sophia of Constantinople (Istanbul), which is ripe now to fall all over again. Turned into a museum in 1934, this Hagia Sophia is perhaps the grandest physical symbol of Byzantine Christianity. Thousands of Muslim protesters pray outside the former cathedral annually in an Islamic form of “squatters’ rights,” demanding to rededicate the great Hagia Sophia back to Islam. Yet as Raymond Ibrahim noted in his June 19, 2013 article:

The desire to turn Hagia Sophia into a mosque is not about Muslims wanting a place to pray — as of 2010, there were 3,000 active mosques in Istanbul alone. Rather, it’s about their reveling, and trying to revivify, the glory days of Islamic jihad and conquest.

And so the re-Islamicization of Turkey continues grinding along, as the dim sunset of secularism sets on the few thousand Christian remnant.  At the end of the day, it’s deja-vu all over again.