No certain information as to the condition and location of Bishops Paul and John of Syria, who were abducted on April 22 at gunpoint, their driver, a Syrian Orthodox deacon, killed in the attack. Let us keep these confessors in our prayers! 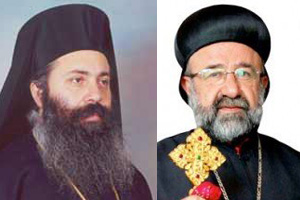 Three suspects have been detained and released in the Anatolian province of Konya after being suspected of killing Aleppo’s GreekOrthodox Bishop Boulos [Paul] Yaziji and Syriac  Orthodox Bishop Yohanna [John] Ibrahim, who were kidnapped by armed men in Syria.

However, the nephew of the one of the bishops has previously denied rumors his uncle had been killed after the circulation of an undated video showing two Christians, including a bishop, being brutally killed.


Fadi Hurigil, the head of the Antakya Orthodox Church Foundation, also said they were sure that the bishops in the video were not Yaziji or Ibrahim.

An operation was launched after information was obtained saying the suspects had illegally entered Turkey. A woman, identified as Fatim M., and two men, identified as Mohammed A. and Ahmad R, were reportedly captured by police conducting security check on a highway between Konya and Ankara. The three suspects, reportedly Russian, Syrian and Chechen citizens, were sent back to their countries after official procedures were conducted.

Bishop Boulos Yaziji and Bishop Yohanna Ibrahim were kidnapped on April 22 in Syria by armed men en route from the Turkish border.