The Crypto-Christian phenomenon during the tyranny under the Ottoman Muslims posed a difficult and challenging question for Orthodox Christians, who looked to the Holy Neo-Martyrs as examples and intercessors. Yet as we see in this account, this humble family lived quietly as "crypto-christians," yet without hesitation persevered in their trial and were faithful to the end, earning the crown of martyrdom by bravely confessing Jesus Christ.

For more on the Crypto-Christian history, see this excellent article in Road To Emmaeus.


The New Martyrs of the faith, Emmanuel, Anezina and their children George and Maria, were cryptochristians and had the following Turkish names: the father was called “Ibraim Ibni Abdullach" and his wife was “Fatme Ibni Abdullach”. The daughter was called “Hatizie” and the son “Mustafa". Also the father, Emmanuel, was 40 years old, while his wife Anezina was 38. The son, George, was 18 and the daughter, Maria, was 16.

As Muslims, they lived in the village Melissourgio of Kissamos and worked peacefully out in their fields. One day a neighbor saw them cross themselves as they sat to eat and turned them in to the Turks. They were spied on again, where they were seen doing their cross before going to bed, and taken to court, which decided for them to be beheaded, because they did not deny any of that which they were accused of. Instead they boldly said: “We were born Christians and we will die Christians.” It is worth mentioning that after they were told the court decision, they were presented before the court again and were told that if they returned to the religion of Islam they would live. Yet again they refused the offer and chose Christ.

They were sentenced to death by decapitation and their bodies were thrown outside of the fortress in Hania, to be eaten by wild animals and vultures.

The only record found about the New Martyrs from Melissourgio of Kissamos is the decision of the court, which is translated below.


The Decision of the Court

There has appeared before myself, the sacred judge of Hania, Ishmael Haki Hafiz Ali Oglou of Melissourgio, the following complaint:

Eight years ago there appeared before the sacred judge of Kissamos Ibraim Ibni Abdullach, who stated that he was a Christian "Manolis of George", and his wife Fatme Ibni Abdullach "Maria", with a wish to become Muslims along with their children, a female and a male, of their own will.

With the above decision they became Muslim in accordance with their desire according to the rule of Sacred Law, and the parents received their sacred names, and their children were named Mustafa and Hatizie, and the four lived as Muslims, being regarded by the faithful as true Muslims.

Their neighbor, Moura Aga, saw them a month ago in the village of Plakalona of Kissamos, in the afternoon as they sat to eat, and before they began they did the cross of Christians. After eating they and their children did their cross and were followed. He came immediately and told me to persuade me to follow them together with Galip, Bahrin and Hasan, and we saw them with our eyes, while they were preparing to sleep on the threshing floor, that all four did their cross.

I brought the above witnesses and the four Higianets in order to be punished as the Sacred Law dictates. There is no God but Allah!

I ordered for the three witnesses to appear with the four Higianet unbelievers shackled with 86 okas in the neck and waist, and having questioned the faithful before the accused they were asked to apologize. The parents were between the ages of 38-40 and the children between 16-18, and they replied: “We were born Christians and we will die Christians.”

I asked them if they had become Turks, and they replied that they did only in their body and not in their soul, and they did not mean to deny Christ and venerate the prophet of God Muhammad, who a few years ago before all they appeared to falsely venerate. They sinned by the phrase.

They received the decision of the Sacred Law, according to Decision No. 28 Fetfan of the glorious Moutfi Seiroullach efendi and the stetements of the three faithful as well as the witness of the accused.

I condemn the four unbelievers Manolis of George age 40, George of Manolis age 18, Anezina of Constanti age 38, and Maria of Manoli age 16, to death by beheading, which will be conducted by the brave Corps of Jannisary of Hania above on the eastern side of the fortress Pehlivan within the week in the evening, and their stinking corpses are to be thrown outside the fortress in the dung heap (Hentek). Their property will go to Beitul Mal.

The Sacred Judge of Hania

After the promulgation of the decision, and the accused having heard it, they were invited again before myself in shackles in order to repent and return to the religion of Islam, in order to save their present life and that of the future in heaven, and they replied again: “We were born Christians and we will die Christians.”

Number 67 of the enforceable judgment.

To the Most-brave Commander of Hania, Hussein Agan Tsaousin of the Corps of Jannisary 8 in Hania.

The carrying out of the above indictment took place, and the stinking corpses were eaten by crows and dogs. 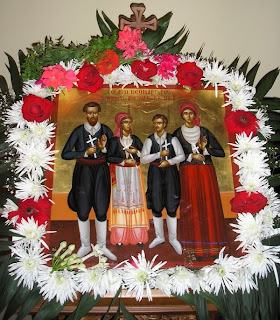 Apolytikion in the Third Tone

New Martyrs of Kissamos, you destroyed the error of Hagar, holding fast your Orthodox witness, let us joyfully praise Emmanuel, Anezina, George and Maria, and cry out to Christ Who glorified them, to grant unto us steadfast faith.