The First To Fly Was A Greek From Constantinople in 1637

"This is proof of a historical revision by nationalist Turks who want to take credit for such an impressive and historical feat achieved not by one of their own, but by a second class citizen whose land was occupied by the Turks." 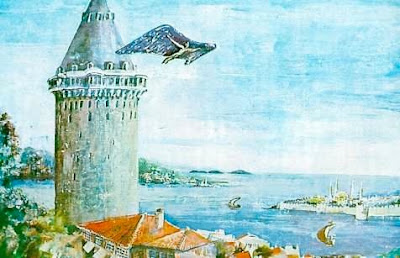 According to the latest historical study out of Bilgi Universtiy in Istanbul, a Greek from Constantinople was the first man in the world to fly over a long distance, in the 17th century.

This discovery was made by Sinan Cetin, a Turkish man who teaches History at Bilgi University. Up until now it has been believed that Hezarfen Ahmed Celebi, who is celebrated in Turkey as the first to fly, was a Turkish Muslim man. However, according to findings by Sinan Cetin, Hezarfen Ahmed Celebi was not a Turk but a Roman (Greek), whose real name was Arsenios Tselepis, son of Savvas and Elizabeth Tselepis from Tatavla (a neighborhood in Constantinople today known as Kurtulus).

This is proof of a historical revision by nationalist Turks who want to take credit for such an impressive and historical feat achieved not by one of their own, but by a second class citizen whose land was occupied by the Turks. Hezarfen Ahmed Celebi is a national hero in Turkey, with one of the three airports in Istanbul carrying the name "Hezarfen Airfield", and even a mosque next to the Istanbul Ataturk International Airport named the Hezarfen Ahmet Celebi Camii. This news, which will likely be disputed, is a tremendous blow to Turkish history, but welcome news to modern day Greeks that the truth has come to light.


It is traditionally believed in the West that the first to fly, besides the mythical Icarus and Daedulus, were the brothers Joseph Michel and Jacques Etienne Montgolfier in 1783. However, the fact is that this daring stunt took place 146 years before by Arsenios Tselepis, the brave and brilliant Romios, on 8 November 1637, which happened to be the feast of the Archangels Michael and Gabriel according to the ecclesiastical calendar of the Orthodox Church. However, some historians question this date and argue that the flight took place two days later, when reckoned according to the Ottoman calendar of the time. It is said that Tselepis was inspired by the sketches of Leonardo DaVinci, with some corrections and balancing adjustments. The name Hezarfen means "expert in a thousand sciences".

The Historical Flight of Arsenios Tselepis

We know of the flight of Arsenios Tselepis from an eye-witness account written by the traveler and historian Evliya Celebi in the 17th century ten volume work titled Seyahatnâme. He writes:

"First he practiced by flying over the pulpit of Okmeydanı eight or nine times with eagle wings, using the force of the wind. Then, as Sultan Murad Khan (Murad IV) was watching from the Sinan Pasha mansion at Sarayburnu, he flew from the very top of the Galata Tower (in contemporary Karaköy) and landed in the Doğancılar Square in Üsküdar, with the help of the south-west wind. Then Murad Khan granted him a sack of golden coins, and said: 'This is a scary man. He is capable of doing anything he wishes. It is not right to keep such people,' and thus sent him to Algeria on exile. He died there." 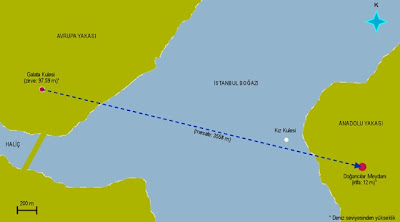 Measurements of the Launch Height and Flight Distance

Measurements of the alleged launch height and flight distance are as follows:

* The distance between the tower and the square is approximately 3.358 km (2 mi).