The Neomartyrs: the Glory of the Church 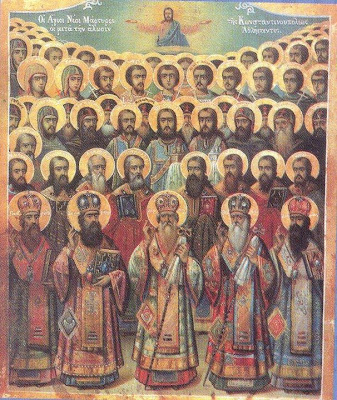 For one to speak or write today on religious matters, the majority of people would think it to be nonsense. And an even greater nonsense is the idea to write about the holy martyrs, even those who were martyred in recent years during the reign of the Turks over Christendom. This is because the short amount of time that separates them from us makes us feel they are very near us, they were people like us, whereas the ancient martyrs we see through the centuries that have past since the time they were martyred, and in our imaginations they appear more easily with the halo of a saint.

No people have spilled as much blood for the faith of Christ as ours, from the foundation of Christianity until today. And this bloody river is the purple worn by our Orthodox Church, which we must have as our greatest boast, and not to despise it or not ever speak of it. Furthermore, we should be ashamed to speak of it, in these times that we have no shame for the most shameful and loathsome sick things people do in these shameless times of ours.


We, the deceived people of today, only care about the welfare of our own bodies, and for this reason our souls have lost their sensitivity, with all the spiritual physicians we say we have. This is why we are scornful and call them fools those who seek after their material interests, though they make some sacrifices. We consider as even more nonsensical and small-minded those who sacrificed their lives for their faith, since, according to our sinful judgment, they did not look to enjoy their young years and seize this world, which is tangible and sure, but they were tortured, imprisoned, scraped, and in the end, they were slaughtered or hanged, those brainless ones, for some shady so-called eternal life and kingdom of heaven....

With these words our Church thunderously proclaims, with the martyrdoms it has undergone throughout the ages, that it is the true Church, blessed by the Lord, and not the West, which is a well-to-do and proud mistress, which has not only not spilled its blood for Christ, but the same burned people that were disobedient.

Our saints, who were martyred while we were enslaved under the Turks, were humble, simple, spoke little, and with the fire of faith in their breasts, they were guileless and uneducated, since the only thing they knew to say before the angry judge was: "I was born a Christian, and a Christian I will die!" Young people, lads in their prime years, went willingly to deliver themselves for the name of Christ, and instead of a betrothal they were slaughtered like lambs or hung with the noose around their necks. And for the unbelievers to terrorize them more, they would slowly cut their necks with the blunt of the knife, or they would separate them by hanging them with rotten rope that would easily cut in order to hang them again. And the only things the majority of them knew of our Religion were the words of Christ, who said: "Whoever confesses Me before men, I will confess before My Father who is in heaven. And whoever denies Me before men, I will also deny before My Father who is in heaven." As well as the following words spoken by our Lord: "Do not fear those who can kill the body but cannot kill the soul", and: "Whoever loses his life for my name, he will live in eternal life."

O! What height and how much spiritual decorum our race had, at a time we dare to say was illiterate and barbaric. We, of today, are the barbarians, who are not in a position to feel as we ought the nobility and the greatness of the sacrifice for the name of Christ, which they offered with their bodies, those lion-souled ones, of whom the Evangelist John says were not born of blood, nor of the will of the flesh, nor of the will of man, but were born of God. Let this generation of ours, the "sinful and adulterous", make themselves to be clever where there is no room at all to be clever, and let them mock those who gave their blood for their faith in Christ, with the hope of eternal life. The day will come when they will give a defense both in this world and in the other, and then they will understand the darkness in which they were found to be.