(Commemorated July 10) Hieromartyr Joseph was slain by the Muslim Turks during the Damascus Massacre of 1860 (for background see here, here, and here). The trials of the Christians in Syria in the mid-19th century were not dissimilar from those of today's Christians. We can also see the continuity of brutal Islamic treatment of Christians in such historical accounts of the neo-martyrs.

The sections recounting St. Joseph's character and his martyrdom are posted below, but his full life is very edifying, and may be found at MYSTAGOGY blog. 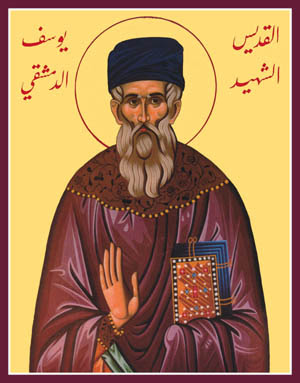 
CHARACTERISTICS OF A MAN OF GOD

One of the main characteristics of this archpriest and teacher was his poverty. Some sources mention that his ministry to the Church was without payment. One of the Russian scholars said that he had no income from teaching in school; he used to earn his living from the labor of his children. Money never tempted him.

Because of his intact reputation, Cyril II, Patriarch of Jerusalem (1845-1872), asked him to teach Arabic at the clerical school in Jerusalem (Al-Mousalabah). When he declined, the Patriarch offered him a tempting salary - twenty-five pounds - in addition to an apartment, and priestly wages. He declined in spite of his need. He said that "I was called to serve the parish in Damascus; He who called me will satisfy me."

He was a true worshiper, fervent in his faith, exceedingly patient, righteous, meek, quiet, humble, compassionate, and a friendly person; he hated to talk about himself, he felt embarrassed by the praise of others, not knowing how to answer them. He was wise and patient in his pastoral care; he used to confute the scholars by speaking their language and to convince the simple people by using their language. When a few simple-minded people left the Church for an insignificant reason, Patriarch Methodios asked him to bring them back. After he met them he did not manifest any resentment from their behavior, but he treated them with kindness, showing them some small icons; they came back repentant after he had touched their hearts.

As a scholar, he was the professor among the teachers, the star of the East, and the working intellectual. Many unorthodox contemporary people testify that he was one of the great Christian scholars of his epoch. "In the Orthodox Church, he was a very distinctive person in his knowledge; there was no one like him, except George Lian."

As a churchman, he was considered a great theologian, a pride of Orthodoxy, a hieromartyr, and an example in righteousness and godliness. Those are the characteristics of Archpriest Joseph the Damascene: He is one of God's people...

On July 9, 1860, when the massacre in Damascus started, many Christians took refuge in the Patriarchal Cathedral (Al-Mariamieh); some came from the Lebanese cities of Hasbaia and Rashaia, where the massacre started and where killing took place. Others came from the villages around Damascus.

Following the tradition of the priests in Damascus, Father Joseph used to keep the Communion kit at his house. During the massacre of 1860 he hid his communion kit under his sleeves, and went jumping from one roof to another toward the Cathedral. He spent the whole night strengthening and encouraging the Christians to face the situation, for the attackers can kill the body but cannot kill the soul (Matthew 10:28); the crowns of glory have been prepared for those who committed themselves to God through Jesus Christ. In relating to them the martyrdom of some saints, he called them to emulate their life.

On Tuesday morning, July 10, the persecutors belligerently attacked the Cathedral, robbing, killing and burning everything. Many martyrs were slaughtered, others went out on the streets and alleys; one of them was Father Joseph. As he walked on the streets, a religious scholar, who was one of the attackers, recognized Joseph, because the latter had confuted him in a debate between them. Seeing him he shouted: "This is the leader of Christians. If we kill him, we will kill all the Christians!" When he heard these words, Father Joseph knew that his end had come. He took out his communion kit, and partook of the Body and Blood of Jesus Christ. The persecutors attacked him with their hatchets, as if they were woodcutters, and disfigured his body. Binding his legs with ropes, they dragged him over the streets until he was dashed into pieces.

Although he died as a martyr, his life, his vigilance, and his sufferings were a witness of his holiness. By "becoming like Him in His death" (Phil. 3:10), he was crowned with His glory. He became an example to be emulated, and a blessing to be acquired, and an intercessor to our Lord and Savior Jesus Christ, to Whom be the glory forever. Amen.

Through the prayers of HIEROMARTYR JOHN THE DAMASCENE and his companions, Lord Jesus Christ our God, have mercy on us and save us. Amen.
Posted by Zosimas at 4:00 PM