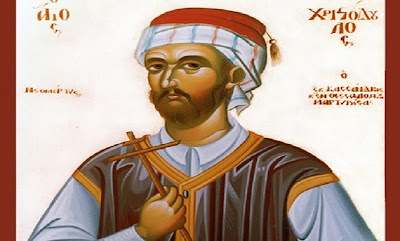 The new martyr and servant of Christ Christodoulos was from Kassandra, the first leg of Halkidiki, from a village called Valta. When he was still young, he left his home and went to Thessaloniki and, when he’d learned how to make thick woolen cloth and capes, he plied his tried there and went on business to the surrounding area before returning to the city where he lived. On one occasion, however, he went to the island of Chios with his master, where he bought a plain cross. When he returned to Thessaloniki he paid to have it painted, since it was large enough to do so. When he’d done this, he took it to the church of Saint Athanasios and left it there, since he was friends with the verger.


It happened that, at that time, a certain Bulgarian converted to Islam and when Christodoulos saw him he was very much saddened over the loss of the man’s soul. So he decided he’d die a martyr’s death. On 26 July, then, without telling anyone what he was doing, he sat down and wrote out all the sins he’d committed from his youth up, picked up his cross and went to his confessor. He gave the cross to his confessor, read out the paper himself and confessed his sins and then, after confession, went to his friend, the verger of Saint Athansios’.


The next day, the feast of Saint Panteleimon, the martyr said to his friend the verger that he’d forgotten some sins, and so he went back to his confessor and then returned to the verger, with whom he stayed the night. In the morning, when it was time for Mattins, the martyr got up earlier than the verger, opened up the church and lit the icon lights, remaining there until both Mattins and the Liturgy had finished. After the liturgy, he said to the verger: “Go and fetch my cross”. The latter asked: “What do you want it for?”. “I want to take it to the painter, to make another one just like it so I can give it to somebody”.

The man went and fetched it and, once he’d got it, the martyr went down to the Turkish inn where the ceremony was to take place and sat sewing, inconspicuously. When he heard them sounding the drum for the circumcision of the wretched Christian who had apostatized, Christodoulos abandoned his work, put aside his tools and the cloth covering his head, left his bag and, with his cross in his hand, boldly went out into the street, directly to the coffee shop where a great many Muslims had gathered. He went in to the coffee shop with great courage, holding the cross in his hands and said to the wretched man who’d denied Christ: “Brother, what’s the matter with you? This is our faith, this is Christ Who was crucified out of love for us, so why are you leaving Christ the Saviour to become a Turk?

But the abject man paid no attention to what he was saying. Then the martyr went up close to him and gave him the cross to kiss, saying: “Kiss the cross of our Lord, brother”. But the apostate wouldn’t. When the janissaries saw this, they threw Christodoulos out. He said to them: “My business isn’t with you, but with my brother, who wants to deny his faith”. He didn’t back down or leave, but went back to the denier of Christ and urged him not to become a Turk. Then the janissaries surged towards him, beat him with their fists and stabbed him behind the neck and on his head, so that his blood flowed freely. Then they tied him up and frog-marched him off to the Aga of the janissaries, with his cross still in his hand. As he was being taken there, a senior church official passed by and, as far as he could, he made a deep bow, to show the respect due to the clergy from the laity.

So they took the martyr to the Aga of the janissaries and from there to the mullah, that is the judge, who asked him: “Who sent you to do this thing?”. Christodoulos replied: “No person sent me, but Christ Himself”. The judge said to him: “Forget all that and become a Muslim”, but the martyr replied: “You forget Islam and become a Christian”. At that, the judge ordered him to be flogged, but not that he be put to death. The janissaries, however, rose up as a man and demanded that the death penalty be applied, otherwise they’d burn down the court with him inside it.

So the judge took fright and handed the martyr over to them to take him to another official, in charge of conversions. This official asked him about the man who’d dared to convert to Islam. The martyr repeated the words he’s used to the judge. So they threw him down onto the floor and beat his legs two hundred and four times, so that the ground was running red with blood. Then they dragged him off to hang him and, on the way,  he cried out to any Christians he saw, saying: “Forgive me, and God will forgive you”. They took him to the church of Saint Minas, and there, in front of the door, they hanged him. In this way, he gained the crown of martyrdom.

They stripped him and put his cross round onto his back, and he remained thus for two days. So the man who had striven for Christ bore a cross on his back, in the same way as his Lord had on His way to Golgotha. After that the Christians paid six hundred piastres to claim his relics, which they buried with honours. Any of those who were present were blessed with the rope and his shirt. The same happened to people who were sick: they were censed or signed with these and became well, to the glory of God, Who glorifies those who glorify Him in return. Through Whose mercy and the intercessions of the Martyr, may we, too, be found worthy of the Kingdom of Heaven.