Why Western Nations Should Only Accept Christian Refugees

Raymond Ibrahim makes a compelling case as to why Western nations should only accept Christian refugees, keying on four main reasons:


Why Western Nations Should Only Accept Christian Refugees
by Raymond Ibrahim — September 16, 2015 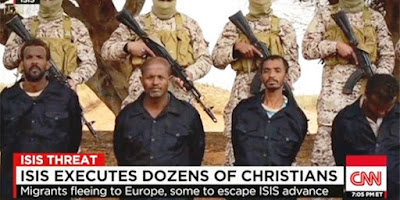 As refugees from the Middle East flood the West, a number of countries—including Hungary, Bulgaria, Poland, Czech Republic, Slovakia, Cyprus, and Australia—are defying political correctness by wanting to accept Christian refugees only.

While more “progressive” voices cry “racism,” the fact remains: there are several objective reasons why the West should give priority, if not exclusivity, to Christian refugees—and some of these are actually to the benefit of European host nations.

Christians are true victims of persecution.

From a humanitarian point of view—and humanitarianism is the chief reason being cited in accepting refugees—Christians should receive top priority simply because they are the most persecuted group in the Middle East—well before the Islamic State phenomenon came into being.  As Australian Foreign Minister Julie Bishop put it, “I think that Christian minorities are being persecuted in Syria and even if the conflict were over they would still be persecuted.”

Indeed.  While they are especially targeted by the Islamic State, before the new “caliphate” was established, Christians were and continue to be targeted by Muslims—Muslim mobs, Muslim individuals, Muslim regimes, and Muslim terrorists, from Muslim countries of all races (Arab, African, Asian, etc.)—and for the same reason: Christians are infidel number one.  See Crucified Again: Exposing Islam’s New War on Christians for hundreds of anecdotes before the rise of ISIS as well as the Muslim doctrines that create such hate and contempt for Christians.

Conversely, Muslim refugees—as opposed to the many ISIS and other jihadi infiltrators posing as “refugees”—are not fleeing direct persecution, but chaos created by the violent and supremacist teachings of their own religion, Islam.  It’s not for nothing that Samuel Huntington famously pointed out that “Islam’s borders are bloody, and so are its innards.”  This means that when Muslims enter Western nations, chaos, persecution, and mayhem follow.  Take a look at those West European cities—for example, Londonistan—that already have a large Muslim population for an idea.

Muslim persecution of Christians has been further enabled by Western policies, especially those of the Obama administration.

In other words, Western nations should accept Christian refugees on the basis that Western meddling in the Middle East is directly responsible for exacerbating the plight of Christian minorities.  After all, Christians did not flee from Bashar Assad’s Syria, or Saddam Hussein’s Iraq, or Muamar Gaddafi’s Libya.  Their systematic persecution began in earnest after the U.S. and others interfered in those nations in the name of “democracy.”  All they did is unleash the jihadi forces that the dictators had long kept suppressed. Now the Islamic State is deeply embedded in all three nations, enslaving, raping, and slaughtering countless Christian “infidels” and other minorities.

Vladimir Putin’s thoughts on the refugee crisis are plainly true:

This is a crisis which was absolutely expected….  We in Russia and your humble servant said several years ago that there would be massive problems if our so-called western partners conduct what I have always called the “wrong” foreign policy, especially in regions of the Muslim World, the Middle East and north Africa, which they continue practically to this day.

The Russian leader correctly adds that “people are running away not from the regime of Bashar Assad, but from Islamic State, which seized large areas in Syria and Iraq, and are committing atrocities there. That is what they are escaping from.”

Thus if the West is responsible for unleashing the full-blown jihad on Christians, surely it is the latter that the West should prioritize, from a humanitarian point of view.

Unlike Muslims, or even Yazidis, Christians are easily assimilated in Western countries, due to the shared Christian heritage.

As Slovakia, which prefers Christian refugees, correctly points out, Muslims would not fit in, including because there are no mosques in the Slavic nation. Conversely, “Slovakia as a Christian country can really help Christians from Syria to find a new home in Slovakia,” said an interior minister.

This too is common sense.  The same Christian teachings that molded Europe over the centuries are the same ones that mold Middle Eastern Christians—whether Orthodox, Catholic, or Protestant.   As San Diego’s Father Noel said in the context of the Iraqi Christian refugees who managed to flee ISIS but are now rotting in a U.S. detention center, Mideast Christians “who come here [America] ‘want to be good citizens’ and many who came here a decade ago are now lawyers, teachers, or other productive members of society.”

Meanwhile, Muslims follow a completely different blueprint, the Koran—which condemns Christians by name, calls for constant war (jihad) against all non-Muslims, and advocates any number of distinctly anti-Western practices.   Hence it is no surprise that many Muslim asylum seekers are anti-Western at heart, if not members of jihadi organizations.

Mideast Christians bring trustworthy language and cultural skills that are beneficial to the West.

They understand the Middle Eastern—including Islamic—mindset and can help the West understand it.

Moreover, unlike Muslims, Christians have no “conflicting loyalty” issues: Islamic law forbids Muslims from aiding “infidels” against fellow Muslims (click here to see some of the treachery this leads to in the U.S. and here to see the treachery Christians have suffered from their longtime Muslim neighbors and “friends”).  Indeed, an entire book about how “double agent” Muslims have infiltrated every corner of the U.S. government exists.  No such threat exists among Mideast Christians.  They too render unto God what is God’s and unto Caesar what is Caesar’s.

Finally, it goes without saying that Mideast Christians have no sympathy for the very people and ideology that made their lives a living hell—the very people and ideology that are also hostile to everything in the West.  Thus a win-win: the West and Mideast Christians complement each other, if only in that they share the same foe.

All the above reasons—from those that offer humanitarian relief to the true victims of persecution, to those that offer benefits to the West—are unassailable in their logic and wisdom.  Yet, because Western progressives prioritize politically correct ideals and fantasies over stark reality, there is little chance that they will be considered.

Quite the reverse: in America and Britain persecuted Christians are “at the bottom of the heap” of refugees to be granted asylum. Muslims receive top priority.  Since January 2015, the U.S. has granted asylum to approximately six Muslims for every Christian it takes in.

The reason for this is simple: for the progressive mindset—which dominates Western governments, media, and academia—taking in refugees has little to do with altruism and everything to do egoism: It matters little who is really being persecuted—as seen, the West is directly responsible for greatly exacerbating the sufferings of Christians.

No, what’s important is that we “feel good” about ourselves.  By taking in “foreign” Muslims, as opposed to “siding” with “familiar” Christians, progressives get to feel “enlightened,” “open-minded,” “tolerant,” and “multicultural”—and that’s all that matters here.

Meanwhile, reality quietly marches on: The same Islamic mentality that slaughters “infidel” Christians in the Middle East is now welcomed into the West with open arms.