"Since October 2014, 906 Muslim refugees from Syria were granted U.S. visas, while only 28 of Syria’s estimated 700,000 Christian refugees were provided with visas." 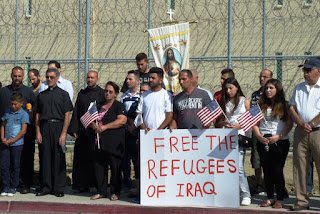 Two archbishops from the Middle East have complained that the United States unfairly discriminates against Christians from their region when they apply for U.S. visas.

Chaldean Archbishop Bashar Warda of Erbil, Iraq, and Melkite Archbishop Jean-Clément Jeanbart of Aleppo, Syria, aired their grievances at an August 4 press conference at the 2015 Knights of Columbus Convention in Philadelphia.

The archbishops cited federal data indicating that, since October 2014, 906 Muslim refugees from Syria were granted U.S. visas, while only 28 of Syria’s estimated 700,000 Christian refugees were provided with visas. They said that even considering that Christians account for just 10 percent of the population of Syria, the number of visas granted to Christians seems widely disproportional.

Although the U.S. government does not track the religious affiliation of immigrants, Christianity Today nevertheless reported that the bishops gathered their information “from official U.S. government sources.”

Our people are asking these questions: how come we apply for the American visa and are denied?

This is a clear case of persecution.

They’re being denied visas while others who have participated (in the violence) or at least were silent can go [to America].

The Catholic News Agency reported that Archbishops Warda and Jeanbart would like to see their flocks stay and help rebuild the Christian populations in the Middle East, where Christians have lived since the first decades after Jesus' death. However, they realize they cannot ask people to remain in places where they are endangered by the terrorism and violence.

“We would like our people to stay, we would like [that], but emigration is a personal decision; we cannot encourage [it], but we cannot stop it,” Warda said.

Iraq alone has seen a massive emigration of Christians. The Christian population has plummeted to 300,000, down from about 1.5 million before the 2003 U.S.-led invasion of the country.

The report reinforces what former Representative Ron Paul noted recently: “The reason so many are fleeing places like Syria, Libya, Afghanistan, and Iraq is that US and European interventionist foreign policy has left these countries destabilized with no hopes of economic recovery.”


If the turmoil in Iraq and Syria aggravated by our interventionism were not so bad, the question of whom to grant or not grant immigration visas to would be a moot point.  These Middle Eastern people of both Christian and Muslim beliefs would most likely prefer to remain in their homelands.