Timed to coincide with the Russian President's address at the United Nations General Assembly on Monday, September 28, 2015, this in-depth interview is fascinating to watch, and may prove to be a masterful reset of Mr. Putin's image in America and the West. Kudos to Charlie Rose for some challenging, provocative questions, to which Mr. Putin gave some very thoughtful and revealing answers. 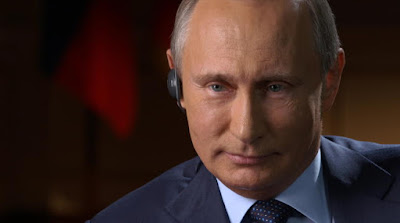 At a time of icy relations with the U.S., Russian President Vladimir Putin gives a rare -- and surprising -- interview to 60 Minutes

The following is a script from "Putin" which aired on September 27, 2015. Charlie Rose is the correspondent. Andy Court, producer.

There aren't many world leaders who have generated as much interest as Russia's Vladimir Putin. All eyes will be on Putin when he speaks at the U.N. tomorrow and meets with President Obama, at a time when he has placed himself and his country in the middle of the most pressing issues of our times. He helped the U.S. and its Western allies broker the nuclear deal with Iran, and now, with a Russian buildup of aircraft, military equipment and personnel in Syria, he has put himself and his country at the center of that civil war and the fight against ISIS.

Now, when his relations with the United States seem to be at a post-Cold War low, suffering under Western economic sanctions imposed on Russia, Putin may be looking for a way to restore his international influence and gain the respect he seeks for his homeland.

Just before his trip to the U.S., Putin invited us to meet him at his state residence outside Moscow where we found him characteristically confident and combative as he made the case that the focus in Syria should be on fighting ISIS rather than removing Syrian President Assad.

Charlie Rose: So you would like to join the United States in the fight against ISIS? That's part of why you're there. Others think that while that may be part of your goal, you're trying to save the Assad administration because they've been losing ground and the war has not been going well for them. And you're there to rescue them.

President Putin: Well, you're right. We support the legitimate government of Syria. And it's my deep belief that any actions to the contrary in order to destroy the legitimate government will create a situation which you can witness now in the other countries of the region or in other regions, for instance in Libya where all the state institutions are disintegrated. We see a similar situation in Iraq. And there is no other solution to the Syrian crisis than strengthening the effective government structures and rendering them help in fighting terrorism. But, at the same time, urging them to engage in positive dialogue with the rational opposition and conduct reform.

Charlie Rose: As you know some of the coalition partners want to see President Assad go first before they will support.

President Putin: I'd like to recommend to them the following. They should send this message to the Syrian people. It's only the Syrian people who are entitled to decide who should govern their country and how.

Charlie Rose: President Assad, you support him. Do you support what he is doing in Syria and what is happening to those Syrian people, those many millions of refugees and the hundreds of thousands of people that have been killed, many by his own force?

President Putin: Well, tell me, what do you think about those who support the opposition and mainly the terrorist organizations only in order to oust Assad without thinking about what will happen to the country after all the government institutions have been demolished? Today, you have repeatedly said that Assad is fighting against his own population. But look at those who are in control of 60 percent of the territory in Syria. It's controlled by either ISIS or by others--

Charlie Rose: Are you prepared to put Russian combat troops on the ground in Syria if it's necessary to defeat ISIS?

President Putin: Russia will not participate in any troop operations in the territory of Syria or in any other states. Well, at least we don't plan on it right now. But we are considering intensifying our work with both President Assad and with our partners in other countries.

Charlie Rose: I come back to the problem that many people look at. And they believe that Assad helps ISIS. That his reprehensible conduct against the Syrian people using barrel bombs and worse is a recruiting tool for ISIS and that if he was removed, transitioned, at some point, it would be better in the fight against ISIS, al-Nusra and others.

President Putin: Well, speaking in a professional language of intelligence services I can tell you that this kind of assessment is an "active measure" by enemies of Assad. It is anti-Syrian propaganda.

Charlie Rose: Much is being read into this including this, that this is a new effort for Russia to take a leadership role in the Middle East and that it represents a new strategy by you. Is it?

President Putin: Not really. No. More than 2,000 fighters [i.e. Muslim jihadis] from Russia and Ex-Soviet Republics are in the territory of Syria. There is a threat of their return to us. So instead of waiting for their return, we are better off helping Assad fight them on Syrian territory. So this is the most important thing which encourages us and pushes us to provide assistance to Assad. And, in general, we want the situation in the region to stabilize...