'Perfected by the Sword' - The Way of Martyrdom in Our Times: Metropolitan Hierotheos of Nafpaktos


"The Church today must prepare her children and those who love Christ and His salvation for martyrdom, to become martyrs for Christ. Theology, missions and social work outside of the feel and view of martyrdom has no particular value. The great Elders during the time of the Turkish occupation were “coaches” of the martyrs. This is what the great Elders are doing also today."

"The way of the Church is the way of sacrifice and martyrdom – this has been so since the foundation of the Church and it remains true for us today... We cannot begin to speak about how to expand the mission, if we do not begin with the reality of martyrdom, which is the only authentic foundation for our Apostolic work... We are here, in North America, called to be apostles and martyrs for Christ."

— Metropolitan Tikhon of the OCA, (Source)


Holiness and Martyrdom in Our Times:
An Interview with Metropolitan Hierotheos of Nafpaktos 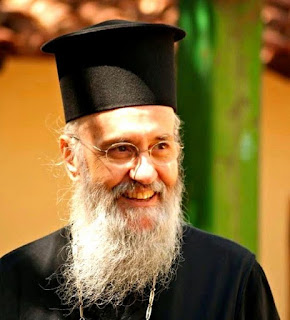 Holiness, asceticism, discernment and martyrdom are great riches of our Church that move us, attract us, transform us and save us from the distractions and lies of this world in every era. In an interview with His Eminence Metropolitan Hierotheos of Nafpaktos and Agiou Vlasiou, he gives answers to the questions of a journalist (George Theoharis from /Agioritikovima.gr/) on these issues, and speaks of other aspects of ecclesiastical life...

– In many parts of the world today we see that Orthodoxy is persecuted. Where do you think our enemies will reach?

– You are absolutely right. Wherever an Orthodox Church exists it accepts temptations and persecutions. It is an undeviating law. We see this wherever an Orthodox Church exists – North, South, East and West. The only thing different is the method of persecution in each country. Sometimes it is obvious and aggressive and reminiscent of the ancient times of early Christianity, and sometimes it is insidious and more dangerous, such as secularization, that is, the intermingling with the world.

The Orthodox Church is the Body of Christ, it is the brilliant sun that causes and invites pain to those whose eyes are unhealthy and have vision problems. And where the sun is there is also a shadow, and in the shadow is darkness, where many bloodthirsty beasts circulate.

When people hate Christ, the Truth, the Orthodox Church, they have internal problems and can reach unfathomable places, to the point of madness. I saw on the internet a frightening scene of the beheading of a Christian by a fanatical Muslim and I was shocked. I thought how this was the way the Apostles and Martyrs were martyred, such as when the Synaxarion says “they were perfected by the sword”.

And this is a test for us who love to have a good time, who compromise, who seek prosperity. Hence, persecutions show the internal illnesses of the persecutors, as well as the greatness of Christians. The measure of our love for Christ is very high. Holiness and faithfulness to the evangelical commandments are not given with the low criteria of ethical and social works, but they must have high standards.

Eventually, the Church today must prepare her children and those who love Christ and His salvation for martyrdom, to become martyrs for Christ. Theology, missions and social work outside of the feel and view of martyrdom has no particular value. The great Elders during the time of the Turkish occupation were “coaches” of the martyrs. This is what the great Elders are doing also today.

I was moved recently when I received a message from a Christian in Egypt that said:

“Please pray to God to give us strength, peace and rest, so we can bear our cross with courage and firm faith, and be considered worthy to become saints and martyrs for the name of Christ.”

How can you not love such a disposition for martyrdom!

– In Syria the situation is unsettled. They threaten Christians there with massacres if they do not leave their homes. Where are we going with all this? Perhaps these war conflicts are generalized?*

– I follow with deep sorrow all that is taking place in Syria. I cannot say that I am on a particular side, because then I would be participating in the killing, and this is susceptible to divine justice. However, I deeply sorrow for this crazy river of blood, for the loss of human beings. We must create an army to pray that this crazy bloodbath will end and that peace will come to the region.

I sorrow for a particular reason, because I know these parts, since I repeatedly visited throughout the three-year period of 1988-1991, as well as many times after. In 1988, at the suggestion of Archbishop Seraphim of Athens and All Greece and the decision of the Holy Synod of the Church of Greece, I went to Lebanon to teach at the Balamand Theological School “Saint John of Damascus”. I had an official passport from the Ministry of Foreign Affairs to have greater security. Because the airport in Beirut was not in operation, due to the civil war, I would go to Damascus in Syria and from there the Patriarchate of Antioch led me to Lebanon.

So for many days I would stay in Damascus, where I spoke with Orthodox young people, scientists and students who had a great thirst for God. I visited many of them and liturgized and spoke with the people, such as in Homs, Aleppo, Lattakia, etc. In Syria I came to know ardent Orthodox Christians, good monks and exceptional Clergy. There I gained dear friends and I grieve that I see daily the unrest in the region. I know Bishops and Professors who were students of mine at the Theological School in Lebanon, and I pray for them to God. Of course, I know Patriarch Ignatios of Antioch, with whom I spoke many times. He has excellent skills and is trying to preserve and protect the Church, but temptation is great.

However, we live in an era in which we should not only look after ourselves and our homes, but we should be concerned with the problems of our other brethren and Orthodox Christians, and we must pray for them.

Of course, God directs history, and we are under His Providence, and He intervenes in the proper time, but our prayers are needed. Hence, every Divine Liturgy is a prayer for the peace of the world, the stability of the Churches of God, the cessation of wars.

Let us make this a request for prayer. Let our hearts hurt, because unfortunately the world’s problems are geopolitical, since all people are considered small pawns in the international chessboard, instituted by some “global players”, without pity and pain. Let God be propitious to us all.