Obama triples down on his politically correct Mideast fantasies, while Putin correctly analyzes ISIS and Assad. 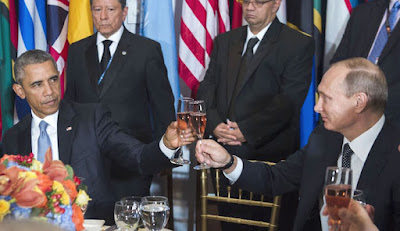 Barack Obama and Vladimir Putin both spoke at the United Nations on Monday, with Putin reiterating a call he made in September for an international coalition against jihad terror and the Islamic State in particular. Obama again rebuffed that call, although this time he left the door slightly open to some kind of cooperation with Russia.

The sticking point is Bashar Assad — and the differences that Obama and Putin have over Assad’s regime demonstrate yet again that when it comes to the jihad threat, Putin is assessing the situation realistically while Obama is operating in the realm of politically correct fantasy.

Putin skewered those fantasies in his UN speech Monday when he noted the failure of the Arab Spring to do what Barack Obama and the entire political and media elites insisted it would do: bring to the Middle East a flowering of democracy and freedom:

Instead of the triumph of democracy and progress, we got violence, poverty and social disaster — and nobody cares a bit about human rights, including the right to life. I cannot help asking those who have forced that situation: Do you realize what you have done?

No, they don’t realize what they have done, and they’re poised to do more of it.

No matter how often the establishment analysts get things wrong, and disastrously, fatally so, they never get called to account, and they keep applying the same failed solutions over and over again.

The disagreement between Obama and Putin is a case in point. The Americans and French and the others in the Western coalition are merely carrying out cosmetic strikes against the Islamic State — strikes that even the mainstream media has begun to acknowledge are more for appearance’s sake than for making any real dent into the Islamic State’s holdings. Meanwhile, Russia is now acting with Iran and its client regimes in Baghdad and Damascus to do something genuine to fight the Islamic State.

Obama won’t join in or aid this effort because of Assad. The New York Times on Sunday summarized his disagreement with Putin on this:

American officials, who have long cast Mr. Assad as the primary source of instability in Syria, assert that the Syrian leader’s brutal crackdown provided an opening for jihadist groups and that the crisis cannot be resolved until a political transition is negotiated that requires him to leave power. But Russian officials see the Syrian government as a bulwark against further gains by groups like Islamic State and Nusra Front and sometimes suggest that the defeat of the Islamic State should come before a negotiated solution for the Syrian conflict.

The U.S. position assumes that the Islamic State’s power and appeal is based on outrage at the crimes of Assad, and that therefore its support would melt away if Assad were gone.

No one who has ever read anything that the Islamic State has published or any of the accounts of why people join it could hold this position.

Of course, the Obama administration and the other governments of the West are committed as a matter of policy to ignoring and denying the ideological and religious appeal of the Islamic State. Since they maintain that the Islamic State is not Islamic, they have to find some other reason for its appeal to young Muslims worldwide. That reason is supposedly Assad’s atrocities.

The U.S. position is based on fantasy. The Russian one is based on reality. The Iranian involvement is unfortunate, but now that Obama has concluded his disastrous nuclear deal with the mullahs, it can hardly be said that the U.S. has a better handle on the Iranian situation, either.

Obama doubled down on this fantasy Monday at the UN when he called on Muslims to reject “those who distort Islam to preach intolerance and promote violence.”

When he is going to call upon mosques and Muslim organizations in the U.S. to back up their condemnations of the Islamic State with genuine programs teaching against its understanding of jihad and Islam?

In the same speech, Obama called for the removal of Assad, which, if it happens, will only strengthen and embolden the Islamic State. Putin knows that. Obama doesn’t, or refuses to face the fact, or perhaps even welcomes it.

“Clueless,” “in denial,” or “complicit” are unfortunate terms to apply to any U.S. president, but there was no doubt at the United Nations on Monday: as he did several years when Obama was claiming thet Assad had used chemical weapons against his own people, Vladimir Putin has outfoxed Barack Obama again.
_______

Robert Spencer is the director of Jihad Watch and author of the New York Times bestsellers The Politically Incorrect Guide to Islam (and the Crusades) and The Truth About Muhammad. His new book, The Complete Infidel’s Guide to ISIS, is available now.