The law known as Bill 59 would allow Quebec's Human Rights Commission or members of the public "to initiate a 'hate speech' lawsuit against a person who makes a statement considered discriminatory against a group..."

In addition, the bill would grant the commission power to investigate people alleged to have uttered hate speech. Those convicted of promoting hate could be fined up to $20,000 and their names would be made public and posted indefinitely to a list available online.

As Robert Spencer wrote in his commentary on this openly fascist law designed to silence free speech and specifically any criticism of Islam:

"Come and get me, coppers."

But the purpose of this blog is not merely criticism of Islam for its own sake, because Islam is patently false. Nor is it to defend freedom of speech and the American way of life per se.

Rather, the purpose of this blog is to present the Christian response to Islam, which is best described as "Love Speech." We hold out to Muslims the Word of God, Jesus Christ, who came to free us from sin, death and the devil. "There is no other name given in heaven or on earth by which we may be saved" (Acts 4:12).

So, dear Muslim readers, if your conscience is nagging you and you are weary of your co-religionists hacking the heads off non-Muslims, and all their killing and raping in obedience to Allah and the Koran and following the example of Muhammad, leave all that behind and turn to Jesus Christ and eternal life as lived and preached in the Orthodox Church.

This is not hate speech, it is the most loving invitation in the world. We're waiting for you with open arms. 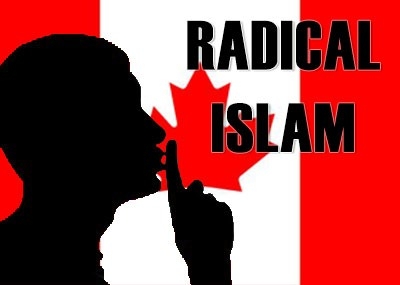 Thirteen years, thirteen honor killings, all in Muslim families, all of them in Canada. But if you should condemn those murders, you might find yourself the subject of investigation and convicted of a crime.

If adopted, the law known as Bill 59 would allow Quebec's Human Rights Commission or members of the public "to initiate a 'hate speech' lawsuit against a person who makes a statement considered discriminatory against a group," Marc Lebuis, director of Point de Bascule, an organization that tracks Islamist activities in Canada, said in a recent interview.

In addition, the bill would grant the commission power to investigate people alleged to have uttered hate speech, said Justice Minister Stephanie Vallée. Those convicted of promoting hate could be fined up to $20,000 and their names would be made public and posted indefinitely to a list available online.

Most view Bill 59 as a response to pressure from Muslim groups, who have filed several complaints of "Islamophobia" and anti-Muslim hate speech in recent years. In many ways, the bill resembles UN Resolution 16/18, an initiative of the 56 Islamic States who comprise the Organization of Islamic Cooperation and which restricts speech that could be considered "discriminatory" or which defames religion and can be considered "incitement to violence." Only Bill 59 is worse: it pertains to personal, subjective, emotional responses that an individual has to something that he reads, hears, or encounters.

That this proposed statute flies in the face of everything we in the United States as well as in Canada believe to be fundamental to human and civil rights and the sanctity of free speech is not the only challenge the proposed bill presents. But it presents its greatest threat to democracy and the values the West holds sacred.

Ironically, Lebuis says, supporters justify the bill by suggesting it will protect democracy against terrorism. They reason that "terrorism is a reaction towards people who criticize their religion," he explains, "so by banning the criticism of Islam, we would end terrorism." Such arguments have been made both by Quebec Premier Philippe Couillard and by Muslim groups such as the Association of Muslims and Arabs for a Secular Quebec (AMAL). "Hate and Islamophobia drive certain people in groups subject to discrimination toward another form of extremism and violence," said AMAL President Haroun Bouazzi in a recent presentation to the National Assembly during a debate over the bill.

But Canada's federal criminal code already calls for imprisonment (up to two years) for "anyone who incites hatred against any identifiable group," as the Montreal Gazette points out. Though the proposed bill addresses hate speech against individuals, not groups, it fails even to define what "hate speech" is. As attorney Julius Grey testified, "Nietzsche, Shakespeare and Voltaire could all be found to have incited violence and hatred. Should they have been censored?"

Moreover, because there is no clear definition of "hate speech" and no standard by which it can be measured, the bill leaves the door wide open for prosecution. "It is based on what people feel or could feel," Lebuis said. "Public interest, the truth, facts or even intentions are no defense."

That situation is made worse by the fact that conviction is based on the determination of the Human Rights Commission tribunal, overriding federal laws which require a determination of guilt "beyond reasonable doubt." As columnist Don MacPherson observes in the Montreal Gazette:

"The federal Criminal Code defines 'hate propaganda' as advocating or promoting genocide, inciting hatred against an identifiable group [that is] likely to lead to a breach of the peace,' or 'willfully' promoting hatred against such a group ... And an accused can't be convicted 'if the statements were relevant to any subject of public interest, the discussion of which was for the public benefit, and if on reasonable grounds he believed them to be true" (as would be the case, say, with any condemnation of an honor killing).


But Bill 59 makes no such provisions.

Others, including (surprisingly) AMAL's Bouazzi, have objected to the proposed creation of a permanent, public record of those found guilty of "hate speech" – a gesture that is not only defamatory but could even become dangerous should anyone seek retribution. Further, "hate speech" is not defined in the bill, so such a conviction has Machiavellian potential: For example, were you, to ascribe honor violence or terrorism to cultural or religious beliefs, you could be subject to prosecution. This would be the case even if the actual perpetrator claimed to act in the name of culture or religion. And while a terrorist will go to prison for his deeds, should you be found guilty of violating Bill 59, your name, not his, will be indelibly included on that list visible to the world.

As such, the potential for political parties to silence – let alone criminalize – those who oppose them lurks ominously within the reaches of such a law.

Among Muslims, according to Pakistani-Canadian activist Tarek Fatah, opinions seem to be split. "Ironically, some Islamist-promoting organizations and mosques have welcomed Bill 59, notwithstanding the fact they violate it every week when they start their Friday prayers with a ritual invocation that asks, 'Allah to give Muslims victory over the "kufaar"(Christians, Jews and Hindus),'" he writes in the Toronto Sun. Others like himself, he says, "everything we can to make sure Quebec's Bill 59 does not pass." And if it does pass, he adds, "the first complaint to the QHRC will be against Islamist mosques for spreading hatred against Jews and Christians.

"That is a promise."

Judging from past efforts to legislate such issues in Canada and from the apparent opposition to Bill 59 being voiced in editorials around the country, the measure seems to have little chance of passing. A measure to legalize sharia tribunals, for instance, failed in 2005, though ironically, these tribunals – opposed vehemently by Muslim women, who recognized that such tribunals tend to discriminate against women in cases of marriage, forced marriage, domestic abuse and inheritance – were denounced by many as "Islamophobic." (One has to wonder what the Quebec HRC tribunal would have to say about that issue: Islamophobia or misogyny? And what of the person accused of "Islamophobia" who in turn declares the term "Islamophobic" offensive and presses charges against his accuser?)

Pierre Trudel, a lawyer and professor of law at the University of Montreal, also feels that the bill in its current form stands limited chance of succeeding. But, he added in an interview, "it's fair to expect that it will be amended to answer the objections of many opponents." Otherwise, he said, the result will be "a significant chilling effect on speech."

Ironic, then, that nothing else could better hand a victory to those very terrorists the bill was written to subvert. In the words of Benjamin Franklin (as Silence Dogood), "Whoever would overthrow the liberty of a nation must begin by subduing the freeness of speech."

Abigail R. Esman, the author, most recently, of Radical State: How Jihad Is Winning Over Democracy in the West (Praeger, 2010), is a freelance writer based in New York and the Netherlands.