'The Cross is ISIS' main enemy; today no trace of a Cross can be seen in Mosul'

The Cross is symbolic of Islam's main enemy: Christianity. Under the terms of the dhimma contract and the Pact of Omar, Christians may not display the Cross openly, either on their buildings or on their person.

The breaking of crosses is a potent symbol of Islam's global supremacy in the end times. Muhammad prophesied that when Isa (the Muslim Jesus) returns, he will  "fight the people for the cause of Islam. He will break the cross, kill the swine and abolish jizya” and establish the rule of Allah throughout the world (Hadith from Sunan Abu Dawud, Book of Battles, 37:4310).

Demolition of churches and crosses, or converting churches into mosques, is a classic trait of Islam's treatment of Christians wherever it has conquered for fourteen centuries now. In our days, Muslims are even taking to breaking crosses in cemeteries, as seen in the infamous YouTube videos of 2012.

In Syracuse NY we recently saw the "breaking of the crosses" on a huge scale; a venerable Roman Catholic church was converted into a mosque, the crosses removed from the spires, and 10,000 crosses in the interior covered over in a hugely symbolic victory for Islam.

See also Raymond Ibrahim's recent article, 'Islamic Hate for the Christian Cross', and my own piece 'Islam's Hatred of Holy Icons — and what that means for Persecuted Eastern Christians'.

"The Cross is ISIS' main enemy; today no trace of a Cross can be seen in Mosul"
Pravoslavie, September 26, 2015: 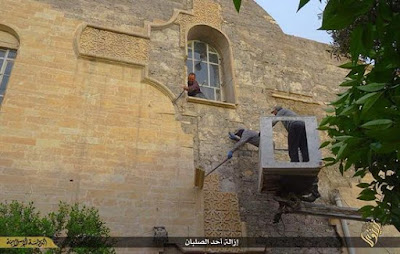 (Mosul, September 23, 2015) A war is currently being waged against Christianity on the territory of the Biblical city of Nineveh, which is currently under control of the “Islamic State” militants: according to eyewitnesses’ evidence, the fanatics are trying their best to eliminate the very memory of the Christian presence in Mosul, reports Ankawa news agency.

In his report, sent to the Ankawa agency’s staff writer Yunus Zanoun, the journalist A.S. from Mosul gave information about ISIS’s intention to wipe out all the Christian symbols from Nineveh, and that they are working hard in order to achieve this ambition. “The cross is ISIS’s main enemy; that is why today no traces of crosses can be seen in Mosul,” A.S. noted.

According to the journalist, the terrorists threw down all the crosses from domes of Mosul churches within two weeks after seizing city; they organized raids on houses of Christian residents of Mosul to destroy all the crosses and icons in the city.

“The dwellings were ravaged with great fury – and the vestiges of this hatred for Christianity can be seen here to this day… As for churches and monasteries, whole teams are involved in the job of dynamiting or partially demolishing their buildings. For example, large-scale work at the St. George’s Monastery in the al-Arabi neighborhood of Mosul was carried out to dismantle the iron crosses from the fencing, while the St. Ephraim’s Monastery in the ash-Shurta neighborhood was deliberately “enlarged”—this was done to conceal a huge cross carved on the front of the monastery’s main church,” A.S. related.

At the same time, the Alsumaria.tv portal reported that “Islamic State” militants exploded a number of Christian homes in the Karakush district. There is still no information on the number of victims or the extent of damage to the residents’ property.