The Maury County School District in Tennessee skips whole chapters on the Rise of Christianity and Judaism, but spends three weeks on Islam, and expressly instructs students to write and recite the Shahada, the Islamic profession of faith, by which one becomes a Muslim.

Parents are rightfully outraged at this blatant attempt at indoctrinating their children into the tenets of Islam. The preferential treatment of Islam in public education may also open Tennessee to lawsuits for violating the U.S. Constitution's "establishment clause."

This is hardly a new phenomenon. A landmark 2013 article in Breitbart News surveyed other instances of Islamic proselytization being forced upon public school students:


Public schools in Florida are teaching that Muhammad is “God’s messenger.” In Indiana, a Muslim family went from classroom to classroom in a public school, handing out material proselytizing for Islam. Texas public school students were made to wear burqas...

Tennessee has somehow become a real hotbed for this type of stealth jihad. From the same article:

This isn’t public education. This is dawah. And it is happening all over, but patriots are fighting back: in September 2013, an Ohio mom got an Islamic proselytizing video removed from her child’s seventh-grade history class. In November 2013, hundreds of parents protested against pro-Islam indoctrination contained in a public school textbook.

Judging from the below article ("they discuss Christianity a little bit during the Middle Ages"), Orthodox Christianity is likely not being addressed at all, which only allows the perpetuation of misperceptions about Russia, Greece, and Slavic nations, as well as of Middle Eastern and African Christians. This in spite of the fact that Orthodox Christians comprise the second largest Christian confession, with over 230 million believers worldwide.

Significantly, all Orthodox, Coptic and Oriental Christians have had epochal confrontations with Islam's 14-century-long jihad, many of them suffering mass martyrdoms, or, as the modern world terms it, genocide. But you can be certain that is not going to be addressed in the TN Core approved curriculum, certainly not while the anti-Christian regime in Washington and the American mainstream media try to foment public hatred of Christian Russia.

Christian parents, be aware of what your children are being taught! Make your voice heard! Public confrontation of such tactics is often successful in forcing government officials to back down and remove Islamic propaganda from school curricula.

7th-graders in Tennessee made to recite 'Allah is the only God' in public school
by Thomas D. Williams, PhD, Breitbart News, September 10, 2015: 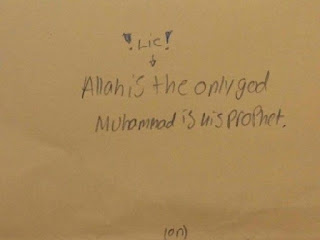 Middle school parents in Tennessee are up in arms on learning that their children were instructed to recite and write, “Allah is the only god,” as part of a world history project.

In the Maury County School District, students were assigned a Five Pillars of Islam project that included the translation of the pillar of “Shahada” as being, “There is no god but Allah; Muhammad is his prophet.”

Joy Ellis, the mother of a seventh-grader at Spring Hill Middle School, said that Christian children should not be instructed to write the Shahada.

“This is a seventh grade state standard, and will be on the TCAP,” Ellis said. “I didn’t have a problem with the history of Islam being taught, but to go so far as to make my child write the Shahada, is unacceptable.”

Another mother of a seventh-grade girl, Brandee Porterfield, complained to officials at Spring Hill Middle School because of its overemphasis on Islam to the exclusion of Christianity and Judaism.

Porterfield said she has no objections to her daughter learning details of the Islamic religion, but she objects to the fact that the history unit didn’t devote similar time to Christianity or Judaism.

“It really did bother me that they skipped the whole chapter on the rise of Christianity and they spent three weeks just studying Islam,” she said.

Porterfield and other parents were also concerned with the school’s decision to have children write and recite the Islamic creed.

“But what really did bother me,” Porterfield said, “was that they did this assignment where they wrote out the Five Pillars of Islam, including having the children learn and write the Shahada, which is the Islamic conversion creed.”

Porterfield said the class skipped Christianity because it’s not required by the state’s standards. Those standards, TN Core, are very similar to the national Common Core standards, though in May Gov. Bill Haslam signed a bill eliminating Common Core.

Jan Hanvey, Maury County Public Schools’ middle school supervisor, said that most of the three-week unit discussed things like government, culture, geography, and economics, rather than theology. She also said that the chapters on Christianity and Judaism are scheduled to be taught at the end of the year with the “Age of Exploration” unit.

Maury County Director of Schools, Chris Marczak, defended the curriculum in a statement, saying that the school system is in no way endorsing Islam over other religions or trying to “indoctrinate” students.

“It is our job as a public school system to educate our students on world history in order to be ready to compete in a global society, not to endorse one religion over another or indoctrinate,” Marczak said.

“They are not going over anything else. So for the students to have to memorize this prayer, it does seem like it is indoctrination,” she said.

A meeting between parents and school teachers and administrators has been scheduled for Sept. 17 to allow Porterfield and other concerned Springhill parents to voice their concerns about the state’s history curriculum.