"Having reduced our faith to a life-style choice and comforting holiday traditions, we Westerners cannot imagine a religion whose believers take its commands seriously, and see the world as the arena of a long spiritual struggle they are destined to win." 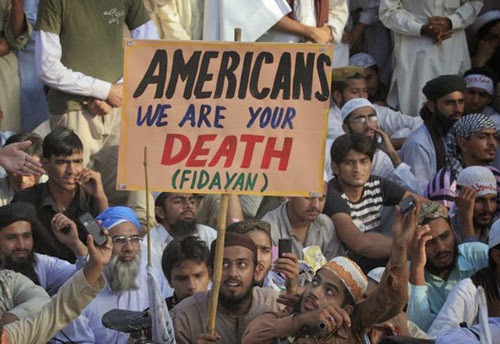 For three centuries the West built up enormous economic, cultural, and military capital that dwarfs and dominates that of the rest of the world. Other countries may hate and resent Europe and the United States, but they still have to imitate, adapt, or steal the technology, financial systems, and even popular culture of the West. Yet this dominance has come at a price for Westerners, one that contains the seeds of our decline.

One baleful effect of this achievement has been the erosion of the virtues and ideals that created Western dominance in the first place, a phenomenon long recognized as the cost of national success. Two thousand years ago the Roman historian Livy, surveying the wreckage of the Roman Republic, invited his reader to contemplate the “life and manners” of his ancestors that led to their dominance, and “then, as discipline gradually declined, let him follow in his thoughts their morals, at first as slightly giving way, next how they sunk more and more, then began to fall headlong, until he reaches the present times, when we can neither endure our vices, nor their remedies.” Livy specifically linked this decline to the vast increase of wealth that followed the success of Rome, and that “introduced avarice, and a longing for excessive pleasures, amidst luxury and a passion for ruining ourselves and destroying every thing else.”

Clichés, one might say, but no less true for that. The astonishing wealth of the West, more widely distributed than in any other civilization, the abandonment of religion as the foundation of morals and virtues, the transformation of political freedom into self-centered license, and the commodification of hedonism that makes available to everyman luxuries and behaviors once reserved for a tiny elite, have made self-indulgence and the present more important than self-sacrifice and the future. Declining birthrates, a preference for spending on social welfare transfers rather than on defense, and a willingness to beggar our children and grandchildren with debt in order to finance these entitlements– all bespeak a people whose wealth deludes them into thinking that they can imprudently ignore the future and indefinitely afford these luxuries that in fact insidiously weaken the foundations of our social and political order. This process is more advanced in Europe than in the U.S., but we in America have been steadily moving towards the same mentality.


Yet we Westerners have a vice peculiar to ourselves–thinking the rest of the world is just like us and wants what we want because we are the destination towards which historical progress is inexorably moving. Because the rest of the world does imitate us in certain respects, desires our technologies, even enjoys our popular culture, we think that they have the same attitudes we have toward religion, or social relations, or violence, or the supremacy of ideals like peace, tolerance, cooperation, openness, equality and the like. This arrogant assumption lies behind the whole edifice of international law, and the diplomatic processes and institutions that administer it, that we think can provide global order, peace, and prosperity.

But any law must rest on a consensus about what behaviors are acceptable, or what ideals are more important than others. Given the great global variety of belief about these issues, such a consensus that accepts Western notions as the norm is difficult, if not impossible to genuinely achieve. Lip service is indeed paid to the Western consensus, particularly by the global elites with whom our own elites are familiar, but that is a result of Western economic and military dominance. Behind the soothing talk of human rights, peace, and the diplomatic resolution of conflict, across the globe very different aims and beliefs continue to drive behavior that clashes with our own aims and beliefs. Yet blinded by our arrogant assumption that we are the vanguard of the future, we ignore those values and beliefs that contradict our own, or patronizingly explain them away as the consequence of ignorance, superstition, poverty, or the machinations of malignant elites and psychopathic dictators.

Survey foreign policy just in the years after 9/11, and we see the dangerous consequences of our narcissism. The whole “war on terror” has, under both parties, been compromised by the failure to understand historical Islam in its own terms, particularly its doctrine of violent jihad against the infidel. Numerous passages from the Koran, Hadith, and Islamic jurisprudence for 14 centuries have made explicit this religious imperative. During that same time, Europeans victimized by the invasions, raiding, occupations, and slaving justified by this doctrine understood that these depredations expressed the violent intolerance at the heart of Islam. Alexis de Tocqueville in 1838 wrote, “Jihad, Holy war, is an obligation for all believers … The state of war is the natural state with regard to infidels … The violent tendencies of the Koran are so striking that I cannot understand how any man with good sense could miss them.” Sixty years later Winston Churchill wrote of the Taliban’s ancestors, “But the Mahommedan religion increases, instead of lessening, the fury of intolerance. It was originally propagated by the sword, and ever since, its votaries have been subject, above the people of all other creeds, to this form of madness.” Surveying the global conflicts waged by Muslims, Churchill concluded, “The forces of progress clash with those of reaction. The religion of blood and war is face to face with that of peace.”

This consensus about Islam, the bitter fruit of 14 centuries of aggression and listening to what Islamic doctrine clearly says, today arrogant Westerners dismiss as the fruit of racism, intolerance, and imperialism. Assured of our superior knowledge and morality, we presume to explain to millions of Muslims that they don’t understand their own religion. Just recently CIA chief John Brennan, as Raymond Ibrahim reported, told the Council of Foreign Relations that al-Qaeda’s ideology is “a perverse and very corrupt interpretation of the Qur’an,” and that “al-Qaeda has hijacked” Islam and “really distorted the teachings of Muhammad.” But mysteriously, Brennan continues, despite this presumed heretical misreading of Islam, “that ideology, that agenda of al-Qaeda has gained resonance and following in many parts of the world.” Whether it is the terrorist attacks on 9/11, the misunderstanding of the “Arab Spring,” the Palestinian Arab genocidal hatred of Israel, or the danger of Iran’s acquisition of nuclear weapons, this distortion of Islam has hampered our response to aggression and indulged our delusion that a majority of Muslims want peace, prosperity, and freedom more than they want to obey Allah and live by Islamic precepts. Having reduced our faith to a life-style choice and comforting holiday traditions, we Westerners cannot imagine a religion whose believers take its commands seriously, and see the world as the arena of a long spiritual struggle they are destined to win.

Then there’s the fatuous response to Vladimir Putin’s aggression against Ukraine and the Crimea. Since many of us fancy ourselves internationalists and cosmopolitans too sophisticated for passionate national loyalty, we discount the powerful pull of ethnic and national identity. Believing in the international order as a sign of the human race’s progress and improvement, we sneer at Putin’s pursuit of national interests by violence as “19th century” and contrary to Russia’s true interests, as though we know those better than the Russians do. Meanwhile what we should be doing is calculating whether Putin is going to achieve his aims at the expense of our own interests and security. With similar arrogance, since we are hostile to the power of faith in people’s lives, we brush away Putin’s analysis of a hedonistic, heathenish West as insincere propaganda, forgetting that many Russians have not followed us in our disregard for religion as an archaic superstition. No doubt, those ethnic and religious motives are intermingled with more mercenary and chauvinistic ones, but that messy complexity of human behavior, the ability of people simultaneously to pursue two conflicting or mutually exclusive goods, is precisely what our Western consensus about the progress of human nature ignores. Hence we are vulnerable to the ruthless and the fanatic, since in every conflict we prefer to bring a diplomat to a gunfight.

So here we are, still living off that enormous capital amassed by our ancestors, and doing nothing to restore it. But those cultural and moral resources are dwindling by the day, and outside the West brutal rivals are watching and waiting, exploiting our arrogant delusions and manipulating our bankrupt ideals like “diplomatic engagement” in order to achieve their aims. Meanwhile, like Livy’s Romans, we “can neither endure our vices, nor their remedies.”