Holy New Martyr Kyranna as a Model for our Lives 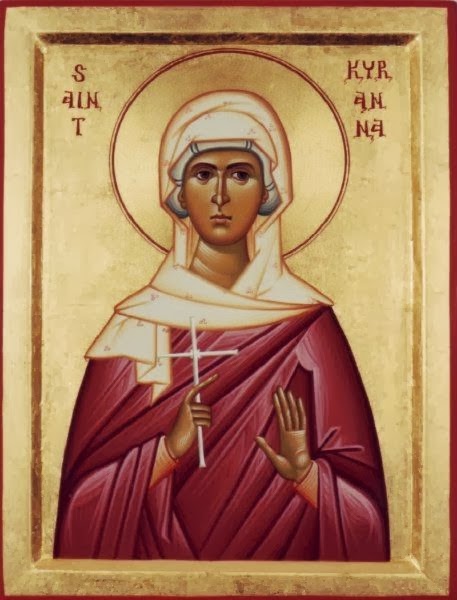 The Holy New Martyr Kyranna lived in the 18th century. She was born in the village of Avyssoka or Vyrsoka - in today's Ossa of Thessaloniki - from reverent parents. She was extremely beautiful, yet this was the reason for her martyrdom. This is because a girl who was beautiful in the years of the Turkish occupation was regarded by her own as a curse and misfortune. For the very beautiful girls were grabbed by the Turks and taken to their harem.

Saint Kyranna was seen by a janissary, who was a collector of taxes in the village, and wanted to convert her to Islam and marry her. She declined, remaining constant and steadfast in her faith, with the result that she underwent terrible torture. Finally, after having been tortured in prison, they hung her, and in this way she surrendered her soul into the hands of her Bridegroom Christ, whom she loved with all her soul.

The moment her soul "flew" to the heavens, her body, as well as the area of the prison, were illuminated with a most brilliant light. This light was seen by the imprisoned Christians, and they crossed themselves while glorifying God. This was also seen by some Muslims, however, and they were scared thinking that a fire broke out. The light retreated, but in its place remained a fine exquisite fragrance.

The body of the Saint was buried by Christians outside of Thessaloniki, in the Cemetery of Saint Paraskevi. Her memory is celebrated in Ossa of Thessaloniki, in the beauteous sacred church erected in her honor in 1840, on January 8 instead of February 28, the day of her repose, obviously so that it does not coincide with Great Lent.

Her life and deeds give us the opportunity to highlight the following:

The Neomartyrs, with their godly life and especially their martyrdom, during the difficulties of the period of the Turkish occupation, gave courage and strength to the enslaved Greeks, reviving their morale and fanning the flame they had within them, which often, due to their many sufferings, was nearly extinguished. They conveyed to them faith, bravery, courage and patience to be able to endure till the end.


Protopresbyter Fr. George Metallinos, in his book Turkokratia, writes among other things the following:

The Neomartyrs were the only firm support of the enslaved, especially after their martyrdom. This is why they were recognized as saints immediately, before the official proclamation of the Patriarchate.

The biographies of the Neomartyrs circulated and were read, either individually by the faithful, or in the synaxaria in the church. Their contribution proved to be huge. They were distinctly recognized as 'fighters for the faith and for freedom', who by their sacrifices assured that the opponent was not unconquerable.

He then indicates the difference between a Neomartyr and an Ethnomartyr, saying that:

Neomartyrs were distinguished by their spirituality and holiness, shown through wondrous signs that accompanied their martyrdom. Furthermore, the motivation of the Neomartyrs was not hatred for their opponents, but their love for Christ and people. Their martyrdom was a confession of faith. To the dictum 'faith and fatherland' the Ethnomartyrs threw their weight on the fatherland; the Neomartyrs however on faith.

The Neomartyrs, as their hymnist Saint Nikodemos the Hagiorite says, are "the renewal of our entire Orthodox faith." In his book titled New Martyrology, he says that the Neomartyrs are the martyrs who spilled their blood for Christ during the period of the Turkish occupation. He writes that "they suffered by the Turks, some to return to Muhammadism, from which they fled from alone, and others to remain in it, which they entered therein by force, having before been Christians." But they did not despair even for a moment before the threats of inhumane torture, and for this they were made worthy to seal their testimony for Christ by the blood of their martyrdom. Some of these were scholars and some were ordinary people. All of them, however, had perfect faith, true bravery and authentic love.

The synaxaria of the Martyrs and the Neomartyrs are spiritual nourishment and spiritual drink, which satisfies and quenches the thirst of all those who are hungry and thirsty for the righteousness of God, which is perfect love. Those who study their lives and deeds certainly derive great benefit from the way of life of these saints, from their spiritual bravery, as well as from their fervent love, which like a fiery flame set fire to their entire existence, which is why they rushed to their martyrdom without the slightest hesitation or fear.

Our era, unfortunately, is characterized by the frozen love of many and lukewarmness of faith, but also by the reluctance to experience the life in Christ, which leads to the transfiguration of the passions and to salvation. That is, it is essentially a refusal to walk with Christ, whose presence and words ignite a flame that burns in the heart and leads to the knowledge of God. In the Apocalypse of John, God rebukes the Bishop of the Church of Laodicea for his lukewarmness, telling him the following sobering and compelling words: "I know your deeds, that you are neither cold nor hot. I wish you were either one or the other! So, because you are lukewarm — neither hot nor cold — I am about to spit you out of my mouth" (Rev. 3:13-18).

He then goes on to indicate for him and for us the way of restoration and therapy, saying: "Those whom I love I rebuke and discipline. So be zealous and repent. Behold! I stand at the door and knock. If anyone hears My voice and opens the door, I will come in and eat with that person, and they with Me. To the one who is victorious, I will give the right to sit with Me on My throne, just as I was victorious and sat down with My Father on His throne" (Rev. 3:19-22).

Epilogue: These are not just words, they are life, if we will but choose to follow and obey them, if we will but choose to follow and obey Christ and His Church. We torment ourselves and those around us by not doing the good we know we should do. If we would only be obedient in the small things, we will begin to see the light of Christ in little ways all around us. Then we would not fear the multitudes of enemies arrayed against us on every side. In saying this I accuse myself first and foremost, as I am the laziest and most lukewarm of all.

Thank God for the holy season of Great Lent to push us towards true repentance and joy-producing sorrow!