Hagia Sophias: From Museums to Mosques

An excellent article, with plenty of historical context.

by Robert Ousterhout, The American Conservative
via Pravmir — March 12, 2014


Turkey’s ancient churches are losing a century of secular protection. 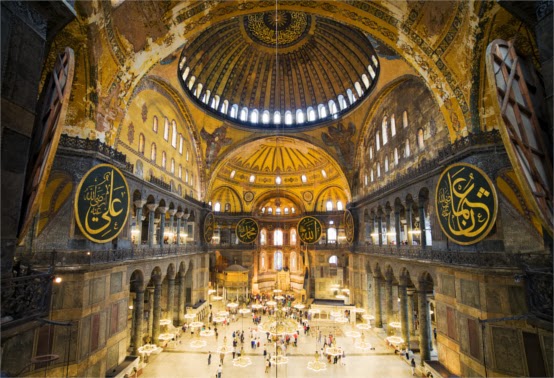 Just over 100 years ago, on March 26, 1913, at the height of the Balkan Wars, the Bulgarian army captured Edirne, once capital of the Ottoman Empire. To celebrate their victory, the Bulgarians planned to convert the grand, 16th-century Selimiye Mosque into a Christian church. Fortunately, the Bulgarian Tzartisa Eleanor intervened and put a stop to it. By July, the Bulgarian army was in retreat, Edirne returned to Ottoman control, and the incident was forgotten.

Looking back, the proposed conversion of an historic mosque into a church might strike us as shocking, but the United States and many other Christian countries were vocal supporters of the Bulgarians. Their ultimate goal was the conquest of Istanbul—once Constantinople and the capital of the Byzantine Empire—and the reconversion the Ayasofya Mosque (as it was known in Turkish) into the Church of Hagia Sophia. Emperor Justinian’s Great Church, dedicated to the Holy Wisdom (Hagia Sophia) had been converted to a mosque in the Ottoman Conquest of 1453, but for many it stood as a symbol of a lost, Christian civilization. Cries for its return might surprise modern readers, but the move was regularly advocated for in the pages of American newspapers.

An 1877 New York Times article begins, “How soon the crescent over the minarets of St. Sophia will be replaced by the cross, or how soon the minarets themselves will be entirely swept away, leaving the outlines of the church in their ancient condition, no seer has foretold.” A 1912 article predicts that the Bulgarians, advancing on the Ottoman capital, would soon plant the cross atop of Hagia Sophia. A decade later, the Greek Megale Idea held the conversion of Hagia Sophia as one of its top priorities. In 1921, a special service was held in St. John the Divine, with Orthodox and Episcopal clergy praying in six languages for the restoration of Hagia Sophia as a Christian sanctuary—enthusiastically reported in the American press.

It didn’t happen, of course.


The Turks won their war of independence. On November 24, 1934—the same day that Gazi Kemal was proclaimed Atatürk (“Father of the Turks”)—the Turkish Council of Ministers decreed that the Ayasofya Mosque should be turned into a museum: “Due to its historical significance … its conversion to a museum will cause humanity to gain a new institution of knowledge.” The secularization fit with Atatürk’s vision to reshape Turkey as a part of Western civilization. But one wonders if it came as a compromise, a defensive strategy when facing the unified desires of the very Christian West.

Seventy-nine years later, the Hagia Sophia remains the most popular museum in Turkey.

All this might seem like ancient history but for recent events in Turkey. Early in 2012, the identically named Ayasofya in Iznik (Byzantine Nicaea) was reopened as a mosque. Originally the church of Hagia Sophia and the setting of important Church councils, the building had been converted to a mosque with the Ottoman conquest. But it had fallen into disrepair long before the foundation of the Republic, and stood as a roofless ruin. For decades it had functioned as a museum and recently had begun to attract Christian pilgrims.

Then Deputy Prime Minister Bülent Arinç found a loophole in the law, insisting the building had never officially been deemed a museum, and that allowed its conversion. Reaction has been predictable: secularists and academics have decried the move; Islamists are delighted. Locals expect tourism to decline, even though admission fees are no longer collected.

The reconversion of one Ayasofya has spurred efforts for others. In May 2012, thousands of devout Muslims, organized by the Anatolian Youth Organization, prayed outside the Istanbul monument, shouting, “Break the chains! Let Ayasofya Mosque open!” As their leader explained, “Keeping Ayasofya Mosque closed is an insult to our mostly Muslim population of 75 million. It symbolizes our ill-treatment by the West.”

Early in 2013 it was announced that the Hagia Sophia/Ayasofya in Trabzon (Byzantine Trebizond) would reopen as a mosque. With its rich Byzantine fresco program lovingly restored, the 13th-century building has been a museum for the last half-century. Never the focus of controversy, the reconversion seems to have been instigated solely on the basis of its name.

A major force behind the conversion movement, Vakiflar (Ministry of Pious Foundations) Director Adnan Ertem proclaimed that, of the Ayasofyas in Turkey, five are functioning as mosques, while two are “inactive” (i.e., museums), calling their present owner, the Cultural Ministry, an “occupying force.”

A parliamentary commission is now considering an application to reopen Ayasofya in Istanbul as a mosque.

This time they’re serious. Indeed, supporting the reopening of Istanbul’s Ayasofya has become the litmus test of the true believer. Protests by the academic community have fallen on deaf ears, as Erdogan’s Islamist government presents the conversion as a move toward “religious freedom.”

How far have we come in the last century? A few recent incidents are telling. The 5th-century St. John Stoudios (the Imrahor Mosque) is the oldest surviving church in Istanbul and the center of the city’s most important Byzantine monastery. Destroyed by fire in 1894, the archaeological site belongs to the Cultural Ministry as an historic site, but its evocative remains have never been properly documented. A parliamentary commission has determined that the basilica will be rebuilt to function as a mosque.

The Kesik Minare in Antalya faces the same fate, despite public opposition. Recently excavated, the ruin preserves substantial remains from a Roman temple, a Byzantine church, a Crusader church, and an Ottoman mosque. As in so many other sites, its rich history would disappear if rebuilt.

One final example: The Arap Camii in Istanbul, originally a 14th-century Dominican church, suffered minor damage in the 1999 earthquake, after which plaster began to fall from the vaults, revealing remnants of the original frescoes and mosaics. Although the paintings were conserved last year, the Vakiflar covered them up again. They are no longer visible.

One wonders if this is to be the fate of Turkey’s rich, colorful, and heterogeneous past. At least the Tzaritsa had the good sense to say no.

Prof. Robert Ousterhout directs the Center for Ancient Studies at the University of Pennsylvania.