Raymond Ibrahim: Why Are Christians the World’s Most Persecuted Group?

Another must read essay by the author of Crucified Again: Exposing Islam's New War on Christians.  Read and share. And pray...

Why Are Christians the World’s Most Persecuted Group?
by Raymond Ibrahim — Feb 27, 2014 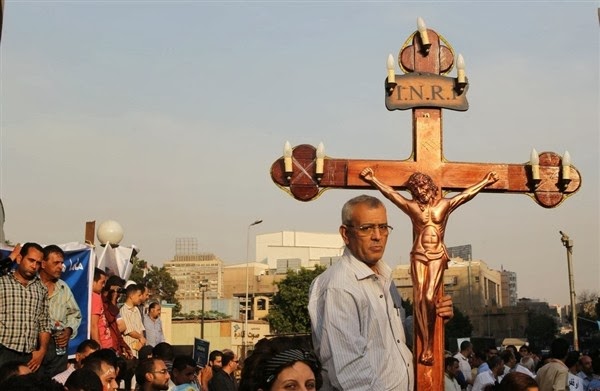 Why are Christians, as a new Pew report documents, the most persecuted religious group in the world?  And why is their persecution occurring primarily throughout the Islamic world?  (In the category on “Countries with Very High Government Restrictions on Religion,” Pew lists 24 countries—20 of which are Islamic and precisely where the overwhelming majority of “the world’s” Christians are actually being persecuted.)

The reason for this ubiquitous phenomenon of Muslim persecution of  Christians is threefold:


1. Christianity is the largest religion in the world.  There are Christians practically everywhere around the globe, including in much of the Muslim world.  Moreover, because much of the land that Islam seized was originally Christian—including the Middle East and North Africa, the region that is today known as the “Arab world”—Muslims everywhere are still confronted with vestiges of Christianity, for example, in Syria, where many ancient churches and monasteries are currently being destroyed by al-Qaeda linked, U.S. supported “freedom fighters.”  Similarly, in Egypt, where Alexandria was a major center of ancient Christianity before the 7th century Islamic invasions, there still remain at least 10 million Coptic Christians (though some put the number at much higher).

Due to sheer numbers alone, then, indigenous Christians are much more visible and exposed to attack by Muslims than other religious groups throughout the Arab world.   Yet as CNS News puts it, “President Obama expressed hope that the ‘Arab Spring’ would give rise to greater religious freedom in North Africa and the Middle East, which has had the world’s highest level of hostility towards religion in every year since 2007, when Pew first began measuring it. However, the study finds that these regions actually experienced the largest increase in religious hostilities in 2012.”

2. Christianity is a proselytizing faith that seeks to win over converts.  No other major religion—including Buddhism, Hinduism, and Judaism—except Islam itself has this missionary aspect (these faiths tend to be coterminous with their respective ethnicities: Buddhists, Asians; Judaism, Jews; Hinduism, Hindus).    Thus because Christianity is the only religion that is actively confronting Muslims with the truths of its own message, not only is it the primary religion to be accused of proselytizing but, by publicly uttering teachings that contradict Muhammad’s, Christians are accused of blaspheming as well.  Similarly, this proselytizing element is behind the fact that most Muslims who apostatize to other religions overwhelmingly convert to Christianity.

Finally, if indigenous Christians are many in the Middle East, because that is the cradle of Christianity, in other regions with large Muslim populations, such as sub-Saharan Africa and East Asia, Christian missionaries have won over millions of converts to the faith—many of whom are now targeted and persecuted according to Islam’s anti-apostasy law, which often calls for the death penalty.

3. Christianity is the quintessential religion of martyrdom.  From its inception—beginning with Jesus followed by his disciples and the early Church—many Christians have accepted martyrdom rather than recant their faith, in ancient times at the hands of Romans, in Medieval and modern times at the hands of pious Muslims and others.  Few other religions encourage their adherents to embrace death rather than recant, as captured by Christ’s own words: “But whoever denies me before men, I will deny him before my Father in heaven” (Matt 10:33; see also Luke 14:33).”

Conversely, Islam teaches Muslims to openly renounce their faith (taqiyya)—not just when their lives are threatened, but even as a stratagem of war—as long as they remain Muslim in their hearts.  Other religions and sects also approve of dissimulation to preserve their adherents’ lives.  Back in the 1800s, for instance, Samuel M. Zwemer, a Christian missionary, observed that in Iran “Bahaism enjoys taqiyya (concealment of faith) as a duty, but Christianity demands public profession; and hence in Persia it is far easier to become a Bahai than to become a Christian.”

To summarize, because of their sheer numbers around the globe, including the Muslim world, Christians are the most likely targets of Islamic intolerance; because sharing the Gospel, or “witnessing,” is a dominant element of Christianity, Christians are most likely to fall afoul of Islam’s blasphemy and proselytism laws, as even the barest pro-Christian talk is by necessity a challenge to the legitimacy of Islam; because most Muslims who apostatize to other religions convert to Christianity, it is as Christians that they suffer persecution; and because boldness in face of certain death—martyrdom, dying for the faith—is as old as Christianity itself, Christians are especially prone to defy Islam’s anti-freedom laws, whether by openly proclaiming Christianity or by refusing to recant it, and so they die for it.