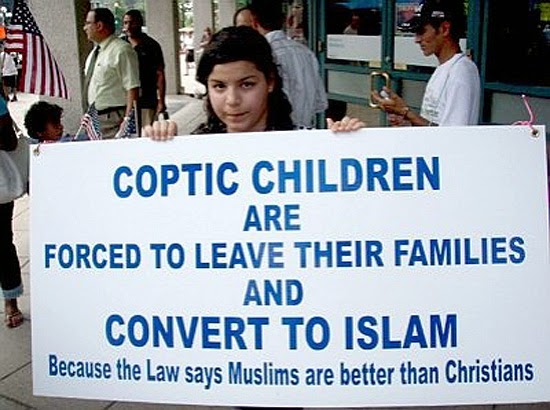 In the al-Nafura region of Asyut, Egypt, an increasingly common scene took place earlier this month.

According to sources, four “unknown persons” armed with automatic weapons came upon the Coptic wood merchant while he was working in front of his home, coerced him into their car, and sped away.

Later, one of his relatives received a phone call demanding a hefty ransom to release the Christian man: 500,000 Egyptian pounds—the equivalent of approximately $72,000 USD, an exorbitant sum for any resident in Upper Egypt.

Such scenarios—Coptic children or adults abducted at gunpoint and held (and sometimes killed or forced to convert to Islam) by “unknown persons” in exchange for money—are on the rise in Egypt (see here, here, here, here, and here for some recent examples).


The logic of these many “unknown persons” is simple: according to Islamic law, non-Muslims are required to pay jizya, or tribute, in order not to be molested or plundered (see Koran 9:29).

However, because the jizya has been abolished since the 19th century, thanks to the intervention of colonial powers, these “unknown persons” have found a way to make a profit that is conscionable enough for them: target Christian minorities in their midst for ransom money and justify it all in the context of receiving their just due of jizya from them.

If Christian infidels are not made to pay tribute to the state—as Koran 9:29 mandates and as Salafis regularly insist—the “jizya-vigilantes” will get that money one way or another.

The prevalence of this mentality becomes more evident when one considers that the phenomenon of Muslims kidnapping and holding for ransom Christians is occurring all around the Muslim world—including in Syria, Iraq, Libya, Pakistan, Nigeria, Sudan—and not just Egypt.

Raymond Ibrahim is author of Crucified Again: Exposing Islam’s New War on Christians, pgs. 199-216 of which detail and document the phenomenon of jizya vigilantism.