As we approach the Lord's Passion Week, it seems timely to consider one of the most prominent of the Neo-martyrs. 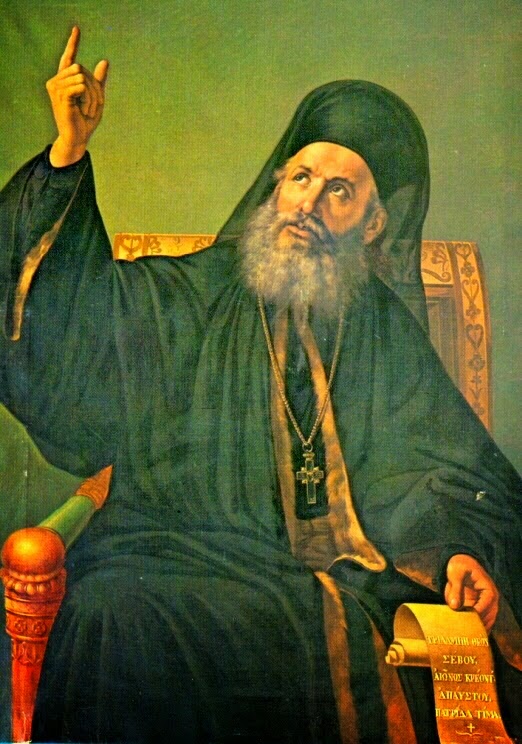 Born in 1745 in the bosom of a poor family from Dimitsana in the Peloponnese, Saint Gregory received his earliest education from his uncle who was a hieromonk, and then went to live with him in Smyrna. Becoming a monk in the monastery on the island of Strophades, he completed his theological studies on Patmos. On his return to Smyrna, Metropolitan Procopios, who showed him a fatherly affection, made him archdeacon and then ordained him priest. When Procopios was elevated to the Patriarchate in 1788, he consecrated Gregory to succeed him.

For twelve years, the holy hierarch governed the great and wealthy city of Smyrna, the metropolis of Hellenism in Asia Minor, with wisdom and apostolic zeal. He had several churches rebuilt there, founded schools and organized a system of charity for the underprivileged. In 1797, he was elected Ecumenical Patriarch and immediately undertook to enhance the patriarchal dignity by having the Phanar palace rebuilt. He also founded a publishing house in which he edited books in the vernacular, which contributed greatly to the cultural and spiritual awakening of the Greek people. The holy hierarch was vigilant about the strict observance of the ecclesiastical canons and the moral rectitude of the clergy. In those troubled times, when the Greeks, who had been held under the Ottoman yoke for almost four centuries, were brewing up for a general uprising, the Patriarch, aware of his pastoral responsibilities, exerted himself to temper the warlike spirits while secretly nurturing national feeling.

After just a year and a half, he was denounced to the Sultan by some bishops whom he had reprimanded for their conduct, and was exiled to Chalcedon and then to the Monastery of Iveron on the Holy Mountain. During this forced stay on Athos, the Saint visited all the monasteries, preached the word of God and was a model of monastic life to all. He then gave the blessing to Saint Euthymios (March 22) to go and offer himself for martyrdom, and expressed his joy and pride at the news of the martyrdom of Saint Agathangelos (19 April), thus showing that he considered death for love of Christ to be the supreme goal and crown of the Christian life.


Recalled to the Patriarchate in 1806, he was received with enthusiasm by the Christian people of Constantinople, and courageously resumed his pastoral work and the raising of moral standards among the clergy. But in 1808, a coup d'état brought Sultan Mehmed II to power. He constrained Gregory to retire and withdraw to the island of Prinkipos, and then again to Mount Athos, where he resumed his patristic studies and his ascetic life, keeping himself informed, meanwhile, of the situation in the Church and among the people.

In 1818, he was contacted by members of the 'Society of Friends' (Filiki Eteria), a secret society that was preparing for revolution by trying to bring together and coordinate the various scattered forces. Gregory showed his support for the cause of liberty with enthusiasm; but, judging that the time was not yet ripe, he advised patience. A very short time later, he was recalled for the third time to the Ecumenical throne and resumed his activity, especially encouraging the foundation of schools in which the pupils could receive a Hellenic formation. He also organized a 'Mercy Fund,' which received funds from affluent Greeks for the aid of needy Christians.

As soon as a greatly-disorganized insurrection of the Greeks from the Danube principalities began on 1 February 1821, there immediately followed terrible and bloody reprisals in Constantinople and in the great centres of the Ottoman Empire. The Turks massacred all the eminent men who had links with the principalities and arrested four bishops. When the government had given the order for all the eminent Greek families of Constantinople to assemble at the Phanar, the Patriarch, in the hope of avoiding a massacre, made himself answerable for their allegiance at the Sublime Porte. Not content with this declaration, the Sultan forced Saint Gregory to sign the excommunication of the leader of the insurrection, Alexander Ypsilantes, and his companions.

On 31 March, a general revolt in the Peloponesse was proclaimed, and three days later, on the Monday in Holy Week, the Great Interpreter, representing the Greek community at the Sultan's court, was executed along with other eminent citizens. Foreseeing what his fate would be and refusing suggestions that he flee, the Patriarch said: "How could I abandon my flock? If I am Patriarch, it is to save my people, not to give them over to the swords of the Janissaries. My death will be of more use than my life, because through it the Greeks will fight with the energy of despair, which often produces victory. No; I will not become a laughing-stock for the world by taking flight, so that they can point their finger at me and say: 'Look at the killer Patriarch!'"

On Easter Day, 10 April, Saint Gregory celebrated the Liturgy of the Resurrection calmly and with great solemnity, interrupted only by his tears. At the end of the ceremony, the news of the revolution in the Peloponnese was confirmed to him. He then replied: "May the Lord's will, now as always, be done!" Some hours later, they came to tell him of his deposition, and the Janissaries took him off to prison with no consideration for his person. Submitted to interrogation and torture, he kept a majestic silence, that was only broken when, on their urging him to renounce his faith, he said: "The Patriarch of the Christians must die a Christian!" Shortly afterwards, as soon as a successor was elected by the Holy Synod, he was hanged at the gateway of the Patriarchate, that has ever since remained closed in commemoration of this wicked act. At the last moment, Saint Gregory lifted his hands up to heaven, blessed the Christians who were present, and said: "Lord Jesus Christ, receive my spirit!" While the Turks and the Jews were casting stones on the Patriarch's corpse, the vizier who had been charged with the execution sat smoking in front of it. 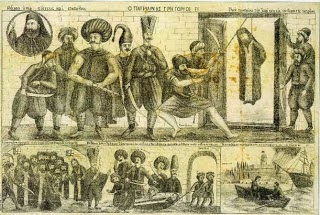 They left the body hanging for three days, with the document containing the indictment round its neck. Finally, the Jews bought the body for 800 piastres, dragged it through the streets to gibes and cries of triumph, and threw it in the sea. In spite of the heavy rock that was tied to it, the body floated and was recovered by a Greek ship flying Russian colors, which took it to Odessa. Venerated by the crowd for several days, the holy relics showed no sign of corruption.

In 1871, on the occasion of the fiftieth anniversary of the Greek Revolution, the body of the holy Patriarch was translated to Athens and placed in the Metropolitan Cathedral with the greatest solemnity.

He was officially canonized by the Ecumenical Patriarchate on April 10, 1921.