Bright Friday: The Life Giving Spring of the Mother of God 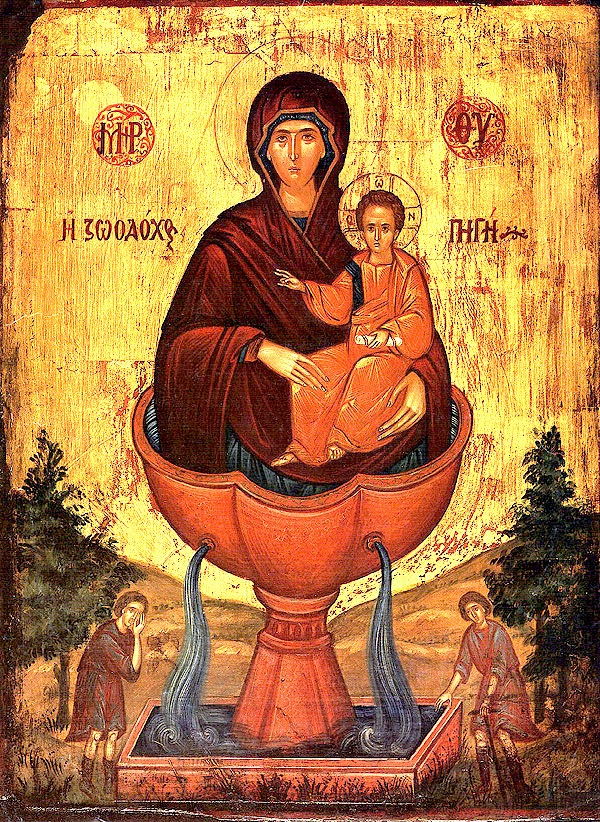 Today we commemorate the Life-Giving Spring of the Most Holy Theotokos.

The church dedicated to this unique visitation and miracle of the Theotokos has been desecrated several times by Muslims — even as recently as 1955 — yet rebuilt each time, by the intercessions of our All-Holy Lady.

There once was a beautiful church in Constantinople dedicated to the Mother of God, which had been built in the fifth century by the holy Emperor Leo the Great (January 20) in the Seven Towers district.

Before becoming emperor, Leo was walking in a wooded area where he met a blind man who was thirsty and asked Leo to help him find water. Though he agreed to search for water, he was unable to find any. Suddenly, he heard a voice telling him that there was water nearby. He looked again, but still could not find the water. Then he heard the voice saying “Emperor Leo, go into the deepest part of the woods, and you will find water there. Take some of the cloudy water in your hands and give it to the blind man to drink.Then take the clay and put it on his eyes. Then you shall know who I am.” Leo obeyed these instructions, and the blind man regained his sight. Later, St Leo became emperor, just as the Theotokos had prophesied.

Leo built a church over the site at his own expense, and the water continued to work miraculous cures. Therefore, it was called “The Life-Giving Spring.”

After the Fall of Constantinople in 1453, the church was torn down by the Moslems, and the stones were used to build a mosque. Only a small chapel remained at the site of the church. Twenty-five steps led down into the chapel, which had a window in the roof to let the light in. The holy Spring was still there, surrounded by a railing.

After the Greek Revolution in 1821, even this little chapel was destroyed and the Spring was buried under the rubble. Christians later obtained permission to rebuild the chapel, and work began in July of 1833. While workmen were clearing the ground, they uncovered the foundations of the earlier church. The Sultan allowed them to build not just a chapel, but a new and beautiful church on the foundations of the old one.

Construction began on September 14, 1833, and was completed on December 30, 1834. Patriarch Constantine II consecrated the church on February 2, 1835, dedicating it to the Most Holy Theotokos.

The Turks desecrated and destroyed the church again on September 6, 1955. A smaller church now stands on the site, and the waters of the Life-Giving Spring continue to work miracles.

There is also a Life-Giving Spring Icon of the Most Holy Theotokos which is commemorated on April 4.


O most favored by God, you confer on me the healing of your grace from your inexhaustible Spring. Therefore, since you gave birth incomprehensibly to the Word, I implore you to refresh me with the dew of your grace that I might cry to you: Hail, O Water of salvation.