Marking the one-year anniversary of the abduction of Bishops John and Paul of Aleppo, Syria. 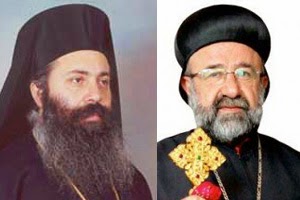 It is now precisely a year, 365 days, since the kidnapping of the two Metropolitans of Aleppo, the Syriac-Orthodox Archbishop Mar Gregorios Yohanna Ibrahim and the Greek-Orthodox Archbishop Boulos Yazigi, which took place on the road between Aleppo and the Turkish border on April 22, 2013.

The kidnappers murdered the driver on the spot while a fourth person in the car managed to escape unharmed. While rumors abound, and we have endured a host of different reports and messages concerning life, injury, or death, to date there have been no verifiable signs of the two Metropolitans – neither of life nor of death. The Greek Orthodox and Syriac Orthodox churches in Aleppo have been missing their leaders. In addition to pastoral work, the churches also operate schools and hospitals, and run humanitarian programs for all persons in need, regardless of their color or creed.

The location of the Metropolitans and their state of health, as well as the identity and aims of their kidnappers, is still unclear. According to multiple media reports, it is assumed that Abu al Banat and a jihadist Group of Chechen led the kidnapping.


They may have been acting on a tip-off with the aim of robbery, since the two bishops were en route to negotiate the liberation of two priests and had apparently had more than half a million US Dollars in the car. Or perhaps the kidnappers were acting to show opposition to Russian interests and its support of the al-Assad government, since both archbishops were clearly recognizable as Orthodox clergy.

Whatever the case, and the rumors, the fact is that the bodies or even relics of the two Metropolitans have not been found since April 22, 2013. It is unmistakable that whoever holds them has two highly important and valued persons of great repute, whom they could also use for prisoner exchange. Moreover, both archbishops’ captivity could be of strategic value for the Assad Government, since they were outspoken proponents of peace and against all violence, and their disappearance can conveniently be blamed on the “terrorist opposition.”

The Syrian Orthodox Patriarch Mar Ignatius Zakka I passed away on March 21 2014, thus leaving a void in the top leadership of that Church at a perilous juncture for Christians in Syria and the wider Middle East. Electronic polls unanimously nominated the captive Bishop Mar Gregorios Yohanna Ibrahim as “The People’s Patriarch.” The Church Synod was about to endorse the popular demand and to unprecedentedly elect a Patriarch in Captivity, with the church to be governed by the Locum Tenets with a Council of Bishops until his release.

The Holy See mentioned the kidnapping explicitly in a report in January 2014. Pope Francis in his “Urbi et Orbi” Message of Easter Sunday, April 20, claimed, “We pray in a particular way for Syria,” and expressed the hope that the “defenseless civil population” will be protected from the violence and get the aid they need.

Clearly, stopping the ongoing maiming and killing as well as releasing all those who are in captivity is a humanitarian imperative – for anyone, independent of religion and belief. It would also considerably contribute to a reduction of tensions and permit finding a perhaps more feasible way for a negotiated settlement. The people are tired of war.

In the Syria conflict, more than 155,000 people have died since 2011, several hundreds of thousands are injured or have vanished, and more than 7 million are displaced within Syria (receiving little or no effective aid) while more than 2.5 million Syrians are now outside Syria in the neighboring states. With perhaps one of the most heinous aspects of the conflict concerning brutalities against women and children, individual suffering seems to have fallen upon regional and international numbness.

The more the international community’s attention is consumed by crises elsewhere, such as in the Ukraine and in Asia, and the more the human drama plays out in the missing airliner ME370 or in the sunken ferryboat in South Korea, the more such suffering has become relativized – the war in Syria, the brutality and suffering of its peoples, have vanished from international attention. This offers the warring parties the chance to fight to the fullest and to operate with outmost brutality: from the repeated use of chemical weapons, to barrel bombs, to indiscriminate aggression against civilian quarters, including the utterly repulsive use of hunger and starvation against entire living areas of civilian communities, thus reducing young and old, women and children, to just dispensable instruments of warfare – while completely ignoring the laws of war and the most basic rights of humanity: namely at least to spare the lives of women and children and all civilians and to offer them basic food, water, etc.

Even food has been used as a weapon! An entire economy of war is now flowering in Syria – the government is even earning income by trading raw materials with ISIS. This is hence unfortunately benefitting all sides involved, which are apparently even profiting from the deliberate starvation of thousands of civilians via trades of food and water.

All this has been committed in the 21st century by an ally of great and medium powers, just some 2000 miles away from Rome. In spite of being documented extensively in real time it has not managed to overcome numbness and relative international inaction. International efforts to deliver food and assistance are incomplete, ineffective, or sometimes deliberately hampered by all parties, especially the government.

All this in turn however fosters radicalization and contributes to eradicating any restraint of brutality in the fighting by all sides, including the religious radicalization amongst a disorganized opposition fighting ferociously against an ever more brutal and indiscriminate Syrian government, which has attracted a heightened influx of foreigners into Syria who become engaged in concomitant violent rivalries amongst its most radicalized members – thus making Syrian civilians increasingly caught in a horrendous three-way warfare. Unbeknownst are the ghastly dimensions of continuous suffering of children, women, and men.

Archbishop Mar Gregorios Yohanna Ibrahim has been an eminent advocate of peaceful co-existence of all religions and ethnicities, advocating reconciliation, forgiveness, dialogue, and safeguarding of the unique pluralistic fabric of Syrian society and national unity. He called at many international gatherings for the immediate cessation of violence by all, immediate and effective humanitarian assistance, an all-encompassing dialogue, and a solution at the negotiating table in order to put an end to the Syrian tragedy. For instance, the Archbishop said prior to his kidnapping: “I will stay here, I cannot leave Aleppo. I have to be with my people.” In spite of the fact that this kidnapping case was declared in fall 2013 a national matter of utmost importance for the Syrian Arab Republic, so far all efforts to secure the release of the Metropolitans have been fruitless. Ambassador Lakhdar Brahimi also emphazised the importance of resolving this and other kidnappings urgently and peacefully during the Geneva II conference.

The immediate release of the Metropolitans would send a powerful, positive, and encouraging Easter message to all those men, women and children who have suffered from the war, kidnappings and the deteriorating human security in Syria.