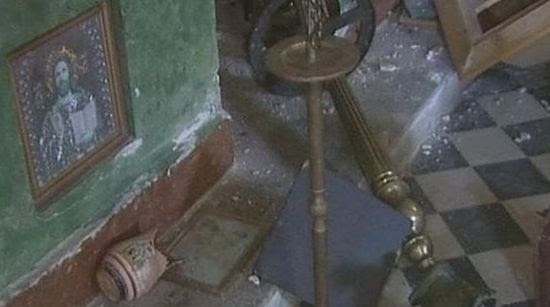 After the interval of just one month, unidentified blasphemers have desecrated one more Orthodox Church on Crete, reports AgionOros.ru with the reference to the Romfea.gr agency.

This time, the Orthodox Church of the Mother of God Kardiotissa ("Of the heart") in the village of Profitis Ilias became the target of vandals.

The police suspects of the crime individuals of the Arab [i.e., Muslim — Arabic is the sacred language of Islam] origin, as anti-Christian slogans, written with coal in Arabic, were discovered on the church walls.


The unidentified culprits, who this time again fled the scene of the crime absolutely unnoticed, caused extensive damage to the church. The vandals mostly directed their rage at the church altar: some items were broken down, others overturned and spilt with paint.

This crime has become a new episode in the series of arsons and attacks of Orthodox churches, with vandals leaving graffiti in Arabic at the scene of crime.

The previous act of vandalism took place late in February, when unidentified persons in broad daylight broke into the Churches of St. Spiridon and St. Parasceva, situated within 500 meters from each other in the municipality of Minoa Pediadas. Then they set both churches on fire, having broken several pews and having desecrated icons and holy liturgical vessels.

Fortunately, local residents saw smoke at the right moment and called the fire brigade, who managed to put out the fire at the early stage.