The Icon of Crucified Asia Minor

The Asia Minor Catastrophe (which this icon commemorates) was the last major event in the larger Orthodox Christian Genocide perpetrated by the Turks against the Christians of Armenia, Greece, Thrace, Pontus and Syria from 1894 to 1923. For an excellent summary of the entire genocide in the wider context of the 20th century's persecution of Christians go here. For info on a new book on the Asia Minor Catastrophe of 1922 (also called the Greek Genocide) see here. 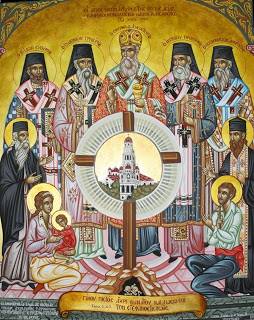 To the left of the Cross is the depiction of a Monk, who represents all the Monks massacred during the Asia Minor Catastrophe.

To the right of the Cross is the depiction of a Cleric, who represents all the Clergy massacred during the Asia Minor Catastrophe.

To the bottom right is depicted a Male of Asia Minor, who represents the entire male population that suffered and was massacred during the Asia Minor Catastrophe.

To the bottom left is a Woman-Mother and Child of Asia Minor, who represent the entire female and child population that suffered and was massacred during the Asia Minor Catastrophe.

These Holy Martyrs who gave their lives are honored and commemorated by the Holy Church on the Sunday before the Feast of the Elevation of the Honorable Cross on September 14th.