Robert Spencer is the force behind Jihad Watch, which reports daily on Islam's war against the world, and is the author of twelve books on Islam, a couple of which have made it to the NY Times Bestseller List. 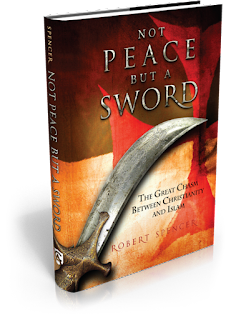 I intend to do a full review this Autumn of Mr. Spencer's latest work, Not Peace But a Sword, a very thorough theological cross-study showing why Islam is incompatible with Christianity. I am deep into the text, and can give it my highest recommendation. In fact, in many ways, I consider it to be the Roman Catholic counterpart to my book, Facing Islam, in that it really delves into the differences in the respective scriptures and traditions. Also like my book, Not Peace But A Sword warns against uncritical inter-religious dialogue of Christians with Muslims, by analyzing Islam's polar opposite worldview, and how that impacts Islam's understanding of key aspects of any religious dialogue, including notions of peace, tolerance, truth, the purpose and destiny of man, the 'Faith of Abraham', etc.

In the below interview, Robert Spencer does his weekly 'Jihad Watch' segment on Michael Coren's The Arena (SunTV, Canada) actually in studio, as he was recently in Canada for a speaking tour. This is a rather personal segment, in which Mr. Spencer shares about how his grandparents were exiled from the former Ottoman Empire during the deadly dangerous era of the Armenian/Orthodox Genocide. One cannot but ponder God's providence in sparing Mr. Spencer's ancestors from the wave of Islamic violence which took the lives of 4 million Christians in his native land.

We all owe Robert Spencer a great debt of gratitude for his diligence and fearlessness in writing and speaking about Islam. His outstanding book, The Truth About Muhammad, was one of the first texts I read on the subject, and like all his books, is very sober and informative, with copious footnotes and bibliography.

So, as the title of this post says, AXIOS to Robert Spencer, and may God keep him safe and grant him many years!
(For you non-Orthodox, "Axios" means, "He is worthy," and is typically shouted by the faithful at the ordination of a priest in affirmation.)