Islamic apostasy laws in action. Read and share this harrowing story of a brave Christian confessor from Sudan, whose enemies are "those of her own household." 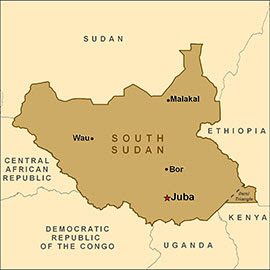 JUBA, South Sudan (Morning Star News) – After her family in Khartoum, Sudan nearly buried her alive for leaving Islam and authorities imprisoned her for six months, a Sudanese Christian thought she might find refuge in Ethiopia.

She had fled to Ethiopia in 2010, five years after putting her faith in Christ. By the following year, she found herself face-to-face with hostile Sudanese officials.

“Some security personnel from the Sudan Embassy in Addis Ababa informed me that I must leave Ethiopia because I was an infidel,” the 35-year-old woman, whose name is withheld for security reasons, told Morning Star News.

She had come to faith when a Christian woman told her about the sacrificial death and resurrection of Jesus, and soon she began attending church. When her family learned of her conversion, she said, they locked her in a dark room for six months and arranged visits from an Islamic sheikh who struck her 10 times each day.

“After six months, I was released and was very frustrated and went into hiding, but my family discovered where I was hiding in Khartoum and reported to the police that I had left Islam,” she said.

Her family learned of her hiding place, found and beat her, and threw her from a second floor landing.

“I was bleeding and my ribs were broken,” she said, tears streaming from her eyes.

Family members threatened to charge her with apostasy unless she repented and returned to Islam, telling her, “You are an infidel, you are no longer a good Muslim,” she said. Apostasy is punishable by death in Sudan, which upholds sharia (Islamic law) as a source of legislation, according to the U.S. Department of State.


“They called a Muslim sheikh to force me to repent and come back to Islam, but I refused the attempt,” she said, adding that the sheikh would later accuse her of “being possessed by an evil spirit, which he said was a Christian evil spirit.”

Family members hid her in the trunk of their car and took her home with the intent of burying her alive, she said. She felt close to death, she said, and by keeping her hidden, the family hoped Muslim neighbors would accept that her absence meant she had met her expected end as an apostate. The neighbors, however, called police.

“They dug the grave, and as they were putting me into the grave, the police entered the house,” she said. “I believe it was the Lord Jesus who made the police arrive on time and saved me from that inevitable death.”

Officers arrested family members for attempted murder, but they were later released.

After a few days of recovery, she managed to escape again; this time, security officials endeavored to track her down.

“Security started to search for me everywhere, accusing me of leaving Islam,” she said. When National Intelligence and Security Services (NISS) officials caught up with her four years later, in early 2009, they incarcerated her for one month, she said.

After her release, in March 2009 she tried to flee the country by air. Authorities were notified, removed her from an airliner about to take off from Khartoum International Airport and confiscated her passport.

During interrogation, NISS personnel tortured her as punishment for leaving Islam and trying to flee the country, she said. She was imprisoned for another six months at Omdurman Prison for Women.

“The security officials took my documents, and after serving six months of imprisonment, I decided to go into hiding and sought refuge in the house of some Christians in Khartoum who gave me food and shelter and took care for me,” she said.

These ordeals took place before the 2011 secession that opened the way for harsher treatment of Christians in Sudan, as President Omar al Bashir vowed to adopt a stricter version of sharia (Islamic law) and recognize only Islamic culture and the Arabic language. The estimated 300,000 to 500,000 Christians in Sudan have suffered increased arrests and deportations and destruction of church buildings and affiliated centers, and foreign Christians have been driven out, church leaders say. In a report issued in April, Christian Solidarity Worldwide noted an increase in arrests, detentions and deportations of Christians since December 2012.

Freedom of religion is a key provision of the International Covenant on Civil and Political Rights, to which Sudan is a signatory. Due to its treatment of Christians and other human rights violations, Sudan has been designated a Country of Particular Concern by the U.S. State Department since 1999, and in April the U.S. Commission on International Religious Freedom recommended the country remain on the list this year.

After her six months in prison, eventually the convert from Islam managed to cross into neighboring Ethiopia by land in 2010, only to encounter more threatening Sudanese officials. Even now in predominantly Christian and animist South Sudan, she describes her life as “fear and agony,” as there seems to be nowhere to hide from hostile Islamists.