'If Trump Proposal Had Been In Place, OSU Jihad Attack Wouldn’t Have Happened' - Robert Spencer

"Simply to protect ourselves, there should be an end to Muslim immigration, combined with a clear notice to Muslims in the United States that any action on behalf of sharia supremacism is unacceptable." — Robert Spencer


'If Trump Proposal Had Been In Place, OSU Jihad Attack Wouldn’t Have Happened'
by Robert Spencer, Jihad Watch, December 5, 2016: 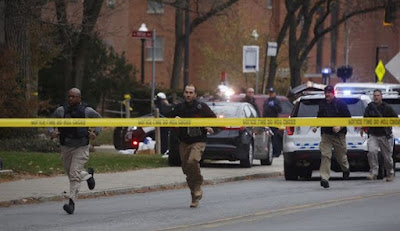 Muslim “refugee” and Ohio State University student Abdul Razak Ali Artan last week set off a fire alarm on campus, the drove his car into the crowd of students evacuating the building. Then he jumped out of his car and began stabbing people with a butcher knife. This latest jihad attack on American soil vindicates President-elect Trump on Muslim immigration.

After the attack, Trump tweeted: “ISIS is taking credit for the terrible stabbing attack at Ohio State University by a Somali refugee who should not have been in our country.”

Indeed, not only should Artan not have been in the country, but if the proposals that Trump has advanced regarding Muslim immigration had been in place, he would not have been, and the attack at Ohio State University would never have happened.

Trump has called for a temporary moratorium on immigration from countries that are hotbeds of jihad terror activity. KARE11.com reported that “Artan was a Somali refugee and Ohio State student who left his homeland with his family in 2007. They lived in Pakistan before coming to the U.S., where Artan became a permanent resident in 2014.”

Somalia and Pakistan: two epicenters of the global jihad. If Trump had been President and his ban had been in place, Abdul Razak Ali Artan would never have entered the United States at all.

This sensible approach to Muslim immigration is long overdue. Back in 2008, I wrote this in my book Stealth Jihad, among my proposals for how the jihad, both violent and stealthy, could be stymied in the United States:

This is a simple matter of national security. Immigration policy must work toward the integration of all immigrants, and the all-encompassing societal program of sharia makes the integration of pious Muslims ultimately impossible.

While there are undoubtedly millions of Muslims who have no interest in jihad either by violence or stealth, no Islamic authorities anywhere in the world have declared heretical or in any way unacceptable the idea that non-Muslims must be fought against by various means and subjugated under the rule of Islamic law. Unless and until that begins to happen, no one can be sure of the sentiments of any individual believer.

Consequently, simply to protect ourselves, there should be an end to Muslim immigration, combined with a clear notice to Muslims in the United States that any action on behalf of sharia supremacism is unacceptable.

But ending Muslim immigration to America must be considered a long-term goal, since such a measure is impossible in today’s political climate. The proposal would inevitably be denounced as “racist,” despite the fact that jihadist supremacism is not a race.

But at the very least, immigration officials should immediately adopt a program to screen Muslims entering the United States for jihadist sentiments. This will provide grounds for deportation if an entrant renounces some aspect of sharia supremacism on his immigration application and then works for it once in the country.

At the time, this proposal was greeted with derision, or worse. Even in FrontPage Magazine, which is singular in recognizing the nature and magnitude of the jihad threat, then-managing editor Ben Johnson wrote:

“Analyzing the problem is one thing; solving it is another. Spencer’s prescriptions on what to do will rankle some and lead to his further character assassination. He is at his best when calling for the government to impose existing laws – and most gets to the point when he calls for a revival of patriotism, the self-assurance necessary to deny Islamic encroachment, white liberal guilt, and multiculturalist recriminations of the greatest nation in the history of the world. He is at his most questionable in calling on the government to ‘End Muslim immigration into the United States.’”

Trump has changed all that, to the extent that now, even the tired, pusillanimous, cowardly “conservative” establishment, late to the party as always, as always leading from behind, is catching up. Back in January 2016, National Review denounced Trump for, among other things, his suggestion that there should be a temporary moratorium on Muslim immigration:

“Not since George Wallace has there been a presidential candidate who made racial and religious scapegoating so central to his campaign. Trump launched his campaign talking about Mexican rapists and has gone on to rant about mass deportation, bans on Muslim immigration, shutting down mosques, and building a wall around America. America is an exceptional nation in large part because we’ve aspired to rise above such prejudices and guarantee life, liberty, and the pursuit of happiness to everyone.”

But after the OSU jihad attack, National Review published an article entitled “It’s Time for Honest Talk about Muslim Immigration,” saying: “Some immigrants from jihad zones will be involved in murdering Americans. Is this an acceptable price for compassion?”

That was always the concern. The time for National Review’s previous tardy and pallid me-tooism is long past. Abdul Razak Ali Artan proved that. How many more of them must there be before sane immigration policies are implemented?