...calls on American Muslims to “turn the Christian New Year into a bloody horror movie.”

Dear Muslim reader, aren't you tired of all the killing and carnage in the name of Islam and Allah? Isn't it time for you to repent of your false religion which commands such hatred and bloodlust, and turn to Jesus Christ in the Orthodox Church, that you may have eternal life? We stand ready to welcome all sincere inquirers!

Whose call will you listen to? 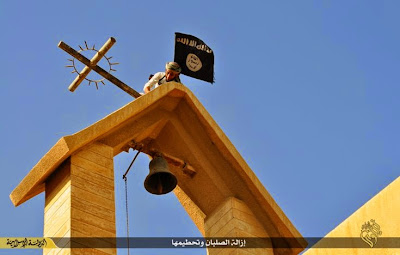 The Islamic State published the names and addresses of thousands of churches in the United States and called on its adherents to attack them during the holiday season, according to a message posted late-night Wednesday in the group’s “Secrets of Jihadis” social media group.


The series of messages appeared in a pro-ISIS group on Telegram, which also provides manuals for the use and preparations of weapons and explosives for aspiring assailants. The information, distributed in a number of posts, was all previously available online and includes a public directory of churches across all 50 states. (Vocativ does not publish specific information found in lists like these.)

In another group post, a member summoned “the sons of Islam” to target “churches, well-known hotels, crowded coffee shops, streets, markets and public places,” and shared a list of addresses in the United States, as well as in Canada, France and the Netherlands….