This powerful new book comes at the perfect moment, to help mobilize popular support for an immediate freeze on Muslim immigration, and to help protect the USA from not only Islamic terrorism, but also the insidious 'stealth jihad' or 'civilizational jihad' which has been enabled for decades by political correctness, government collusion, and subversive activities by Muslim Brotherhood front groups.

I am well into Stealth Invasion, and did not want to wait any longer to recommend it. Author Leo Hohmann draws upon decades of experience as an investigative journalist to factually build his case, while using real-world, on-the-ground reporting to highlight the magnitude of the crisis we face.

The facts he presents are irrefutable, the pace gripping. It's a great read, and ranks right up there with Raymond Ibrahim's Crucified Again, Tim Furnish's books, and Robert Spencer's Stealth Jihad and other titles as an essential text to inform, warn, and equip Americans for the long struggle ahead to preserve our freedom to live and worship freely in our homeland. 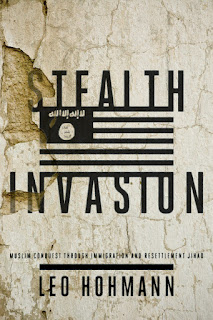 Leo Hohmann is a veteran journalist and news editor for online news giant WND, with a particular focus on immigration and Islam. Prior to joining WND, he worked more than two decades as a newspaper reporter and editor in suburban Atlanta and in Charlotte and Raleigh, North Carolina.

Americans are shocked by ongoing news reports chronicling growing chaos in Europe, where massive Muslim migration is wreaking havoc on the continent – including horrendous acts of mass terrorism, an epidemic of rape and sexual assault against European women, and large, jihadist-rich enclaves where even police are hesitant to enter.

Yet, few realize that America is heading down the same suicidal path.

As veteran investigative journalist Leo Hohmann documents in Stealth Invasion: Muslim Conquest through Immigration and Resettlement Jihad, an international network of mostly Muslim Brotherhood-linked activists has been building its ranks within the United States for more than three decades, aided by a U.S. immigration system seemingly obsessed with welcoming as many unassimilable migrants with anti-Western values as possible. As a result, largely secret plans for major population changes in hundreds of U.S. cities and towns are already being implemented.

As Stealth Invasion reveals, the Muslim Brotherhood has a well-defined strategy for conquering America, not necessarily with violent jihadist attacks – although we should expect those to increase – but through more subtle means collectively called "civilization jihad."

Very simply, civilization jihad calls for changing a nation by changing its people and its values – gradually, over time.

Stealth Invasion connects the dots between the problems of growing violence and unrest that have plagued Europe and what is now unfolding across America. The terror attacks on Chattanooga, Orlando, San Bernardino, St. Cloud, Minnesota, and the Chelsea area of Manhattan were all carried out by Muslim immigrants, or, in the case of San Bernardino and Orlando, by sons of Muslim immigrants. A surprising number of foiled attacks have also been plotted since 9/11 by Muslim refugees and immigrants.

Stealth Invasion blows the lid off a corrupt, fraudulent program that has been secretly dumping Third World refugees, many of them radical, on American cities for three decades. Readers will meet the people and groups behind this shadowy resettlement network, which starts at the United Nations and includes the White House, the U.S. State Department, some surprising church groups, and corporate honchos involved in everything from investment banking and meatpacking, to Florida vacations and yogurt manufacturing.

Americans have been kept largely in the dark about the radical plans to permanently transform their nation. Until now.

Stealth Invasion uncovers how various cities have become refugee hot spots and examines grassroots uprisings where citizens have challenged this secret cabal and won. Armed with knowledge of the government’s methods for dealing with local resettlement backlash, Hohmann provides details on how concerned Americans can most effectively respond.