Coptic Bishop Angaelos of the UK: 'Forgiveness is by no means synonymous with ignoring justice'

"As Christians, we also believe in forgiveness, but forgiveness is by no means synonymous with ignoring justice. Forgiveness ensures that our own hearts are not entangled in a web of anger and resentment, or corrupted by feelings of hatred or revenge. Forgiveness is ultimately liberating and empowering, but at the same time, justice is essential; not for the purposes of punishment, but to secure and protect our societies in which people must respectfully live side by side."

Link includes embedded video of Bishop Angaelos on the BBC 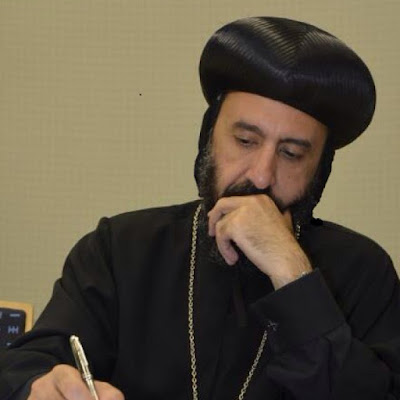 HG Bishop Angaelos comments a day after brutal bombing and murder of 25 people in St Peter’s Coptic Orthodox Church, Cairo.
Today is a day of many emotions: sadness, nervousness, uncertainty, and understandably even anger at times. That is because yesterday was a day in which we witnessed the worst of humanity, when innocent women and children who decided to worship their God in their spiritual home had their lives needlessly and senselessly ended without warning. They were used as pawns; a means to an end. To the perpetrators of this heinous crime, their lives clearly held no greater value than scribbles on a strategic page; a plan that was to be executed for a cause to which they were merely incidental, collateral damage. Yesterday we saw beautiful lives lost, families separated and broken, and whole communities grieving; a truly painful time that has not only affected Coptic Christians, but Egyptian society at large, Muslims and Christians alike, and millions around the world.

Crimes will always be perpetrated and criminals will continue to exist, but such a strategic, vicious act is difficult to comprehend. It is indeed difficult to understand how a person might plan and execute such a horrific, ruthless and barbaric plot against innocent women and children. The only way to do this is to completely disregard the relevance, value and sanctity of any life potentially affected by these actions.

In recent decades, we have seen recurring acts of violence against Christians and Christian communities in Egypt. Time and time again, very few, if any, perpetrators have been brought to justice, and we subsequently continue to witness an escalation of these attacks. This is not a matter of blame, but accountability, with an expectation that barbaric acts such as these should never occur, but if they do, that their perpetrators are rightly and fairly held to account. This is not a call for vengeance, but a deterrent against similar future plans and aspirations.

We are thankful for the overwhelming outpouring of emotion and support that we have personally received from friends, and even indeed strangers, around the world in response to this horrific and heartbreaking attack, but it is unfathomable that at the same time, others have politicised this atrocity by actually laying blame on those targeted, maimed and killed because of the perceived political stance of Christians in Egypt. They have even gone so far as to imply that Christians and the Church were somehow complicit in this crime to gain sympathy, allegedly using their daughters, sisters, mothers and grandmothers as means to a ludicrous contrived political end.

As Christians, we have hope in the belief that good will prevail despite the seemingly increasing evil in our world. Life will certainly go on and atrocities such as these will by no means defeat us. Today, tomorrow and the next day will continue to bring new beginnings and greater resilience, but there will continue to be a deep effect on many that may remain with them for weeks, months, and even years to come.

As Christians, we also believe in forgiveness, but forgiveness is by no means synonymous with ignoring justice. Forgiveness ensures that our own hearts are not entangled in a web of anger and resentment, or corrupted by feelings of hatred or revenge. Forgiveness is ultimately liberating and empowering, but at the same time, justice is essential; not for the purposes of punishment, but to secure and protect our societies in which people must respectfully live side by side.

Chapter 16 of the Gospel of Saint John tells us that in the world “we will have tribulation” but to be “of good cheer” for the Lord Jesus Christ has “overcome the [evils of this] world.” The Scriptures also tell us that “the time is coming that whoever kills [us] will think that he offers God service” (John 16:2). This reality has been lived for two millennia, through the reign of Diocletian, and continues until today as we still witness targeted persecution throughout the world. In facing these struggles throughout history, too many precious lives have been lost, and this is why we must advocate for the safeguarding of every life, so that many more do not continue to suffer on our watch.

As we prepare for feasts and celebrations: Christmas in the Gregorian calendar, the New Year, the Feast of the Nativity in the Julian calendar, and Epiphany, sharing them with family and friends around us, there are families that will not be coming together, and communities that will not be celebrating, as a result of this great loss. We remember and pray for them all, and assure them that they will not be forgotten. We also live confident that if we, as limited imperfect beings, are moved by their loss and suffering in this way, that our perfect, all-loving, all-powerful, and all-just God hears their cries and will by no means forsake or forget them, but strengthen, support and comfort them as only He can.