‘Sandboxing’ Islam: How to Protect America from Jihad Terrorism

Donald Trump’s recent call for “a total and complete shutdown of Muslims entering the United States until our country’s representatives can figure out what is going on,” is not a new or original idea.

Senator Rand Paul put forth a similar policy recommendation way back in July, following the Chattanooga jihad attack, and again in November called for a halt to “all immigrants, visitors and students” from countries with “large jihadist movements” from entering the United States.

In the wake of the San Bernardino jihad massacre, Mr. Paul and his fellow senator and presidential candidate Ted Cruz have amped up this message, calling for a halt on immigration from nations with “active terrorist networks,” and a “moratorium on refugees from countries with a significant al Qaeda or ISIS presence,” respectively.

These candidates and all elected officials with eyes to see need to work hard to “make the case” for these steps, which may sound drastic to some, and hate-filled and bigoted to those on the Left.

The below article I wrote back in August is a modest effort to “make the case.” By using visual concepts like “sandboxing,” and enforcing the Foreign Agents Registration Act (FARA), America can protect herself from jihad attacks, and reverse seven years of willful blindness in the face of Islamic terrorism.

When I start hearing “sandboxing” and FARA being discussed by Republican presidential candidates, I’ll feel greatly encouraged. As I conclude below,

It is time to “sandbox” Islam in America, and use decisive, legal means to counter its threat to our freedoms and our way of life.

Enforcing the Foreign Agents Registration Act (FARA) can give us the legal and tactical edge in countering the threat from Islamic supremacism. 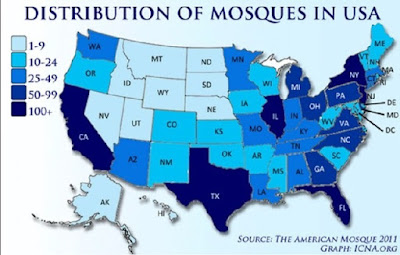 It should be obvious for anyone with eyes to see that Islam — its scriptures, the example of Muhammad, its doctrines, and its overall ideology — is behind the spread of most terrorism and unrest in the world today.

From the Islamic State (ISIS), Boko Haram, al-Nusra and al-Shabaab, to slightly older groups such as al-Qaeda, the Taliban, and the Muslim Brotherhood, to lesser known jihadi organizations throughout Central Asia, India, Southeast Asia, the Pacific Rim, and China, a survey of terrorist attacks reveals Muslim involvement throughout the entire world.

Here in the United States, we are seeing a dramatic rise in Muslim “lone wolf” jihad terrorist attacks (and, as some have described them, “known wolves”). Further, from all points of the compass, we are seeing literally tens of thousands of Muslims flocking to the Middle East to join the Islamic State caliphate and support the jihad with their very lives.

The scenario gets worse. Some analysts argue that we are seriously underestimating the numbers of Western Muslims joining the Islamic State.

Here at home, we have a “full blown insurgency.” The FBI has already arrested seventy IS-inspired Muslim terrorists, and has active investigations of IS-inspired jihad plots in all 56 of its field offices. NewsMax reports “the government’s terrorist watch list carries 700,000 to a million names.”

This is all indisputable fact. The threat is real and growing. Even worse, the threat is specifically from devout, observant Muslims who attend mosque. Behind every lone-or-known-wolf jihadi and every Islamic State recruit there is a mosque where they are receiving instruction in Islam.

That should give us pause, as four separate studies in recent years show that 80% of mosques in the U.S. teach, preach or advocate for jihad and the imposition of sharia law in America.

Confirming these mosque studies are proven links between mosques and terrorists.  For example, one of the two Mississippi Muslims recently arrested for trying to join the Islamic State is the son of the imam at the local mosque. Many terror-linked mosques have spawned multiple jihadis. The Phoenix mosque attended by the Garland TX jihadis is notorious for having two other members in federal prison on terrorism-related convictions. Perhaps most infamous is the Islamic Society of Boston, which was attended not only by the Boston Marathon Bombers, but by numerous other jihad-terror-linked Muslims. The list goes on and on.

For many people, especially in our political class and certainly among the 2016 field of presidential candidates, there seems to be no solution to this national security nightmare of terror-linked mosques and known wolf jihadis. To date, there is no coherent, principle-based policy to address Islamic terrorism in the United States.

The Solution: ‘Sandboxing’ Islam in America

This is where I believe the simple analogy of “Sandboxing” can help us.

You’ve probably heard the term, even if you’re not a computer geek. One tech source offers this definition:

A “sandbox” is a play area for young children: it is supposed to be safe for them (they cannot hurt themselves) and safe from them (it is sand, they cannot break it). In the context of IT security, “sandboxing” means isolating some piece of software in such a way that whatever it does, it will not spread havoc elsewhere.

If we think of America as being, ideally, a safe and free place for its citizens, within which we should be able to live, work, play, and, as the ubiquitous bumper sticker says, “Coexist,” then when it comes to Islam and Muslims, we need a solution analogous to the IT security process of “sandboxing.” We need to isolate malicious jihadi forces, “in such a way that whatever they do, they will not spread havoc elsewhere.”

What would “sandboxing” look like when it comes to Muslims in America? In practice, it could include the following policies:

The law presciently allows for application in gray areas such as Islam presents, as it states that any entity with a “political or quasi-political capacity” disclose their relationship with the foreign government and information about related activities and finances. The purpose is to facilitate “evaluation by the government and the American people of the statements and activities of such persons.” [Source]

Islam certainly thinks and behaves like a foreign power, is guided in America by the Muslim Brotherhood, the Saudis and other foreign Islamic groups, and has a definite political dimension. (See also here.)

These are just some starting points to aid in getting this conversation going. The American Freedom Defense Initiative (AFDI) has an 18-point platform with similar policy proposals which may be considered as well.

We must have hope that, just as illegal immigration has become a major issue in the presidential race, so also we may be successful in elevating public awareness of the clear and present danger from Islam and Muslim jihad terrorists. This is a generational if not century-long struggle ahead of us, and should resonate with voters.

The concept of “sandboxing” is, I believe, the most helpful image in making our case to not only the American people, but also to the political elite and the 2016 candidates.

We must publicly challenge the Republican presidential candidates to take the initiative, and to fearlessly raise the issue of Islam up to the same level as Immigration. We must demand of them to be bold and daring when it comes to defeating jihad. The defense of our nation, our freedoms, and the lives of our fellow citizens and men-and-women in uniform should be paramount for whoever would be Commander-in-Chief. This issue will be topmost on that person’s desk in the Oval Office from Day One. Better to tackle it now with a strong and visionary policy, than to be knocked back on our heels by a surprise attack in 2017.

Now is the time to put misbehaving Muslims and their terror-linked-mosques on time-out. Islam is at war with us. More and more Muslims are heeding the summons from Islamic State and Al-Qaeda, taking up arms against us in this war, and killing American citizens right here at home. Denying the reality and threat of Islamic jihad is not a valid policy, it is civilizational suicide.

It is time to “sandbox” Islam in America, and use decisive, legal means to counter its threat to our freedoms and our way of life.