The Nativity: Christ 'submits Himself to that evil in order to destroy it forever'

Without specifically mentioning Islam, over a millennium of Muslim persecution of Christians, the genocide against Christians today, or the theological jihad of the tawhidists, His Beatitude Metropolitan Tikhon, in less than 350 words, conveys the depth of the mystery, paradox and irony of the Incarnation:

[The Word of God] sees a world in bondage to the forces of evil and He submits Himself to that evil in order to destroy it forever. 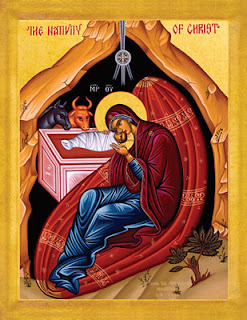 It is because Jesus Christ, the Incarnate Word and Son of God, the Second Person of the Blessed Trinity, voluntarily "submits" (the meaning of the word, "Islam") Himself to the forces of evil, that His extreme humility, His kenotic sacrifice, destroys that evil forever.

This is why the forces of Islam "rage against the Lord and against His Christ" (cf. Psalm 2), for they know that they have been defeated by Him Who is pure, holy, humble, and meek, Who becomes man and sacrifices Himself to restore all mankind to the Father.

Through His meekness, the proud are humbled.

Through His submission, those who try to force submission from others are overthrown.

Through His forgiveness from the Cross, even His persecutors can be converted and inherit the Kingdom!

We shall have to endure much to enter the Kingdom, but as His Beatitude and Bishop Paul remind us, Christ has already won the victory through His Incarnation, His sufferings, His crucifixion, and His Resurrection. Let us walk as Children of Light, and confess Him faithfully, so that we shall not be ashamed at His Second and Glorious Coming!


Nativity of our Lord 2015
Archpastoral Message of His Beatitude, Metropolitan Tikhon

Christ is born! Glorify Him! 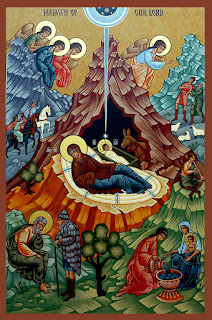 To the Honorable Clergy, Venerable Monastics, and Pious Faithful of the Orthodox Church in America,

My Beloved Brethren and Blessed Children in the Lord,

It is my joy and privilege to greet all of you on the radiant feast of the Nativity of our Lord, God and Savior Jesus Christ.

In some 700 communities large and small sprinkled across the North American continent, from Canada, to the United States and Mexico, we gather together to celebrate the wonder of God’s entry into human history.

For many in our society this message is still as foolish as it was in the first century.  But we continue to stand with the saints beside the manger, the Cross and the empty tomb to proclaim God’s sacrificial love for us and for His Creation.  As we sing on Christmas Day:

I will give thanks to Thee, O Lord, with my whole heart; I will make all Thy wonders known. In the company of the upright, in the congregation, Great are the works of the Lord! They are studied by all who have pleasure in them! His work is glory and beauty, and His righteousness endures forever.  —Christmas Day, 1st Antiphon (Psalm 111:1-3)

Truly, “Great are the works of the Lord!”

He sees a world filled with suffering and He Himself voluntarily suffers to make a path to healing.

He sees a world dying and He Himself dies to bring resurrection and unending life.

He sees a world in darkness and He Himself enters that darkness to bring a divine light that can never be extinguished.

He sees a world in bondage to the forces of evil and He submits Himself to that evil in order to destroy it forever.

The God Who is “ineffable, inconceivable, invisible, incomprehensible and eternally the same” empties Himself of power and divine privilege.  He becomes a weak, fragile human being in order to share fully in our broken existence and in so doing offers the possibility of a life in communion with Him, with each other, and with all creation.

May our Lord bless each of you, your communities, and your families as you celebrate His Nativity and serve Him.

With love in the New-Born Christ,

+ Tikhon
Archbishop of Washington
Metropolitan of All America and Canada

Source, with PDF versions in Russian, Ukrainian, Bulgarian, Romanian, and other languages.