As we prepare to celebrate the Birth of Jesus Christ, the Word of God Incarnate, here is a reminder of what is real:


Living in the Real World
Fr. Stephen Freeman, Glory to God for All Things, November 24, 2015 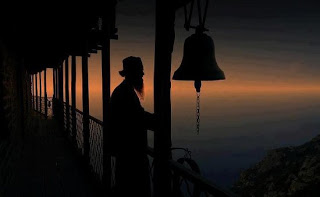 Nothing exists in general. If something is beautiful or good, it is manifest in a particular way at a particular time such that we can know it. And this is our true life. A life lived in a “generalized” manner is no life at all, but only a fantasy. However, this fantasy is increasingly the character of what most people think of or describe as the “real world.”

A monk lives in a monastery. He rises early in the morning and prays. He concentrates his mind in his heart and dwells in the presence of God. He will offer prayers for those who have requested it. He will eat and tend to the work assigned for him to do. And so he lives his day. He works. He prays.

And someone will say, “But what does he know about the real world?” But what can they possibly mean? He walks on the earth. He breathes the same air as we do. He eats as we do and sleeps as we do. How is his world any less real than that of anyone else on the planet?

A man lives in a city. He wakes in the morning, turns on the TV as he gets ready for the day. He dashes out the door (he’s running late). He gets to his car, listens to the news on the radio, takes a couple of calls on his cell phone. He gets to work and for every minute he does something that he thinks of as “work,” he spends at least another checking his email, looking quickly at Facebook, and maybe checking the news. He gets into an argument at lunch about what should be done somewhere else in the world and who should do it. Angry and distracted, he is frustrated with himself because he swore he was not going to have that same argument today. He goes back to work with the same routine. After work he drops by a bar, has a couple of drinks and decides to stay and watch some of the game. He gets home late and heads to bed.

Who is living in the real world? The man-in-the-city’s life is “real,” it actually happens. But he is distracted all day from everything at hand. He never notices himself breathing unless he’s out of breath. He swallows his food as quickly as possible. Even the beers he has at the bar are as much for the buzz as for the taste.

If the man refrained from these things his friends might taunt him, “What are you? Some kind of monk?”

What is the “real” that we should live in?

Increasingly, the modern world lives in distraction. But on account of the dominance of shared media experience, that “distraction” is treated as somehow “real.” The daily, sometimes non-stop, attention to this distracted “reality,” creates a habit of the heart. It is a common experience for someone “cut off” from this shared media experience to feel isolated and alone. Of course, three days of no media changes nothing. My attention to the distraction is not at all the same thing as attention to the world itself. For whatever reality might be, it is decidedly not the distorted snapshots presented in our newsfeed.

The experience of “reality” that is media-generated has the character of “things in general.” The habits that form within us as we give attention to this abstraction are themselves vague and ill-defined. We “care” about something, but we have nothing in particular that we can do about it. We are angry over extended periods about things that are greatly removed from our lives. Our attention itself becomes a passive response rather than a directed movement of the soul. Our lives largely become an experience of manipulation – only it is we ourselves who are being manipulated.

Against this is the life of Christian virtue. It is little wonder that frustration accompanies our efforts towards acquiring the virtues. The soul whose habits are formed in the distracted world of modernity cannot suddenly flip a switch and practice prayer of the heart. We sit still and attempt to pray and our attention wanders. It is little wonder that our attention wanders. It has been trained to be passive and follow a media stream. In the stillness of the soul, there is no media stream and our attention feels lost and empty.

This is the reason for the life of the monk. He lives as he does in order to be attentive to reality – to see and hear, taste and touch what is true and at hand. It is not so different than most human lives 200 years ago, before the rise of mass culture. And it is real. Deeply real. It is also the basis of the sacramental life. God gives us Himself, His life-creating grace, in very concrete and particular ways. The reason is simple – we were created to live in a concrete and particular way. The life of abstraction is alien to the life of grace. There is no sacrament of the abstract, vague or general. The only Presence is a real presence.

If we want to pray, then we will have to live as though we are praying. We cannot live in the abstract and suddenly attend to the real. We cannot “care” and then turn to love. “To live” is an active verb. The passions of mass experience are something else.