The ISIS letter relates the classic "invitation" to Islam, which is commanded in the Koran and by the words and example of Muhammad:

“Fight those who believe not in Allah nor the Last Day, nor hold that forbidden which hath been forbidden by Allah and His Messenger, nor acknowledge the religion of Truth, (even if they are) of the People of the Book, until they pay the Jizya with willing submission, and feel themselves subdued” (Qur’an 9:29).

Muhammad said: “Fight against those who disbelieve in Allah. Make a holy war…When you meet your enemies who are polytheists, invite them to three courses of action. If they respond to any one of these you also accept it and withhold yourself from doing them any harm. Invite them to (accept) Islam; if they respond to you, accept it from them and desist from fighting against them…. If they refuse to accept Islam, demand from them the Jizya. If they agree to pay, accept it from them and hold off your hands. If they refuse to pay the tax, seek Allah’s help and fight them." (Sahih Muslim 4294.)


Wherever Islam spreads and Muslim numbers increase, this is the result. Mark Durie has dedicated an entire book to this very topic, titled The Third Choice: Islam, Dhimmitude and Freedom. It is one of the most important books on Islam for a Christian to read.

How may Orthodox Christians prepare themselves for the trials ahead?

1. By an ever deepening life in Christ through the Church, the sacraments, repentance and confession.

2. By daily prayer and reading of the Holy Scriptures, especially the Gospel.

3. By reading the lives of saints, especially the accounts of the Holy NeoMartyrs under the Ottoman Muslims, as found in the book Witnesses for Christ: Orthodox Christian Neomartyrs of the Ottoman Period, 1437-1860.

4. Reading accounts of martyrs during our own age. This would include during the Soviet horror (see New Confessors of Russia, St Herman Press), and of new martyrs of the 21st century under the sword of Islam, a number of which can be found on the left-hand column of this blog.

Brothers and sisters, let us be faithful to Jesus Christ even to the end, that we may inherit the crown which He has promised to those who love Him and look for His Coming!

Swedish Government in “State of Panic” After ISIS Letters Give Dozens of Citizens Three Days to Convert to Islam or Be Decapitated
Raymond Ibrahim, December 13, 2015 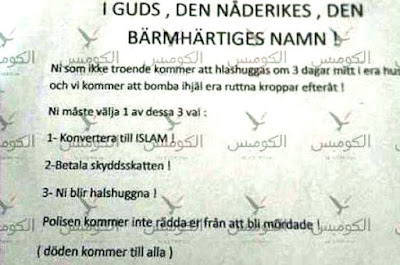 According to a report by RT Arabic published on December 12, the “Swedish government is in a state of panic after dozens of its citizens received threatening letters signed by ISIS and offering them three choices, either conversion to Islam, payment of jizya, or decapitation.”

The letters warned their recipients that they had three days to decide.

Written in the Swedish language, the letters appeared yesterday on dozens of homes in different cities at the same time.  Police are reportedly taking the threat “very seriously.”  Among other regions, letters appeared in the cities of Ronneba, Sigtuna, Vstroes and the capital Stockholm.

Along with threatening those who refuse to convert to Islam or pay the jizya with death, some letters also threatened their recipients with “the bombing of theirs roofs above their heads.”  The letters further warned that the police will not save recipients of the letters and that “death would extend to all.”

The complete translation of the above letter follows:

In the name of Allah, the merciful, full of grace.

You who are not believers will be decapitated in three days in your own house; we will bomb your rotten corpses afterwards.  You must choose between these three choices:

3. Or else, you will be decapitated.

The police will not prevent or save you from you being murdered. (Death comes to all of you).