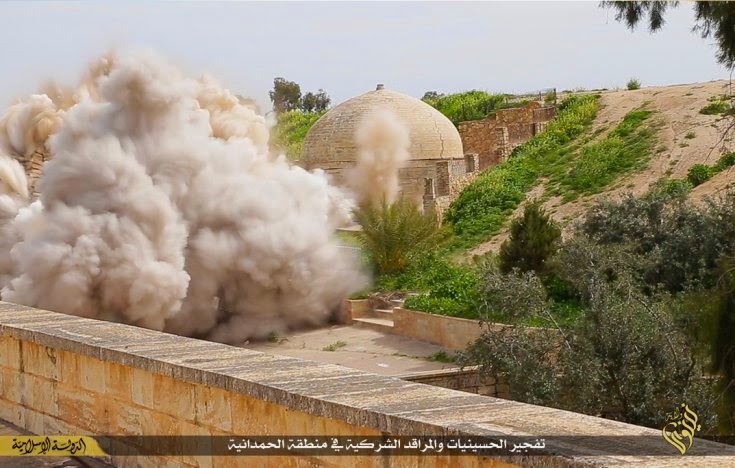 Islamic State (Isis) militants have allegedly blown up parts of the ancient monastery of Mar Behnam near the predominantly Christian town of Qaraqosh, south-east of Mosul, according to pictures from IS media shared on twitter and a Kurdish media report.

The photos, released by IS members, show the 4th-century monastery's tomb complex of Mar (Saint) Behnam and Mart (Saint) Sarah reduced to rubble.

Dr Nicholas al-Jeloo, an expert on Assyrian monasteries in Iraq from the University of Melbourne, visited the monastery, previously run by the Syriac Catholic Church, in January 2010 and confirmed the authenticity of the pictures to IBTimes UK.

"I didn't want to see the pictures. This is terrible. I'm in shock," he said.

The monastery was founded in the 4th century and built on the tomb of Berhnam and his sister Sarah, who were converted to Christianity by St Matthew.

They were the children of a local Assyrian ruler named Sennacherib, a pagan, who grew angry and killed them both along with 40 soldiers who had supported them when they refused to convert back to paganism. The king later also converted to Christianity on his deathbed.

"This story intimately connects us to the ancient Assyrian heritage," Al-Jeloo said.

The monastery is known for its carvings and features, including "very intricate inscriptions in Syriac, in Armenian and in Uygur, a Turkic language from Western China" said Al-Jeloo.

"The place is a major site of pilgrimage, at the very origins of Christianity in the region, and it links us to our ancient Assyrian heritage - being only a stone's throw from the ruins of Nimrud, also destroyed by Isis. The only way I could describe it is as a work of art. It was one of the most richly carved monastery complexes in northern Mesopotamia up until today," he said.

The structure of the church that we have now dates back to the 14th century, with a lot of later additions and restoration works over the years.

Like all the churches in that area, it was founded by the Assyrian Church of the East, but later in the 7th century it became part of the Syriac Orthodox Church.

When the majority of people in the nearby town of Qaraqosh converted to the Catholic church to the 19th century, the church changed hands to the Syriac Catholic Church.

"IS is destroying the rich cultural fabric of the area, the multilayered, multilingual, multi-ethnic aspects of society," Al-Jeloo said. "It's not just our heritage, it's the heritage of the world. It is part of our history, and now it's gone."

The monastery also had a huge collection of manuscripts dating back centuries. "Luckily, all of them have been digitised," he said.

Most of the buildings and the facade of the monastery have been restored during Saddam Hussein era in the 1980s.

IS fighters stormed the monastery in July 2014 and expelled its resident monks.

A member of the Syriac clergy quoted the militants as saying to the monastery's residents: "You have no place here any more, you have to leave immediately." The monks asked to be allowed to save some of the monastery's relics but the IS militants refused, according to the BBC. They walked for several miles before being rescued by Kurdish fighters.

The latest incident comes after an IS-linked Twitter account posted pictures of what appears to be jihadists smashing crosses and defacing holy statues, Christian murals and paintings at St George Chaldean Catholic monastery near Mosul.

The monastery, located on the Ba'werah neighbourhood on a hill north of Mosul on the other side of the Tigris river, was founded by the Assyrian Church of the East in the 10th century but rebuilt as a seminary by the Chaldean Catholic Church in 1846.

Earlier in March, IS militants reportedly bulldozed the 2,000-year-old city of Hatra and the Nimrud archaeological site near Mosul.

On 26 February, the jihadist group published a video showing militants destroying artefacts in a Mosul museum and at the Nergal Gate to ancient Nineveh.

More about Isis attempts to erase Christian heritage
Posted by Zosimas at 7:00 AM